It may have felt like scientists were all-hands-on-deck battling the pandemic. But plenty of researchers learned amazing things this year that had nothing to do with COVID-19. 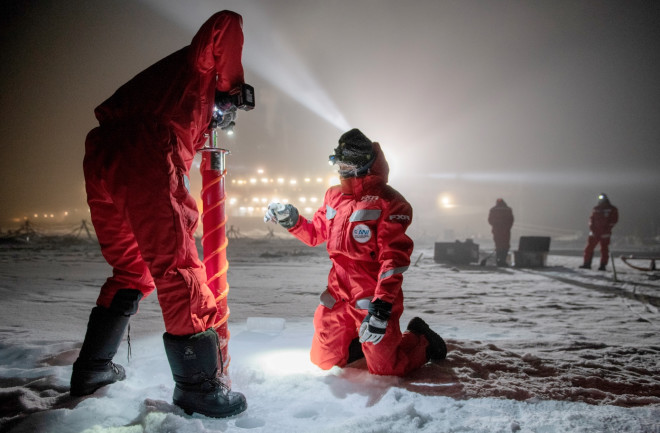 For many, 2020 has been a year that we’d just as soon forget. But a lot of good has happened that had absolutely nothing to do with the COVID-19 pandemic. The Discover editors teamed up with our top writers to pick the 10 most important (non-COVID) science stories we didn’t want you to miss.

SpaceX launched the first privately owned capsule carrying NASA astronauts to the space station and back.

Before Gmail, YouTube or Facebook, a starry-eyed rocket startup company announced a fantastical vision: a new age, where private companies send humans into space. And in May 2020, some 18 years after its founding, SpaceX and its CEO, Elon Musk, finally made good on that pledge. The SpaceX Crew Dragon capsule carried two NASA astronauts to the International Space Station (ISS) and brought them back to Earth safely. It was the first time a private spacecraft had carried humans into orbit. Read the full story.

MOSaiC made history as the world's largest polar expedition.

Most of the crew aboard the RV Polarstern icebreaker was asleep when the Arctic Ocean ice they were frozen into fully dissolved in late July. Researchers had called the ship home for 10 months — and this was not part of the plan. The team of pilots, climatologists, oceanographers and others had deliberately frozen the ship into the ice floe north of Siberia in October 2019. Their mission: Drift for more than 365 days with the floe and surrounding sea ice to study the Arctic climate. With roughly 600 experts from around the globe, and a cost topping $150 million, the Multidisciplinary drifting Observatory for the Study of Arctic Climate (MOSAiC) is the biggest, most elaborate Arctic expedition ever. Read the full story.

An estimated 32 million Americans have food allergies — nearly 10 percent of the population, and 10 times the prevalence reported just three decades ago. Among children, emergency room visits for the severe, potentially life-threatening reaction known as anaphylaxis are skyrocketing. But new hope arose in January, when the Food and Drug Administration approved Palforzia, the first drug designed to desensitize patients to an allergenic foodstuff — specifically, peanuts. Read the full story.

With a tail like an eel and a snout like a crocodile, Spinosaurus became the first-known aquatic dinosaur.

Spinosaurus Aegyptiacus is a fan favorite, its sail-backed shape appearing everywhere from museums to a starring role in the Jurassic Park franchise. In April, paleontologists announced a fossil that further solidified its image: The discovery of a long, paddlelike tail marked Spinosaurus as the first known semi-aquatic dinosaur. Read the full story.

Astronomers discover an ocean on Ceres, a dwarf planet in our own solar system.

Crouched in the rocky confines of the asteroid belt between Mars and Jupiter, an icy sphere the size of Texas has been hiding a secret. This dwarf planet, called Ceres, is actually an ocean world, astronomers revealed in 2020. And it’s far from the only one: Scientists have found the best evidence yet that Pluto (also located in a distant part of the solar system strewn with small space rocks) has an active underground ocean, as well. Read the full story.

Carbon dioxide emissions actually leveled off a bit — even before COVID-19 started shutting things down. Experts credit a shift to renewable energy sources.

As the arc of coronavirus misery rose in 2020, a hopeful development on another dangerous curve may have escaped your attention. The curve tracking the rise of global carbon dioxide (CO2) emissions from energy use went totally flat in 2019, according to a report released in February by the International Energy Agency (IEA). Another international report found very slight growth in global emissions during the same time span, compared with prior years. Either way, this flattening happened before COVID-19 temporarily hampered economic activity and carbon output. So, the promising CO2 trend stems from other factors: plunging use of coal in many economies and gains in renewable energy, according to the IEA report. Read the full story.

Physicists discover a new type of particle: An anyon.

After decades of exploration in nature’s smallest domains, physicists have finally found evidence that anyons exist. First predicted by theorists in the early 1980s, these particle-like objects only arise in realms confined to two dimensions, and then only under certain circumstances — like at temperatures near absolute zero and in the presence of a strong magnetic field. Physicists are excited about anyons not only because their discovery confirms decades of theoretical work, but also for practical reasons. For example: Anyons are at the heart of an effort by Microsoft to build a working quantum computer. Read the full story.

For the first time, scientists physically detected fluctuations at the quantum level.

The Advanced Laser Interferometer Gravitational wave Observatory (LIGO) can measure giant ripples in space-time that race across the cosmos. But in 2019, physicists used it for something else: to measure fluctuations at the quantum scale that jiggle the detector’s super-sensitive mirrors. They published their report in Nature in July. Theorists have long predicted this behavior at the interface of light and matter, but this study is the “first to experimentally prove it” at such large scales and at room temperature, says physicist Haocun Yu of the MIT Kavli Institute, who worked on the project. It’s also the first time that scientists have quantified these quantum effects. Read the full story.

The Marine Corps Air Station Miramar, near the sunny coast of Southern California, is partially solar powered. Distributed across 24,000 acres, the solar grid is self-contained and secure, but energy production can drop precipitously when storms roll in — with no way to ramp the panels’ electricity production up or down in sync with the weather. But earlier this year, the Marines enlisted a technology more commonly associated with a brand-new Samsung Galaxy than a military compound: The station contracted Verizon to build a private 5G cellular network. Read the full story.

Imagine gazing up at a dark sky on a clear summer night and seeing more satellites crawling across the heavens than stars. That could soon be a reality: A small group of companies is working to launch so-called satellite mega-constellations to provide global high-speed internet that will leave current satellites in the dust. Amazon got approval in July to launch its satellites; others, including SpaceX and the U.K.-based OneWeb, have already started. In 2020, SpaceX turned heads by launching more than 700 Starlink satellites into space. Read the full story.