With a Tail Like an Eel and a Snout Like a Crocodile, Spinosaurus Became the First-Known Aquatic Dinosaur

More than a century after its discovery, one of the strangest dinosaurs of all time is swimming into focus. 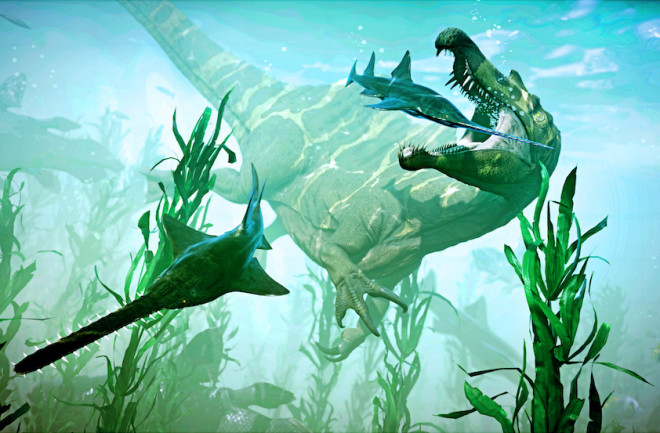 This article appeared in Discover’s annual state of science issue as “A Water-Dwelling Dino, Lost and Found.” Support our science journalism by becoming a subscriber.

Spinosaurus Aegyptiacus is a fan favorite, its sail-backed shape appearing everywhere from museums to a starring role in the Jurassic Park franchise. In April, paleontologists announced a fossil that further solidified its image: The discovery of a long, paddlelike tail marked Spinosaurus as the first known semi-aquatic dinosaur.

The current model of Spinosaurus took over a century to assemble. In 1915, German paleontologist Ernst Stromer named Spinosaurus, a carnivorous dinosaur that stalked Cretaceous Egypt and bore a tall sail on its back. But, not long after the dinosaur’s description, the only known fossils were destroyed during a 1944 Allied bombing raid of Munich. Spinosaurus was lost to science.

Bits and pieces turned up over the following decades. Scraps bobbed out of the strata of Egypt and turned up in Morocco’s fossil market. Finds of related animals started to change the image of Spinosaurus, too — shifting it from a Tyrannosaurus-like chomper to a crocodile snouted fish-eater with huge claws. Yet paleontologists were still lacking a complete specimen to validate their expectations.

That all changed in the late 2000s, when pieces of a partial Spinosaurus skeleton surfaced from a fossil collector, and later at a museum in Milan. Traced back to their source among the Kem Kem beds of Morocco, the fossil turned out to be the first reasonably complete Spinosaurus found in a century. The finds revealed that Spinosaurus had a long snout full of conical teeth and comically stubby back legs. What’s more, the dense structure of the dinosaur’s bones hinted that its skeleton had naturally steadied the animal as it swam about Cretaceous waterways.

But the reconstruction spurred controversy. The new specimen was still missing pieces, and experts disagreed on whether all the bones belonged to the same animal or even the same species.

To solve the debate, paleontologists went back to the source. “It wasn’t clear that any more of the animal was preserved in the hillside,” says Harvard University paleontologist Stephanie Pierce.

“The excavation team put [in] a lot of hard work … and crossed their fingers there were more bones to find.”

The expedition was a success. A search of the quarry that had yielded the latest specimen also turned up something new: a tail. Described early in 2020, the tail of Spinosaurus was long, thick and eel-like — no other known dinosaur had one like this.

“Although the tail was so unique, it [fit] so perfectly with the idea that Spinosaurus was aquatic,” Pierce says. “Spinosaurus had a tail fin.”

University of Edinburgh paleontologist Stephen Brusatte, who was not involved in the research, is also convinced that Spinosaurus spent a lot of time in and near the water. Still, he notes, how the dinosaur used its tail and how much time it spent swimming is up for debate. “The new tail is a neat find,” Brusatte says, but “what’s needed now are more biomechanical models of the entire animal to test how good of a swimmer it was.”