Clutter in the sky? It’s more likely than you’d think. 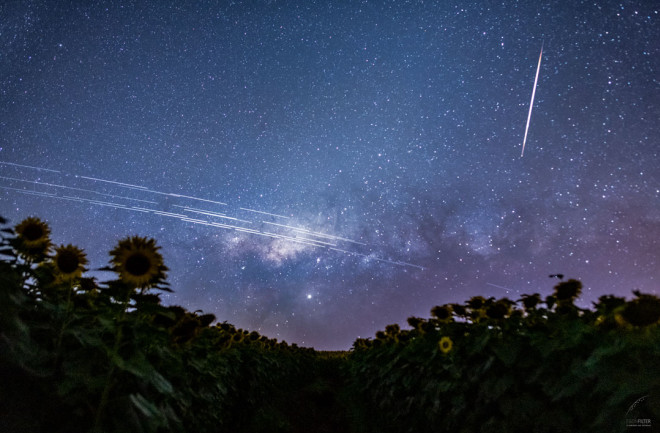 This article appeared in Discover’s annual state of science issue as “Satellite Constellations Go on Trial.” Support our science journalism by becoming a subscriber.

Imagine gazing up at a dark sky on a clear summer night and seeing more satellites crawling across the heavens than stars. That could soon be a reality: A small group of companies is working to launch so-called satellite mega-constellations to provide global high-speed internet that will leave current satellites in the dust. Amazon got approval in July to launch its satellites; others, including SpaceX and the U.K.-based OneWeb, have already started.

“We’re seeing the beginnings of a new industrial revolution in space,” says Jonathan McDowell, an astronomer at the Harvard-Smithsonian Center for Astrophysics who published one of the first studies of the impact of these satellites. “This is a phase change. We’re going from hundreds of satellites in low-Earth orbit to potentially tens of thousands.”

In 2020, SpaceX turned heads by launching more than 700 Starlink satellites into space. The company also began tests of its high-speed internet with customers in parts of North America.

OneWeb was the first to start launching its satellite constellation in early 2019, but was forced to declare bankruptcy in 2020 before being bought out and resuming operations.

Meanwhile, astronomers released the first studies of how the night sky will change. The results, so far, are troubling. Based on current plans, a major observatory in Chile, for example, would see roughly 1,000 satellites in the sky at twilight and 400 in the middle of the night — 50 to 100 times more than what is seen now.

Over the summer, hundreds of astronomers submitted a report to the National Science Foundation detailing the community’s concerns. Among the hardest hit areas of astronomy are those teams that scan for near-Earth asteroids, which are visible at twilight in the direction of the sun.

“This report shows it’s a very serious problem for astronomy and fatal for many kinds of science,” McDowell says.