This year, SpaceX launched the first privately owned capsule carrying NASA astronauts to the space station and back. NASA, as well as private companies, also made giant leaps for space travel in 2020. 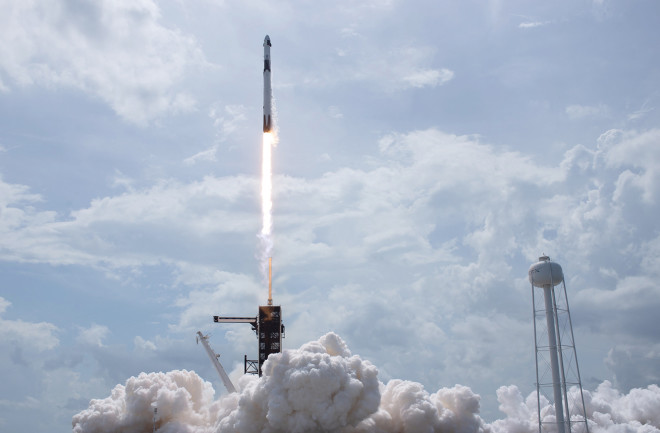 This article appeared in Discover’s annual state of science issue as “One Giant Leap for Space Travel.” Support our science journalism by becoming a subscriber.

Before Gmail, YouTube or Facebook, a starry-eyed rocket startup company announced a fantastical vision: a new age, where private companies send humans into space. And in May 2020, some 18 years after its founding, SpaceX and its CEO, Elon Musk, finally made good on that pledge.

The SpaceX Crew Dragon capsule carried two NASA astronauts to the International Space Station (ISS) and brought them back to Earth safely. It was the first time a private spacecraft had carried humans into orbit.

The milestone came just as a host of private space companies were beginning to take off. Around the world, other rocket enterprises have followed suit, launching constellations of tiny satellites that will change the way we communicate and observe Earth (read more on page 69). Industry experts say private spaceflight has now pushed into a new era, similar to how America’s railways opened the West to urban development some 150 years ago.

The year was also a pivotal one for NASA. Crew Dragon’s passengers, Doug Hurley and Robert Behnken, became the first U.S. astronauts to launch into orbit from American soil since the space shuttle program ended in 2011. Without a ride of its own, NASA had been paying Russia $90 million per seat to ferry astronauts to the ISS. A trip on SpaceX’s Falcon 9 will cost about half that price, thanks to the company’s emphasis on reusable rockets.

That backdrop set the stage for the publicity and feat of engineering this summer. Some 10 million viewers, cooped up at home during the COVID-19 pandemic, watched what NASA dubbed “Launch America.”

Crew Dragon was built as part of NASA’s Commercial Crew Program, which began under an Obama administration policy. The initiative taps the private sector for transport to and from low-Earth orbit, while NASA focuses its efforts on exploring the solar system.

But delays and controversies have long stalled the program, even as NASA has expanded on the concept. The Trump administration, for example, turned to private companies for its Artemis program to put humans back on the moon by 2024. Astronomers say Crew Dragon helped validate the concept of relying on private companies instead of large government programs.

“Low-Earth orbit is no longer the frontier. The frontier has moved farther out,” says Jonathan McDowell, astronomer at the Harvard-Smithsonian Center for Astrophysics. “NASA, whose job is to push at the frontier, doesn’t really need to be doing low-Earth orbit launches anymore.”

SpaceX wasn’t the only company hitching its future in orbit to the Commercial Crew Program. Boeing also was awarded a contract to help put NASA astronauts on the space station. For years, questions have lingered about whether either company could deliver.

In March 2019, after many delays and cancellations, SpaceX finally launched an uncrewed spacecraft to the ISS. The mission went flawlessly, but the capsule exploded months later during a routine test back on Earth. Numerous delays followed.

Then, in December 2019, Boeing’s Starliner spacecraft suffered a number of embarrassing software failures during its first uncrewed launch and failed to even reach the space station. A NASA investigation turned up dozens of corrective actions the company must take. Boeing said it planned to try again in late 2020.

Today, with the successful Crew Dragon flight behind him, Musk has already shifted to the next task. His engineers are pioneering an enormous new spacecraft, called Starship, with a promise to carry passengers to “Earth orbit, the moon, Mars and beyond.”

NASA put a modicum of faith in the project in the spring by investing $135 million into Starship’s development as a potential lunar lander in its Artemis mission. Then, in August and September, SpaceX accomplished the first true suborbital flights and landings of Starship’s second rocket stage, the part that will carry cargo and crew.

“It’s still not clear whether this thing will work,” McDowell says. “The critical milestone is: ‘Can this thing get into orbit — and ideally back?’ If they can do that, then it changes the future enormously.”

In addition to passenger ships, the past year also saw many startup companies successfully launch small rockets carrying cubesats, an emerging class of small, technologically advanced satellites. While they’ve been launched from the ISS for years, Earth-based launches are an industry first.

Jeffrey Manber, a pioneer in commercial spaceflight and the CEO of NanoRacks — the largest private user of the ISS — says an industry is starting to emerge around the station and the means to get there. Again like the railroad industry of the 1850s, even the billionaire-backed companies are still dependent on government funding.

“This is not a mature commercial marketplace yet,” Manber says. He predicts that in the next decade, more private passengers will travel to space. “You are going to see the first private destinations start to pop up. They may mark 2020 as the start of that in the [American] public consciousness.”