A Year in the Arctic: A Close-Up Look at the Biggest Ever Polar Expedition 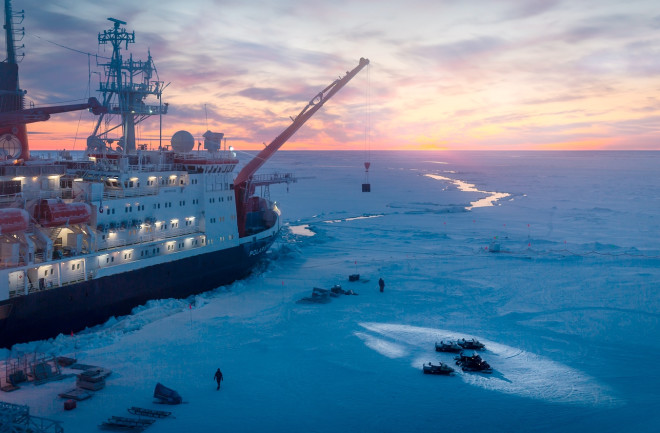 Scientists from 20 countries teamed up to spend a full year drifting with the Arctic ice on the MOSAiC research vessel. (Credit: Stefan Hendricks)

This article appeared in Discover’s annual state of science issue as “The World’s Biggest Polar Expedition.” Support our science journalism by becoming a subscriber.

Most of the crew aboard the RV Polarstern icebreaker was asleep when the Arctic Ocean ice they were frozen into fully dissolved in late July. Researchers had called the ship home for 10 months — and this was not part of the plan.

The team of pilots, climatologists, oceanographers and others had deliberately frozen the ship into the ice floe north of Siberia in October 2019. Their mission: Drift for more than 365 days with the floe and surrounding sea ice to study the Arctic climate. With roughly 600 experts from around the globe, and a cost topping $150 million, the Multidisciplinary drifting Observatory for the Study of Arctic Climate (MOSAiC) is the biggest, most elaborate Arctic expedition ever.

“Our mission is to observe and understand the climate processes of the Arctic so we can represent them better in our climate models,” says Markus Rex, expedition leader and a scientist with Germany’s Alfred Wegener Institute.

The Arctic is warming three times faster than the global average, causing sea ice to shrivel and ultimately driving shifts in interactions between the ocean, ice and atmosphere. “At the same time, it’s the region where we have the largest gaps in understanding of the climate system, and where uncertainties in climate projections are largest,” Rex says. Filling those gaps is important, because what happens in the Arctic doesn’t necessarily stay in the Arctic. Many experts say rapid change there also influences weather and climate throughout the Northern Hemisphere.

MOSAiC set out to drift across a vast swath of the central Arctic. “We wanted to track the influences on the ice throughout an entire year to help us understand how it grows and shrinks, how it moves and breaks,” says Matthew Shupe, expedition co-coordinator and an atmospheric scientist at the University of Colorado Boulder.

Although their floe broke up before the 12-month goal, Rex says the expedition has been a great success. More than 100 climate parameters were tracked and analyzed for nearly a full year, with so much data collected it could take years to fully analyze.

Falling Through the Ice

For Shupe, the magnitude of ice cracking was most surprising. “Our camp had to be reorganized many times due to large fractures and then shearing movements,” he says. These ice dynamics were particularly strong at the onset of spring 2020.

Shupe’s early interpretation is that during the summer of 2019 — the warmest Arctic summer on record at that point — the sea ice was so thin that ponds forming on the surface melted through to the ocean below. In winter, those holes froze over, along with other cracks in the ice. That made the ice weaker and prone to breaking when the team tried to conduct research out in the elements. “People would break through into the ocean, but we were all wearing flotation and could get out quickly,” Shupe says. “For those that did, they typically had a hole named after them.”

The original plan was for the Polarstern to be carried naturally past the North Pole during early spring, then near the southern edge of the Arctic’s sea ice cover in September. Instead, it reached the far edge by July, quickly spanning 1,050 miles due to unusual wind patterns and thin, faster-flowing ice. Upon the ship’s arrival, warm temperatures and swells from the open ocean began threatening the researchers’ floe and encampments on the ice.

With fractures cutting through camp, the crew began moving everything aboard the ship on July 29. “We walked across cracked areas and hopped between different chunks of ice,” Shupe says.

When they went to bed on July 30, the floe was still somewhat intact. “By the next morning, all we could see was broken pieces of ice,” floating in open water, Shupe says.

Aboard the ship, the crew promptly migrated north in search of new ice. Finding less than expected, they headed straight for the North Pole itself. In just six days, on August 19, they arrived. It was a notable moment: an icebreaker finding relatively scant ice at the North Pole.

The Polarstern eventually attached itself to a new floe to observe the autumn freeze-up. By mid-September, news came that Arctic sea ice had reached its second lowest level on record, and 2020 ranked the hottest summer ever recorded in the Northern Hemisphere.

“It’s all part of the new Arctic we find ourselves in today,” says crew member Julienne Stroeve, a climatologist with the U.S. National Snow and Ice Data Center. One aspect of the rapidly transforming climate revealed itself in February, when a seal popped its head through a hole in the ice not far from the North Pole: “I didn’t think they would live that far north, and especially in the dead of winter,” Stroeve says.