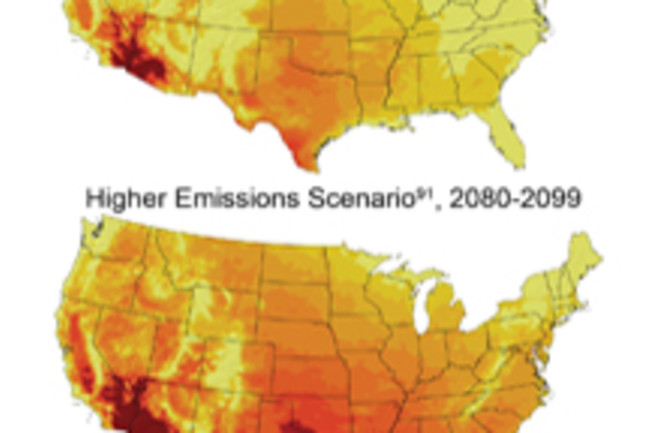 A new report from the federal government loudly makes the point that global warming is already happening, and not just in the remote reaches of Alaska.

“This report stresses that climate change has immediate and local impacts,” said Jane Lubchenco, administrator of the National Oceanic and Atmospheric Administration. “It literally affects people in their backyards” [Science News].

The report details the impacts to U.S. infrastructure like roads, sewage plants, and offshore oil drilling operations, and also takes note of the expected effects on sundry industries, from fishing in the northwest to maple sugar production in New England. The report was prepared by the United States Global Change Research Program, which includes work from 13 federal agencies and the White House; the group is required to report once a decade on the state of the global environment. While the document contains little new science on global warming, experts say it's a valuable synthesis of previous findings.

"It's not a document for scientists. It's not even a document for policymakers," said Katharine Hayhoe, a geosciences professor ... and one of 28 report co-authors. "It's a document for every individual citizen who wants to know why they should care about climate change" [Scientific American].

If emissions of carbon dioxide, the principal heat-trapping gas that causes global warming, continue to increase, the continental United States will warm by 7 to 11.5 degrees Fahrenheit by 2090, the report says. With such a temperature rise, no part of the country will be spared from drastic changes.

In the Northwest, shrinking snowpacks will reduce summertime stream flow, straining water resources. In Alaska, summers will be hotter and drier, and as a result the number of wildfires and insect infestations will increase. In the Southeast, hurricanes and sea level rise will conspire to boost damages from storm surges. A large number of ecosystems, from trout-filled streams of the Northwest to coral reefs off the Florida coasts, will suffer, as will the tourism and recreation that they support, the report suggests [Science News].

The report has been in the works for several years, and an earlier draft of the document was released online last July by the Bush administration. Still, the timing of the final report's release seems fortuitous.

A bill to cap U.S. carbon emissions, sponsored by Democratic Representatives Henry Waxman and Edward Markey, is making its way through Congress and could be up for a vote in the House of Representatives as soon as next week [Time].

The report's authors say, however, that it

was not meant to back a specific policy proposal, but they underscored the consequences of failing to reduce carbon dioxide emissions [Reuters].