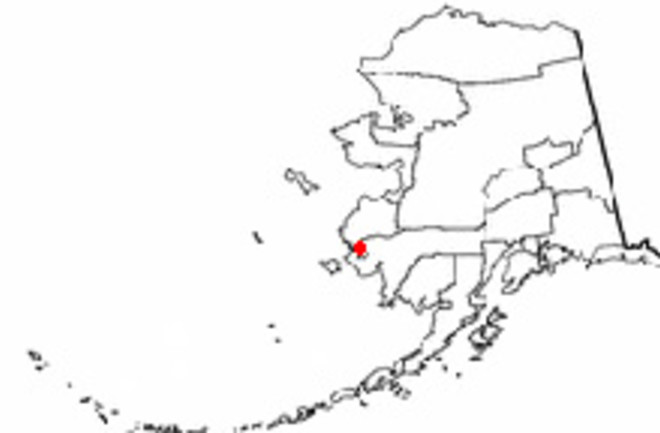 The 340 residents of Newtok, Alaska will soon be among the first "climate refugees" in the United States. Global warming has battered the tiny coastal town:

As average yearly temperatures rise, coastal ice shelves melt as does the permafrost on which the town sits. The Ninglick River has overtaken the town as the ground level simultaneously sinks [Backpacker blog].

As a result, the town's scattered buildings are connected by a network of boardwalks across the mud. With the forces of nature arrayed against them, the townspeople have now voted to relocate their town to a new site nine miles inland, on higher ground by the river.

"We are seeing the erosion, flooding and sinking of our village right now," said Stanley Tom, a Yup'ik Eskimo and tribal administrator for the Newtok Traditional Council.... The U.S. Army Corps of Engineers has estimated that moving Newtok could cost $130 million. Twenty-six other Alaskan villages are in immediate danger, with an additional 60 considered under threat in the next decade, according to the corps [CNN].

Architects have already designed an evacuation shelter to be built at the site of the new town, and the U.S. military will build a temporary road to the shelter locale this summer. The shelter will have

wood-heated steam baths, a gravity-fed sewer system and a permafrost-chilled cellar. Construction of the 8,500-square-foot shelter could begin next year.... The shelter, designed like a huge Quonset hut with a boxy wing on one side, will be a critical step for residents looking for a way to leave their village [The Arctic Sounder].

The townspeople's decision illustrates global warming's impact on people living near the Arctic. While the Yup'ik Eskimos of Newtok were making their decision, the first Indigenous Peoples' Global Summit was taking place in Anchorage, Alaska, with representatives from 80 nations on hand to discuss how global warming is affecting their communities.

Indigenous people are among those contributing least to the worsening problem of greenhouse gases and climate change, said Miguel d'Escoto Brockmann, president of the United Nations General Assembly. However, he said they are the first to feel the impacts of climate change [AP].