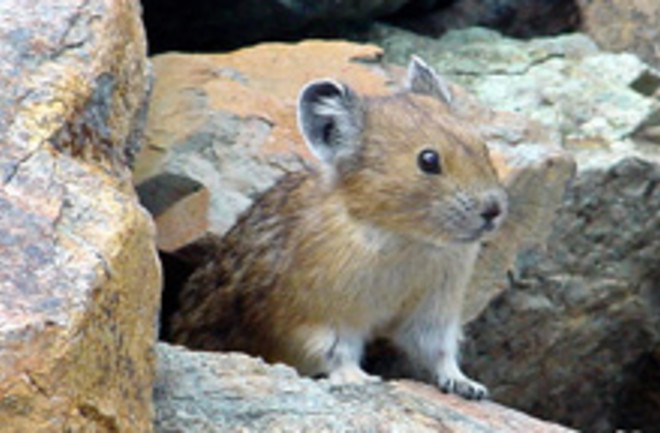 The American pika, a short-legged, hamster-sized fur ball that huddles in high mountain slopes [AP] and inhabits 10 Western states, may become the first species in the lower 48 states to be listed as endangered due to global warming. The U.S. Fish and Wildlife Service will decide by May 1 whether or not the pika, whose populations are dwindling, should be studied in depth and included on the endangered species list. Studies have shown that the little animals have already been forced to higher altitudes because of rising temperatures; one study in particular, from 2005, showed that pikas lived at 5,700 feet above sea level at one point, but now average higher than 8,000 feet. They are now running out of mountain and face possible extinction if average temperatures continue to push higher [The Guardian]. The pika is "feeling an exaggerated brunt of global warming. Unlike others, it can't move north. It's stuck"[AP], said Greg Loarie, an environmental lawyer. Part of the problem is that the pika's peculiar traits are suited for alpine conditions: dense fur, slow reproductivity and a thermal regulation system that doesn't do well when temperatures get above about 78 degrees. "There's not a lot of wiggle room with these guys," [geologist Erik] Beever said, referring to the small difference between pikas' mean body temperature and the temperature at which they die [AP]. But not everyone agrees that the pika is endangered. While they face serious threats in certain parts of the West where global warming is expected to produce the most drastic temperature changes in the country, their populations seem to be holding steadier in other areas, such as the Sierra Nevada mountains. The upcoming decision by the Fish and Wildlife Service is a result of a federal lawsuit brought by the Center for Biological Diversity to protect the pika, but the pika's inclusion on the endangered species list will pose a whole set of new questions similar to ones raised when the polar bear was listed last year. That decision was quickly followed by regulations that ensured projects, even if they contributed to global warming, would not be blocked. And it's unclear exactly what steps could be taken to protect the pika from climate change. Recovery plans could address other specific threats such as grazing or roads—or target certain pika subspecies—but climate change has international causes and implications[AP]. Related Content: DISCOVER: Polar Bears (Finally) Make the Endangered Species List 80beats: Investigating the Death of Macho B, America’s Last Known Wild Jaguar 80beats: Bye Bye Birdie? One-Third of American Birds Are in Decline 80beats: The World’s Endangered Species List Is Endangered 80beats: Should Humans Relocate Animals Threatened by Global Warming? 80beats: Plants “Climb” Mountains to Escape Global Warming