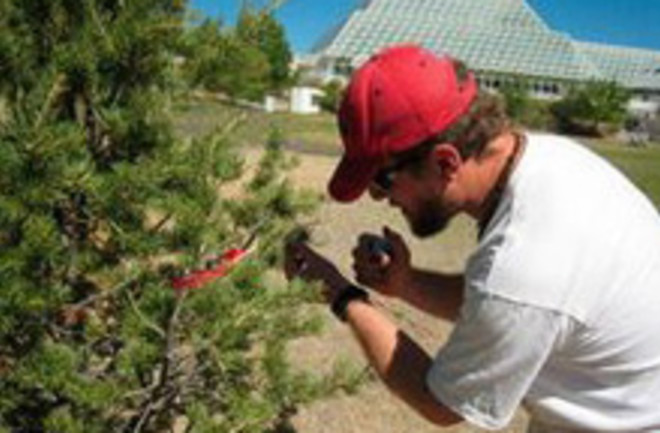 Researchers have found that droughts kill pine trees faster when temperatures are higher, a piece of information that bodes ill for forests in a warmer world. A new study examined the effect of dry conditions and temperature on the pinion pine, a hardy evergreen that lives in the American Southwest, and found that "

together, drought and temperature can kind of provide a double whammy," said David Breshears, a researcher involved in the experiment [Reno Gazette Journal].

Researchers could isolate the impact of heat due to the unusual environment where the experiment took place.

The study was conducted in Biosphere 2, a glass and steel laboratory that includes recreations of the planet's savannas, deserts, oceans and forests.... Half the pinions studied were kept in normal temperatures, the others in an environment 7 degrees warmer. Some trees in each group were then deprived of water to simulate droughts common in the past [AP].

Trees subjected to higher temperatures died five times faster than the other trees, suggesting that

even short droughts could produce widespread tree mortality in a warmer climate [AP].

The study was published in the Proceedings of the National Academy of Sciences. Researchers say they've seen the phenomenon play out in the real world, beyond the Biosphere's glass walls. They note that the pinion pine

is adapted to life in the hot, parched American Southwest, so it takes more than a little dry spell to affect it. In fact, it requires a once-in-a-century event like the extended drought of the 1950s, which scientists now believe led to widespread tree mortality in the Four Corners area of Utah, Colorado, New Mexico and Arizona. So, when another drought hit the area around 2002, researchers were surprised to see up to 10% of the [pinion] pines die off, even though that dry spell was much milder than the one before [Time]

. The difference, researchers believe, was the five decades of global warming that had transpired. Henry Adams, lead researcher of the new study, explains that pinion pines try to wait out short droughts.

"They simply close their pores to not let water out so they are not losing water," Adams said. "But they aren't able to take in carbon dioxide from the atmosphere needed to photosynthesize. If the drought goes on long enough, they run out of stored energy from photosynthesis and die," he said. "At higher temperatures, they run out of stored energy faster and die sooner" [Tucson Citizen].