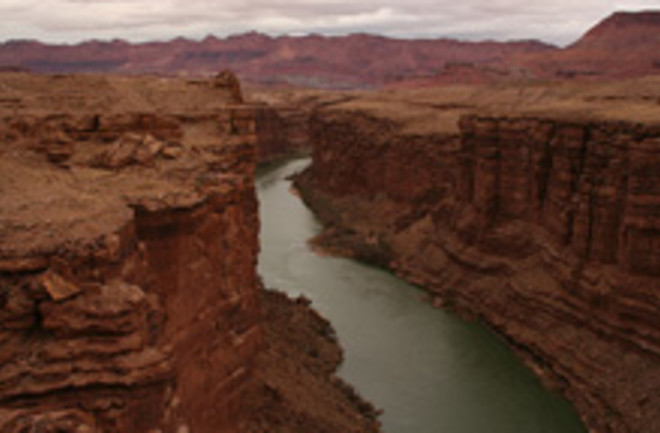 If global warming trends continue unabated, the Colorado River won't have enough water to supply the 27 million people who depend on it, according to a new study.

Less runoff — the snow and rain that fortify the 1,400-mile river — caused by human-induced climate change could mean that by 2050 the Colorado won't be able to provide all of its allocated water 60 percent to 90 percent of the time, according to two climate researchers [AP].

The Colorado River flows through seven states in the American Southwest and continues into Mexico. It supplies water to households, businesses, factories, and farms, and is also home to several endangered species of fish. The study's lead researcher, Tim Barnett, says that the findings indicate that tough decisions will have to be made

about who will get less water. Agricultural operations use about 80 percent of the water taken out of the Colorado, Barnett said. He knows the arguments, though: Shorting farms could drive up food prices. Curbing development in cities and suburbs will make developers unhappy. Whatever the case, he said, some decisions need to be made soon. "The actions that need to be taken aren't going to be fun," Barnett said. "It's not going to be life as usual" [AP].

The researchers say the study, published in the Proceedings of the National Academy of Sciences, should be a wake-up call that encourages new water conservation efforts. In Arizona, officials have pushed more drastic

proposals to add water to the river's flow. Among the plans under review are cloud-seeding, injecting salt or other substances into storm clouds to increase rain or snow; the use of desalination plants for seawater and brackish groundwater; and efficiency measures such as lining canals to keep water from seeping into the ground [Arizona Republic].