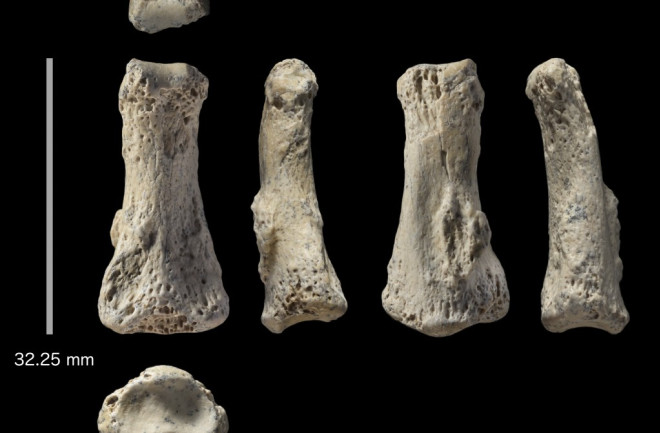 Found at the site of Al Wusta, in the Arabian desert, this fossilized finger bone establishes our species had moved well beyond Africa by 85,000 years ago. (Credit Ian Cartwright) Well, well, well...you could say a new and highly significant fossil is really giving the finger to the human evolution and migration timeline once considered all but carved in stone. A discovery in the Arabian desert confirms Homo sapiens had wandered far beyond our ancestral African homeland thousands of years earlier than previously thought. Over the past few years, a number of separate research teams have been turning up evidence, including fossils, artifacts and genetic data, that have toppled the crusty old timeline for human evolution and dispersal beyond Africa. For decades, the now-stale story of our evolution and migration across the planet was thought to begin in Africa about 200,000 years ago with the emergence of archaic H. sapiens, followed by anatomically modern humans evolving about 100,000 years ago and leaving our homeland anywhere from 45,000-60,000 years ago. But then finds that contradicted the old timeline started showing up, such as the 300,000-year-old archaic H. sapiens from Jebel Irhoud in Morocco and signs of modern humans as far from Africa as Indonesia by 73,000 years ago. At the end of 2017, based on the piles of new evidence that have emerged from multiple disciplines, paleoanthropologists called for a new model of the human story to be embraced by the field (though, as with any scientific advance, holdouts remain). The revised timeline goes something like this: Humans emerged as a species more than 300,000 years ago (and probably even earlier) and began leaving Africa to explore Eurasia, starting with the Levant and sites such as Skhul and Qafzeh, at least 120,000 years ago. And in just the last couple months, another find has suggested even the new model is outdated: The fossil from Israel known as Misliya-1 pushed back the presence of modern H. sapiens beyond Africa to at least 177,000 years ago. Going Green Amid the flurry of discoveries, teams have been combing the Arabian desert for more than a decade in search of an early human presence. Projects such as Palaeodeserts have allowed researchers to recreate the Arabian Peninsula's past climate and determine that it was once a far more hospitable place, precisely the sort of environment that would attract our species. Satellite imagery and other methods, for example, have revealed that Arabia was once home to 10,000 lakes, some filled by monsoonal rains and only seasonal, but many others existing year-round. This detailed understanding of "Green Arabia," and the specific location of the fossil, is important because the path of human migration out of Africa continues to be debated. Although evidence of the earliest exodus has been found in Israel, suggesting H. sapiens took a northern route (the "Levantine corridor") around the Red Sea, some researchers believe at least a few bands of humans must have chosen a southern route, crossing at what's now the strait of Bab el Mandeb between Djibouti and Yemen. Both of these proposed routes, however, suggest that the early humans stayed close to coastlines.

Human fossils found at sites in Israel such as Misliya, Skhul and Qafzeh have suggested a northern route of exodus for the earliest human explorers, although some researchers argue a southern route was also possible. Today's fossil find comes from Al Wusta, however, deep in the interior and hundreds of kilometers across the Arabian desert from either of the hypothesized routes. (Credit Nature Ecology & Evolution, Henry 2018; inset image map data Google 2018) Regardless of how humans arrived in Green Arabia, they would have found a veritable land of plenty. But, although previous digs had turned up stone tools pointing to a human presence there during this early Out of Africa period, a "smoking gun" human fossil had eluded researchers. Until today. The Dating Game In a study published in Nature Ecology & Evolution, researchers detail an intermediate phalanx, or finger bone, that was found at the Arabian desert site of Al Wusta. And yes, according to study co-author and University of Oxford archaeologist Huw Groucutt, addressing the media last week, "We think it's the middle finger." Sophomoric joking aside, what's really important about the finger find is that its size and shape are consistent with H. sapiens rather than Neanderthals. A deformity visible on one side appears to be an abnormal bony growth called an enthesophyte, which typically results from trauma or repeated stress to the bone at the location. The bone also appears to show signs of intense manual activity. Direct dating of the finger bone suggests it is at least 85,000 years old, making it one of the oldest H. sapiens fossils ever found outside Africa. Authors of the study call AW-1, as it's formally known, "the oldest directly dated fossil of our species outside Africa and the Levant," and it's an important distinction to make, since older fossils, controversially described by other researchers as H. sapiens, have been found in China. A directly dated fossil is pretty much what it sounds like: Researchers are able to date the fossil itself, in this case through radiometric dating, rather than estimate a date based either on artifacts found with it or on the age of sediment and other material immediately above or below it. In the case of AW-1, in addition to directly dating the finger bone through a technique called uranium series dating, the team confirmed its age by also dating material around it, including hippopotamus remains and sediments, using a variety of methods as a cross-check. Based on paleoclimate research, the area around Al Wusta, in the interior of the Arabian Peninsula, would have been semi-arid grassland populated by mainly African animals — more than 800 vertebrate fossils were found in the vicinity. The site included a freshwater lake that would have been a few meters deep year-round. Nearly 400 stone tools have been found at Al Wusta, suggesting, says Groucutt, "There were a lot of people living there...a dense human occupation." Of course, "dense human occupation" during the Late Pleistocene, when this all went down, does not mean a city or even a town. The early human explorers were highly mobile hunter-gatherers, probably living in groups of 20-40 people based on traditional hunter-gatherer societies that persist today. Also, don't get your hopes up about researchers finding any ancient DNA in the fossil. Yes, other teams have managed to extract genetic material from much older hominin fossils, such as those at Sima de los Huesos in Spain, which clocked in at 430,000 years old, but ancient DNA preservation requires both precise conditions — including cold — and a ton of luck. The process of extraction is also destructive to the fossil itself, so the team isn't going to go grinding up the precious find knowing it almost certainly won't yield any DNA. Walk This Way What exactly does the fragment finger fossil of Al Wusta tell us? Well, a lot, and not all of it fits into the new model of human migration. Let's take another look at that new model of human dispersal proposed last December — one of its co-authors, Michael Petraglia, is also co-author of today's AW-1 paper, and one of the leading voices in the recent push to focus on previously ignored areas, including Green Arabia, that may hold clues to a greater understanding of human dispersals out of Africa. The model proposed in December had a few small waves of migration occurring roughly 100,000-120,000 years ago, possibly confined to the Levant, followed by a lull and then the real tsunami of anatomically modern humans, who spilled out of Africa about 65,000 years ago. Al Wusta falls in between those early and late dispersals, suggesting either that the earliest waves were more successful than thought, and reached the interior of what's now the Arabian desert, or that the waves never stopped, and groups of humans were fanning out beyond Africa throughout the period, rather than in two pulses. In a commentary published alongside today's study, University of Tulsa anthropologist Donald Henry claims that the stone tools found at Al Wusta are more similar in style to tools from Africa than to those found at the Levant sites, which to him suggests the people who used them were culturally closer to humans still in Africa. That could mean, offers Henry, that Al Wusta provides evidence of humans leaving Africa by the southern route and the strait of Bab el Mandeb. Petraglia, however, distanced today's paper from that suggestion. He notes that, even with lower sea levels during various periods of the Late Pleistocene, the crossing at Bab el Mandeb would have required watercraft of some kind. And it's logical to assume that if you had watercraft, you'd stick to the coastline rather than venture deep into the interior. The northern route from Africa into the Levant — and, theoretically, to Al-Wusta if you hanged a right and headed southeast for 650 kilometers — is much more straight-forward. Says Petraglia: "It would have been very easy just to walk across Sinai and into Arabia."

Researchers survey the Al Wusta site while the drama and beauty of the Arabian Peninsula — now a desert but once a lush and habitable green land— unfolds around them. (Credit Klint Janulis)