When Neanderthals Replaced Us 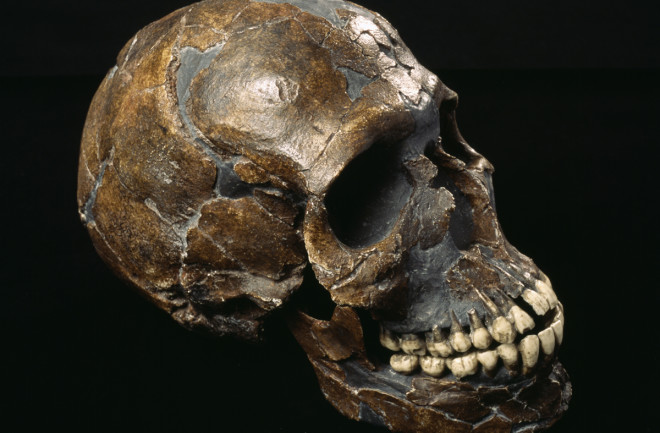 Within Israel’s Qafzeh Cave, researchers found evidence of a sophisticated culture and remains of modern humans that are up to 100,000 years old. (Credit: Pascal Goetgheluck/Science Source)

About 100,000 years ago, tall, long-limbed humans lived in the caves of Qafzeh, east of Nazareth, and Skhul, on Israel’s Mount Carmel. Their remains suggest a surprisingly sophisticated people defying the conventional timeline of Homo sapiens’ migration out of Africa. But ultimately, the Skhul and Qafzeh residents did not survive.

The Skhul-Qafzeh people gathered shells from a shoreline more than 20 miles away, decorated them and strung them as jewelry. They buried their dead, most likely with grave goods, and cared for their living: A child born with hydrocephalus, sometimes called water on the brain, lived with profound disability until the age of 3 or so, a feat only possible with patient, loving care.

So advanced were their artifacts that, for years after their discovery in the late 1920s, most archaeologists believed the people had evolved from the Neanderthals whose remains were found in neighboring caves. For decades, researchers theorized that the Skhul-Qafzeh populations represented a “missing link” between Neanderthals and us.

Beginning in the late 1980s, however, more precise dating techniques upended that notion. The Qafzeh humans were around 92,000 years old, and the Skhul people were even older, averaging about 115,000 years. The age of the Skhul-Qafzeh people challenged the widely held idea that Homo sapiens had not left Africa until about 60,000 years ago. Even more startling: Almost all the Neanderthal remains were significantly younger. The Skhul-Qafzeh people were not an elusive missing link between Neanderthals and humans. They were humans, and Neanderthals had replaced them.

Since Darwin, we have debated the relationship between Neanderthals and humans. Neanderthals sometimes seem like our defining Other, recognizably human yet not: Homo sapiens in a funhouse mirror that pushes the face forward yet obliterates the chin; inflates the brow ridge yet compresses the skull; and bulks out the chest yet truncates the lower limbs. Our elders by 200,000 years or more, Neanderthals often have been judged by us as inferior. Did we evolve from them, mate with them, murder them, outcompete them? Whatever happened, we won.

But our victory was far from a foregone conclusion, says archaeologist John Shea. “Until around 100,000 years ago, a dispassionate observer would have no basis for predicting either the extinction of rival human species or Homo sapiens’ current global ecological dominion,” Shea says.

The mostly complete cranium and mandible known as Skhul 5 was among the remains of 10 individuals found at the Israeli site. (Credit: Natural History Museum/Alamy Stock Photo)

For hundreds of thousands of years, Neanderthals survived harsh climates with bitterly cold temperatures — not to mention predators including scimitar cats and cave lions — using simple tools and primitive clothing. They were a long-lasting and successful lineage.

Skhul-Qafzeh may be one example of Neanderthals outcompeting humans, albeit indirectly; Shea and other researchers note there is no strong evidence of direct physical conflict, or even that both species occupied the area at the same time.

Another popular theory is similarly imperfect. If the Skhul-Qafzeh people interbred with Neanderthals, the sites should contain remains of both species deposited at the same time — but they don’t.

Instead, the dominant theory for Neanderthal success at Skhul-Qafzeh is that 21st-century bête noire: climate change. Around 75,000 years ago, close to the time the Homo sapiens of Skhul and Qafzeh disappear from the fossil record, the climate in the Levant shifted in Neanderthals’ favor. Rapid glaciation left the region both cooler and drier. Steppe-deserts advanced, and forests retreated.

Neanderthal bodies were adapted for colder conditions. Their stocky, barrel-chested build lost less heat and offered plenty of insulating muscle, and their systems were streamlined to extract calories from food and turn them into body heat. The Skhul-Qafzeh people’s slender physiques were better at getting rid of heat than making it. Or, as Shea says, “Neanderthals liked cold and dry. Our ancestors liked warm and wet. It got cold, and humans retreated.”

Rather than the missing link, then, the Skhul-Qafzeh people seemed to represent a rare tale of failure in Homo sapiens’ official record. They came from Africa, reached the Levant, then retreated or went extinct before a second, successful wave of African Homo sapiens arrived in the region around 60,000 years ago.

Last year in the journal Nature, physical anthropologist Israel Hershkovitz described a 55,000-year-old human skull found in Manot Cave, near the Skhul and Qafzeh sites. Despite the skull’s proximity to the earlier sites, Hershkovitz does not believe it challenges the theory that the Skhul-Qafzeh people died out or moved away. Instead, he sees all the fossils in these caves as disparate remnants of a succession of small populations. Whether they were hunter-gathering bands or larger tribes, each group, in turn, reached the caves and found them favorable, but ultimately went extinct.

“Each cave was inhabited during thousands of years by many different groups who never actually met each other,” he explains. “Each group was isolated from the other with probably a lot of inbreeding.”

Hershkovitz considers his find an entirely separate lineage, a new arrival distant in time from the people of Skhul and Qafzeh by 40,000 years or more. While analysis of their DNA might solve many of the riddles about these early people, researchers so far have been unable to extract usable genetic material from the remains.

Extinction Is the Rule

Some researchers believe the Skhul-Qafzeh people were not small, isolated groups but part of a broader early movement out of Africa and into Eurasia.

In Saudi Arabia’s Empty Quarter, University of Oxford professor Michael Petraglia is in the middle of a multidisciplinary project called Paleodeserts. These desert landscapes were once fertile lake lands, and Petraglia’s team aims to unlock the role they played in human expansion. So far they have found many tools, but not one human fossil. “We know that some form of human definitely penetrated Arabia, and that some of the dates of those sites coincide with the appearance of Homo sapiens in the Levant around 100,000 years ago,” says Petraglia. According to this hypothesis, the Skhul-Qafzeh people represent the western edge of a larger wave of migration that likely continued into Eurasia. Did their contemporaries on the move also go extinct?

“The extinction of hunting and gathering populations [was] probably far more common than we realize today,” Petraglia says. “In Sahara, Arabia, the Thar Desert of India … clearly populations got into those places, but we don’t know what happened to [them].”

One intriguing possibility surfaced in Nature in February. A team analyzing multiple Neanderthal genomes uncovered strong evidence that humans and Neanderthals had interbred more than 100,000 years ago — that’s tens of thousands of years earlier than we thought. The genetic admixture appeared in an individual found in Siberia, but not in the European Neanderthals also analyzed in the study.

“It suggests that the interbreeding event may have happened in the Middle East, and that lineage then migrated east” without additional contact with Europe, says Adam Siepel, a quantitative biologist at New York’s Cold Spring Harbor Laboratory and a co-team leader for the study.

While evidence of such early contact between the two species has yet to be found at Skhul and Qafzeh, the new study adds to the theory that Neanderthals were successful, spreading across Europe and Asia, at a time when humans seem to have faltered, gone extinct or retreated back to Africa. It begs the question: Which species was, at least for a time, superior?