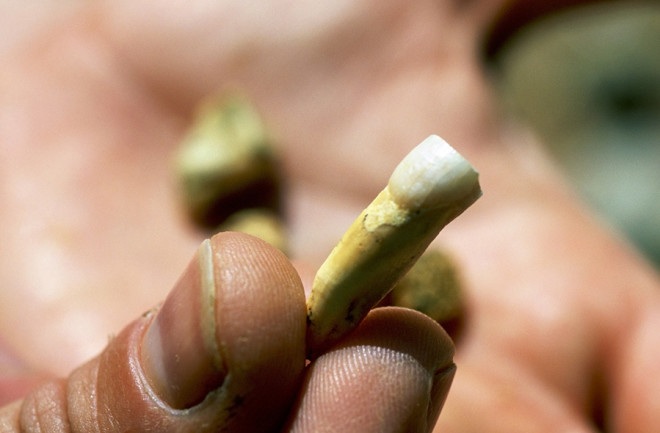 Researchers were able to extract DNA from a 430,000-year-old hominin tooth and leg bone, and then sequence the individuals’ genomes to determine their lineage. Javier Trueba/MSF/Science Source

A technological feat — extraction of human DNA from fossils nearly half a million years old — has revised the timeline for our species.

The samples came from Spain’s Sima de los Huesos cave, which has yielded the largest hominin fossil collection from the Middle Pleistocene, 130,000 to 780,000 years ago. During this murky chapter in human evolution, one branch of early Homo evolved into modern humans in Africa. A second branch spread north, later splitting into Neanderthals in Europe and Denisovans in Asia.

Based on the Sima hominins’ physical similarities and the site’s European location, some researchers assumed they were the branch that gave rise to Neanderthals. But in 2014, researchers analyzing mitochondrial DNA from one Sima sample found it was more closely related to Denisovans.

Settling this disputed ancestry required DNA from within the nucleus of a cell — something far more difficult to obtain and analyze. Researchers had never managed the feat on such ancient human DNA; even younger samples are often unreadable because they are riddled with bacteria and other contaminants. After developing new technology, a team from Germany’s Max Planck Institute salvaged 0.1 percent of the Sima genome from one femur bone and a tooth.

Our genus evolved in Africa and spread across Eurasia into different populations. Alison Mackey/Discover

It was enough DNA to be definitive: Sima hominins were Neanderthal ancestors, according to a Nature study published in March. Knowing where the 430,000-year-old Sima hominins belong in our family tree establishes a “firm point in the timeline of human evolution,” says lead author Matthias Meyer.

With enough data, geneticists can estimate when species diverged based on the number of genetic differences between them. Sima’s “firm point” allows researchers to revise the date Neanderthals and modern humans split to more than 550,000 years ago — double some previous estimates.