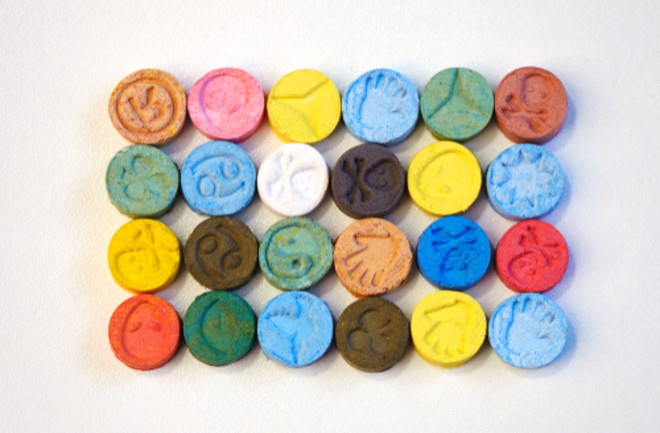 Hallucinogenic trips and addictive rushes of euphoria might be the first effects that come to mind when you think of MDMA. But the illicit party drug also has a potent effect on sociability, making users feel more connected to the people around them. And that's prompted research to study whether this MDMA benefit could help patients with PTSD, major depression and autism.

But is it possible for patients to solely reap MDMA’s social rewards? Researchers from Stanford University say they’ve identified separate brain pathways that activate addiction and social behavior. The finding suggests an altered form of the drug might one day give users a social boost without the risk of addiction.

In a study published Wednesday in Science Translational Medicine, the Stanford team looked at the effects of MDMA in mouse brains, identifying key areas where pathways lit up during MDMA use. The findings suggest that an altered form of the drug could one day give human patients the ability to treat social conditions, without dangerous side effects.

When it comes to serotonin and dopamine, MDMA packs a punch. Both hormones help regulate feelings of happiness and contentment, and MDMA sends super-loaded quantities into the brain’s reward centers. The strong flow of hormones to a part of the brain called the nucleus accumbens, which houses our brain's reward systems, is what makes the drug so addictive.

But dopamine may play a bigger role in the addictive quality of the drug, while serotonin may be driving its prosocial effects. To test this, researchers blocked the 1B receptor, a protein that carries serotonin into the brain.

“When we blocked it, MDMA completely lost its prosocial effect,” says Boris Heifets, a Stanford anesthesiologist and co-author of the paper. “So this seems like a really good candidate to say, well, maybe we can recreate MDMA’s prosocial effect and nothing else, just by hitting this one receptor.”

Sure enough, fenfluramine activated the brain's receptors with a flood of serotonin, just like MDMA. Even without dopamine, the mice still had an increase in social behavior.

So, why not just use fenfluramine in humans? Well, the drug was formerly FDA approved and used for treatment of obesity and addiction during the 1980s and ’90s — until doctors found that it causes heart problems. The daily intake of high-dose serotonin was found to be damaging in humans, and cardiovascular side effects have also been observed in recreational MDMA users.

But in clinical settings, MDMA is used in a controlled environment, and usually paired with other therapies. Heifets says MDMA as a medication would be used very differently than a typical prescription, with patients only taking the drug a handful of times alongside a therapist, as opposed to a daily pill.

Serotonin is already used to treat mental health conditions, so altering MDMA to bring out its hormone-distributing effects may not be that big of a stretch. SSRIs, or selective serotonin reuptake inhibitors, are a class of drugs used commonly for anxiety and depression. But they don’t work for everyone — especially patients with more severe conditions, like PTSD and major depression.

That's where MDMA comes in. Robert Malenka, a Stanford professor of psychiatry and a co-author of the paper, compares SSRIs to a dripping faucet, dropping small amounts of medicine into the brain over time, allowing it to build up. But MDMA hits the brain with a rush of serotonin all at once, which is sometimes the powerful zap the brain needs.

Research on MDMA for PTSD is already in late-stage clinical trials, with promising results. And a 2018 trial on patients who suffer from social anxiety due to autism also showed that the drug can help boost social stamina.

Though the researchers have yet to produce a simplified version of MDMA and test it in humans, Malenka says the team has follow-up studies planned. He is also the co-founder of a biotech company, MapLight Therapeutics, which could help streamline the process of creating an altered drug for clinical trials.

Read More: FDA Approves use of MDMA for PTSD Therapy

More From Discover
Mind
What Psilocybin Psychedelic Mushrooms Are Teaching Us About Human Consciousness
Mind
How Failing Could Actually Help us Succeed
The Sciences
How a Zombie-Ant Fungus Can Infect a Host
Mind
Video Games May Have Negative Effects on the Brain
Technology
AI and the Human Brain: How Similar Are They?
Health
There's a New FDA-Approved Drug to Treat Alzheimer’s
Recommendations From Our Store
My Science ShopDiscover STEM Kits
My Science ShopDiscover 2022 Calendar
My Science ShopStrange Science
My Science ShopElements Flashcards
Shop Now
Stay Curious
Join
Our List