When Inflammation Can Lead to Depression

Why the body's natural protective response to injury, infection and stress may have unexpected emotional consequences. 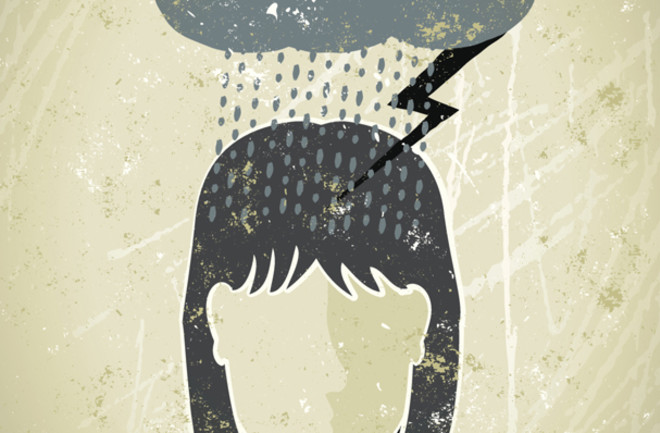 Doctors have been anxious to test anti-inflammatory drugs as a potential treatment — but there's a catch. (Credit: Meriel Jane Waissman/IStock Vectors/Getty Images)

Depression can be a devastating illness, plaguing millions of people worldwide with feelings of sadness, hopelessness, apathy and fatigue. Despite numerous antidepressant drugs, as many as a third of patients don’t respond to medication. This has forced doctors to be more creative in finding different treatments for the condition.

In the past two decades, researchers have tied depression to a seemingly unrelated condition: inflammation, the body’s natural response to stress. It could stem from injury or infection, or even emotional issues like an unhappy marriage or problems at work. Some amount of inflammation is generally beneficial, as it ramps up production of cytokines, proteins that help us heal and protect us from the effects of overexertion.

But excessive cytokine levels, and the inflammation they bring on, could come at a cost: A number of studies suggest that high levels of cytokines could contribute to depression. Some studies even indicate that anti-inflammatory drugs could reduce those cytokine levels and help people recover from depression.

As promising as anti-inflammatory drugs might seem for depression, though, actually using them as a treatment won’t be easy. Only a fraction of people with depression — an estimated 20 to 30 percent — have high inflammation (though for people with treatment-resistant depression, it’s 45 percent). No treatment guidelines yet exist to figure out who they are and how much they need. And treating depression patients who don’t have high inflammation with anti-inflammatory drugs could be detrimental.

For years, doctors believed that depression weakens the immune system, making it harder for people to fight off infections and recover from an injury. But about 20 years ago, researchers started noticing that the levels of cytokines and T-cells, which help drive immune responses and secrete cytokines, were higher instead of lower in blood samples from people diagnosed with depression.

Since then, inflammation’s connection to depression has turned out to be even stronger. When people with skin cancer or chronic hepatitis C take a type of cytokine medication called interferon-alpha to spur their bodies’ immune systems, they often start having symptoms of depression. Numerous studies have also found that healthy adults who produce above-average levels of cytokines are more likely to develop depression later in life.

Cytokines can reach the brain several ways: directly through the blood-brain barrier or indirectly by binding to nerve fibers elsewhere, which send signals to the brain to produce the inflammation molecules. In the brain, cytokines can disrupt the production and release of several important signaling chemicals, including serotonin, dopamine and glutamate, which help control emotion, appetite, sleep, learning and memory.

It’s thought that a lack of serotonin activity in the brain causes depression; most antidepressants increase the activity. But cytokines also have been shown to activate stress hormone signaling in the brain, which may also prime some to develop depression.

With all the evidence implicating inflammation in depression, doctors have been anxious to test anti-inflammatory drugs as a potential treatment. Four small studies published between 2006 and 2012 by research groups in Europe and Iran found that adults diagnosed with depression who took aspirin or another anti-inflammatory drug called Celecoxib, along with an antidepressant, got more relief from feelings of sadness, hopelessness, guilt and fatigue compared with those taking an antidepressant alone.

However, Andrew Miller, a professor of psychiatry at Emory University, thought something was amiss in these small, limited studies. None of them looked at whether the participants had to have high levels of cytokines before they’d see a benefit from anti-inflammatory drugs. “Unfortunately, much of the field has fallen into the trap of viewing inflammation as the be-all, end-all,” Miller says. He and his colleagues wanted to see whether the effect of these drugs was limited to the subset of depression patients with high cytokine levels, or if it helped all people diagnosed with depression.

Miller’s team measured inflammation levels in 60 adults with depression, but who were otherwise healthy, and divided them into two groups. One group received a potent anti-inflammatory drug called Infliximab, and the other group got a placebo. Among the participants with high inflammation, those who received Infliximab experienced a reduction in their symptoms. Good news so far.

But when Miller’s team analyzed the group with normal inflammation, they were taken aback. They naively assumed that using anti-inflammatory drugs to treat depression would take a one-size-fits-all approach. Instead, they found that the group of participants who received Infliximab were less likely to recover from depression than those who got the placebo.

“If you block inflammation in people who don’t have high levels of inflammation, you can do them a disservice,” Miller says. “What’s now becoming better appreciated is that there is a certain level of inflammatory cytokines that is probably necessary for brain function.”

The study, published in 2013, shows that the role of inflammation in mental health might be more nuanced than once thought. It also helps make sense of other research suggesting that anti-inflammatory drugs may undermine depression treatment in some individuals. One recent analysis of more than 1,500 people found that those who took an anti-inflammatory drug along with an antidepressant were less likely to overcome their depression than those who only took an antidepressant.

“For 20 years, we thought that only the higher side of the inflammatory processes in the body and brain are associated with depression,” says Raz Yirmiya, a psychobiologist at The Hebrew University of Jerusalem. Now it seems like both the high and low levels could lead to depression: Yirmiya and his colleagues have done studies in mice for the past 20 years suggesting that a specific level of cytokines is needed to ward off symptoms of depression.

As Yirmiya points out, these molecules at normal levels have many important brain functions associated with learning, forming memories and making new neurons. So, what do we make of inflammation’s double-edged nature?

While Miller’s study indicates that anti-inflammatory drugs aren’t a perfect cure for depression, it does give clues about how to use the medication effectively for specific groups. The key lies in identifying individuals with high inflammation. In Miller’s study, researchers measured levels of C-reactive protein (CRP), which our bodies make in response to high levels of cytokines. Blood tests for CRP are already a routine part of monitoring and treating inflammation-related diseases, such as heart disease and arthritis, and Miller predicts that the same will one day be true for depression.

One day, perhaps, depressed patients will come to a primary care office and have their blood drawn. If CRP is high, they will go straight to a combination of anti-inflammatory and antidepressant. “That is my vision,” says Carmine Pariante, a biological psychiatrist at King’s College London. But more studies would need to confirm Miller’s findings. For now, Pariante talks with his recovering patients about the importance of exercise and eating a balanced diet, which also can help maintain normal levels of inflammation.

Measuring inflammation levels could move physicians toward personalizing depression treatment. Until then, doctors will likely continue to treat people with depression with an antidepressant, and if the first one fails, they try another version every few months, hoping to find one that relieves symptoms. As Pariante says, “It’s about not wasting all this time if an anti-inflammatory can tackle the biological mechanism of depression.”