Recreational drug users call it "Special K." Large, frequent doses of the anesthetic ketamine can give users vivid hallucinations, but a recently published study hints that the drug may have a medicinal use: temporarily treating depression brought on by bipolar disorder. The small, proof-of-concept study appears in the journal Archives of General Psychiatry. National Institutes of Health researchers randomly gave 18 depressed patients ketamine or a placebo on two different days, two weeks apart. They used a much smaller dose of the drug than the amount used for recreation or anesthesia, but within 40 minutes 71 percent of the patients who received ketamine showed a significant improvement in mood, which lasted for three days, as measured using a psychiatric depression rating scale. The quick response time is unusual for the drugs typically used to treat bipolar disorder's depression, such as lithium or antidepressants like Prozac, and many of the study's patients had failed to respond to other treatments. On average, the study participants had tried seven antidepressants and 55 percent of participants had failed to respond positively to the extreme measures of electroconvulsive therapy (ECT)--seizures brought on by electrical current. Ketamine's apparent success may have to do with the neurotransmitter, glutamate:

Does the unconventional drug ketamine work better? The best answer is that it works differently. Many antidepressants relieve depression by altering levels of the neurotransmitter serotonin in the brain. Ketamine dissociates patients from negative thoughts and feelings by preventing another neurotransmitter, glutamate, from interacting with a receptor in the brain that usually processes it. Brain autopsies have suggested that glutamate activity is associated with bipolar disorder, and past studies have shown that severing the glutamate-receptor link can rapidly lift symptoms in people with major depression within two hours. [Time]

Though ketamine's therapeutic effects were only temporary, scientists hope that with more research they may be able to incorporate the drug into treatments.

Ketamine could improve treatment of bipolar illness and depression in a variety of ways, [coauthor Carlos A.]

Zarate said; for example, as a means to jump-start standard drug treatment, or as an anesthetic before ECT. "It's opened the floodgate of many different directions of research, and all of them are quite encouraging," said Zarate, who along with a co-author has filed for a patent on the use of ketamine in depression. Those rights would be assigned to his employer, the National Institutes of Health. [Reuters] 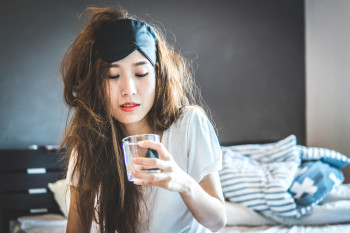 Why Don't Some People Seem to Get Hangovers?

The SciencesShame and the Rise of the Social Media Outrage Machine