Show them the money: The winners of the Kavli Prizes have been announced, and the eight scientists will split a total of $3 million in prize money. No, these aren't the Nobels. The Kavlis are a relatively new award created to award scientists whose fields don't get much recognition in Stockholm:

These are only the second ever recipients of Kavli Prizes, the biennial awards launched in 2008 by Fred Kavli. Recipients in the fields of astrophysics, neuroscience and nanoscience each receive a scroll, a gold medal and (perhaps most importantly) a share of the $1 million pot for each discipline [Nature]. 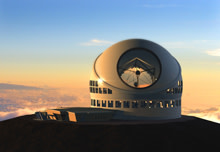 The prize recognized three men—Jerry Nelson, Roger Angel, and Raymond Wilson—not for finding new phenomena deep in the cosmos, but for engineering the telescopes to make those searches possible. Nelson and Angel are renowned for their prowess in casting the mirrors for the largest telescopes on Earth; Nelson's work will go into the Thirty Meter Telescope

, for which Mauna Kea in Hawaii was just chosen as the preferred location.

Dr. Wilson pioneered the use of a technology known as active optics, in which computer-controlled supports correct the shapes of telescope mirrors to cancel the distortions caused by gravity, wind and temperature, allowing astronomers to build mirrors that are thinner and lighter [The New York Times]. 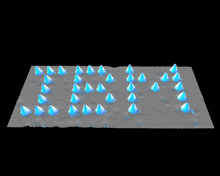 Nadrian Seeman of New York University and Donald Eigler of IBM shared the recognition for nanotech.

Seeman discovered that DNA — the genetic material of living creatures — could be used to construct an assortment of molecule-sized devices and machines. In a recent study published in the science journal "Nature," Seeman and others showed how they built from DNA a functioning assembly line of molecular robots [AP].

Eigler, more than two decades ago, became the first person to accurately move atoms from place to place. Famously, he used 35 xenon atoms to spell out "IBM"—perhaps nanotechnology's version of a marching band spelling out its college's name on the football field. 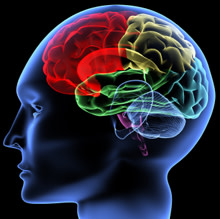 This prize went for communication across the brain, and Thomas Suedhof, Richard Scheller, and James Rothman shared the accolades. Rothman, of Yale, investigated the vesicles in the brain that move neurotransmitters between cells. Suedhof and Scheller discovered much of the genetics that underlie these structures.

"These three people took the study of communication between synapses and brought it from a physiological to molecular level," neuroscientist Eric Kandel of Columbia University and member of the Kavli committee [San Jose Mercury News].

Related Content: Discoblog: Fields of Research Dissed By Nobel Finally Get Their Limelight

, on the first Kavlis DISCOVER: 20 Things You Didn't Know About... The Nobel Prizes

Not Exactly Rocket Science: Enter the Nano-Spiders: Independent Walking Robots Made of DNA