World's Biggest Telescope Will Provide "Baby Pictures" of the Universe 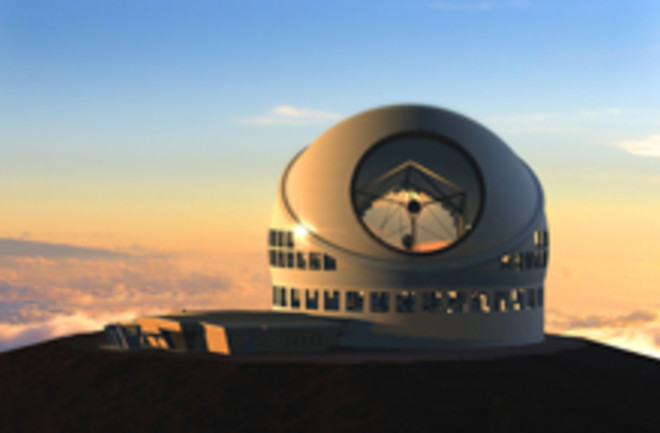 The dormant Hawaiian volcano Mauna Kea has been selected as the site of the world's largest telescope, the much-anticipated Thirty Meter Telescope. Its enormous mirror will have nine times the light-gathering capacity as the biggest telescopes operating today, and will be able to look back to the beginnings of the universe.

will be so large that it should be able to gather light that will have spent 13 billion years traveling to earth. This means astronomers looking into the telescope will be able to see images of the first stars and galaxies forming — some 400 million years after the Big Bang [AP]

. The telescope is expected to be completed by 2018, but it may not be the world's largest for long--the European Extremely Large Telescope is scheduled for completion around the same time, and will boast a 138-foot mirror. The volcano on Hawaii's Big Island was chosen over the other finalist candidate, a mountaintop in Chile,

, says Edward Stone, vice chairman of the TMT board. The telescope's directors said in a press release that it

will also be the first telescope ever with “adaptive optics” built in from the beginning, a technique that senses corrects for atmospheric turbulence, giving the telescope “spatial resolution more than 12 times sharper than what is achieved by the Hubble Space Telescope” [Nature blog].

The Thirty Meter Telescope will be the 14th observatory on Mauna Kea. The 13,800-foot-high peak is a marvelous site for astronomy, as it's above the clouds and fairly isolated from air and light pollution, but it also brings some complications.

Mauna Kea is considered sacred to Native Hawaiians, while environmentalists have raised concerns about how the project will affect rare native plant and insect species atop the volcano. That opposition could affect work on the new telescope, especially if those against the project decide to head to court [Honolulu Advertiser].