Fields of Research Dissed by Nobel Finally Get Their Limelight 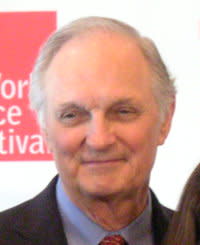 This is a guest post by Discoblog correspondent Darlene Cavalier.

. The Kavli Prizes are given to researchers for outstanding scientific research in astrophysics, nanoscience, and neuroscience.

Actor and science advocate Alan Alda took the stage and, with the aid of broadcast satellites, introduced representatives of the Kavli Foundation "live" from their hometown of Oslo, Norway.

The astrophysics prize went to Caltech's Maarten Schmidt and Donald Lynden-Bell of Cambridge University for their breakthroughs in quasar research. Schmidt measured the light spectra of quasars and was able to determine our distance from galaxies, while Lynden-Bell demonstrated how quasars were powered by the collapse of material into massive black holes.

The nanoscience prize went to Louis E. Brus of Columbia University and Sumio Iijima of Meijo University in Japan for their discoveries of quantum dots and carbon nanotubes. Their work helped scientists better understand the properties of particles so small that electron motion is confined to zero or one dimension. Fields as diverse as electronics, the environment, energy and bio-medicine are benefiting from their discovery.

The neuroscience prize was shared by Pasko Rakic of the Yale, Thomas Jessell of Columbia U., and Sten Grillner of the Karolinska Institute in Sweden, for discovering how the network of cells in the brain and spinal cord are ruled. Rakic explained how an embryo's neurons march into position to develop into the complex circuit system of the adult cerebral cortex. Jessell revealed the role of chemical signals on neurons. And Grillner showed how, at a molecular level, neural circuits in spinal cords generate motor commands.

Fred Kavli, the entrepreneur and philanthropist who founded and funded the Kavli Prize, was in attendance at the ceremony. "Through these prizes, we hope to honor, support and bring recognition to scientists...whose work has profoundly advanced the frontiers of our knowledge, " Kavli said in a speech. "We aim to raise peoples awareness of the benefits of fundamental science to their own, everyday lives."