Why Don't Some People Seem to Get Hangovers?

There's no such thing as being "immune" to hangovers. But your genes, your beverage choice, and how much you drink all contribute to your morning-after misery. 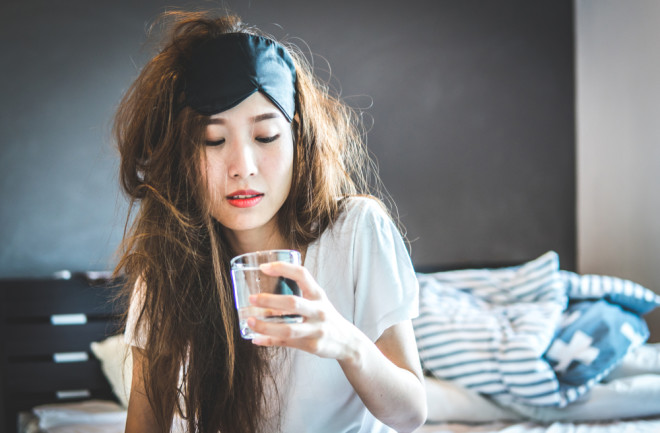 If there were any proof for the phrase, “There’s no such thing as a free lunch,” it would be the hangover. Germans experience the katzenjammer (screeching cats) and the Irish the “brown-bottle flu," while the Vietnamese must tồn tại (endure). Before English speakers spoke of hangovers, they used the wonderfully descriptive term crapulous, as in “I’m feeling so crapulous, I can’t risk talking.”

Whichever language you speak, we can agree that hangovers are awful. Studies define them as “characterized by a general feeling of misery” and “an aversive constellation of symptoms.” But, believe it or not, some people report not suffering hangovers at all: Studies have found that around 20 to 30 percent of people claim they can avoid post-drinking anguish.

Is it true that nearly a third of people don’t experience hangovers? To assess these somewhat dubious claims, it’s important to consider the range of (awful) symptoms and what incites them.

Unpleasant Hangover Symptoms and Their Causes

To fill the systemic katzenjammer research gap, psychologist Wendy Slutske developed the Hangover Symptoms Scale in 2003. It runs from “most commonly experienced” to “least commonly experienced” symptoms — and reads like a diary entry from a Sunday morning, with phrases like, “Felt extremely thirsty or dehydrated,” “Felt very nauseous” and “Experienced trembling.” Respondents also reported emotional reactions like apathy, regret, confusion and guilt.

While there’s plenty of research surrounding alcohol’s effects, there are few studies about hangovers, which means the causes remain somewhat of a mystery. Below are the possible culprits, ordered from least to most guilty.

While dehydration is commonly blamed for hangovers, it’s only part of the story. It’s true that alcohol is a diuretic, or a chemical that causes us to relentlessly pee, but dehydration could simply "co-occur" with hangovers rather than drive them. Dehydration explains our thirst and parched mouth, but none of the other symptoms. Related offenders like low blood sugar levels and an upset salt-balance similarly lack a connection to hangover severity. They’re probably just along for the ride, and consuming a hearty breakfast and an electrolyte-rich drink should stave off these nasties.

Unless you’re a boutique booze purveyor or highfalutin sommelier, you probably haven’t heard of congeners. Consider these chemicals the personality traits that give each alcohol its own special qualities: whiskey’s smoky aroma, red wine’s boysenberry hue, tequila's quaint toxicity. Often, the darker the color, the more the congeners — and the more toxic its constituents. While the toxicity of congeners might not cause hangovers, it does seem to exacerbate them, so you can try sticking with clear drinks like vodka, gin and light beer.

The body transforms booze into a substance called acetaldehyde, which is up to 30 times more toxic than alcohol and causes nausea, sweating and a racing pulse. Does this sound familiar? Acetaldehyde, along with its broken-down form, acetate, may be responsible for the lion’s share of hangover symptoms.

Researchers have recently taken a closer look at the role of the immune system in provoking those crapulous mornings. Drinking alcohol invites a broader suite of chemicals into our bloodstream than usual, triggering an immune response: Inflammation-promoting proteins signal the brain to produce more of them, leading to throbbing headaches and psychological effects like memory issues and mood changes (sometimes called the metaphysical hangover).

A 2008 study published in Current Drug Abuse Reviews evaluated all the research claiming to have quantified the elusive “hangover-resistant” population, and concluded that they constitute roughly 23 percent of the US population. But how can so many people avoid the next-day symptoms?

As it turns out, genetics explains almost half the variation in hangovers experienced between individuals — though the potential explanations (which genes are doing what) are countless. For example, many people of Chinese, Japanese and Korean descent have a mutation that prevents their bodies from effectively breaking alcohol down, leading to accumulated acetaldehyde, alcohol flushes and worse hangovers — but with lower chance of alcohol-use disorder (alcoholism).

As for whether young people can better endure them, Richard Stephens from the Alcohol Hangover Research Group told the BBC that “there’s no evidence" for the claim that hangovers worsen as we age. In fact, he found that they’re around seven times more likely for 20-year-olds than 60-year-olds, though this is likely related to binge intensity.

Despite the hard evidence regarding genetics and age, our hangover perceptions may not always match reality. A 2015 study published in Alcohol and Alcoholism separated people who claimed to be hangover-resistant from people who experience more typical hangovers, got them equally drunk and measured their immune responses before and after drinking. The morning after, both groups had significant immune responses, with no discernible differences between them.

What’s more, much of our hangover data come from surveys that rely on participants self-reporting their symptoms. Not only is this unreliable, but researchers don't often account for drinking circumstances: Over how long a period were these drinks consumed? Was there a judicious “padding of the stomach” beforehand?

Overall, it’s hard to discern whether people who claim to be hangover-resistant are the real thing. The difference may lie in our different definitions of intoxication and the intensity of our alcohol guzzling.