What science says about how much, if any, alcohol is OK for your health. 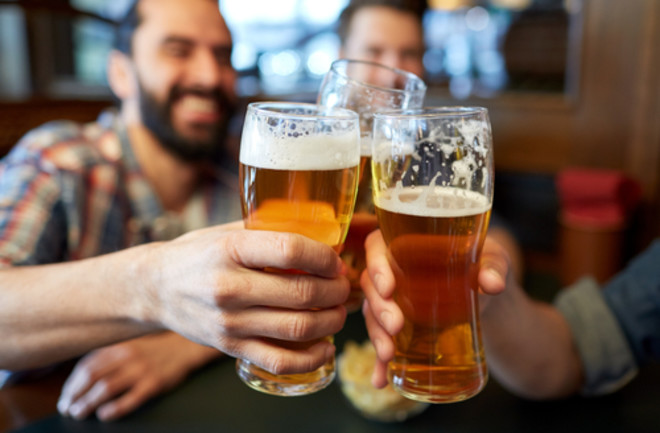 If you’re anything like me, you’ve often wondered: How bad are a few beers for me, really?

I mean, archeologists have proof that humans were boozin’ more than 9,000 years ago — maybe even earlier — and there’s been some sort of alcohol use in nearly every society throughout history. For most of those millennia, there was no reason to feel guilty about imbibing, as long as you did it moderately and responsibly. That’s like, in the Bible.

Fast forward a few thousand years, and some studies have shown alcohol can be good for heart health. For longevity. You might have heard that a glass of wine a day can keep the doctor away. And yes, if you’re wondering, there are actual, legit studies that link things like the resveratrol and antioxidants in red wine to good health.

Wait! But hold on. In 2018, a bunch of scientists reviewed 700 different studies from around the world, and were like, hey, actually, no amount of alcohol consumption is healthy. Yikes.

A big reason for that is that there’s more and more evidence that shows alcohol is linked to cancer. And it’s looking like that evidence outweighs any of those potential heart health benefits. Whomp whomp.

Alcohol is classified as a Group 1 carcinogen. That’s the same ranking given to tobacco and radiation from the sun. Now, that doesn’t mean drinking is as bad for you as smoking. That “Group 1” thing just refers to how strong the evidence is that shows exposure can cause cancer. It’s like how not every smoker will get cancer, but researchers are really sure that that link is there.

So, turns out drinking alcohol is the third-best way to give yourself a fatal cancer, right up there after cigarette smoking and excess body weight. To put it in more technical terms, alcohol use is third on the list of avoidable risk factors associated with deadly cancers in the United States. Around 3.5 percent of all cancer deaths in a given year are alcohol-related.

Now, 3.5 percent doesn’t sound like much when you compare it to the 30 percent of cancer deaths that are from cigarettes — but that 3.5 percent still comes out to something like 19,500 deaths every year. Apparently, cancer kills a lot of people.

If these numbers aren’t doing anything for you, we also can think of booze in terms of cigarette units. Drinking one bottle of wine has the same carcinogenic impact as smoking five cigarettes for men and 10 cigarettes for women.

I don’t know about you, but I haven’t had 10 cigarettes in my life. But the last time I had a bottle of wine was yesterday.

By the way, if you’re wondering, those gender differences aren’t because of tolerance or body size. It’s because women have more breasts. So if a busty person has 10 drinks a week — which is considered moderate drinking — it’s specifically their risk of breast cancer that goes up. More so than the other cancers.

But even those without breasts should be mindful of how much they drink. If 1,000 men and 1,000 women each drank a bottle of wine every week, around 10 of those men and 14 of the women would develop cancer as a result. And there’s a bunch of different cancers that are tied to alcohol. Breast, colon, rectum, liver, oral, esophageal — did I forget any?

And the reason for this isn’t the alcohol itself. It’s because when your body processes alcohol, it turns it into a compound called acetaldehyde. Which is highly toxic, and a known carcinogen. Thanks a lot, liver.

I mean, it is a cancer. I’m literally telling you how cancer works.

But that DNA damage isn’t the only way that alcohol can cause cancer. For one, drinking can elevate estrogen, a hormone linked to breast cancer.

But all that said, the effects of drinking alcohol are not one-size-fits-all. Some heavy drinkers will never develop cancer; some light drinkers might. That difference is likely tied to our genes that determine how our bodies break down alcohol.

News You Can Use?

But if all this research is news to you, you’re not alone. Sixty percent of Americans say they don’t know about alcohol’s cancer risk. But awareness of this might not actually change anyone’s behavior. Surveys say — and this goes especially for women — that it’s the negative impact on weight, and relationships, that are more likely to make a person abstain.

But I don’t want to be a total buzzkill. So if you’re not quite ready to be a teetotaler, here’s one last tidbit for you.

Researchers recently looked at the health records of more than 400,000 people, zeroing in on how light and moderate drinking impacted mortality. They found that there is a safe amount of alcohol to drink per week, at least for most people. You might want to write this down. Are you ready?

If you have one to two drinks, a few times a week, it’s still not good for you, but it’s probably not that harmful, either.

Remember, the next time you want to unwind with some wine, or cheers with some beers, that moderation is key. Don’t let that acetaldehyde ruin your next party.

This video is based on reporting by Discover staff writer Megan Schmidt: "Can One Beer a Day Increase Your Cancer Risk?"