Shivering does burn fat, but it probably won't lead to sustained weight loss. 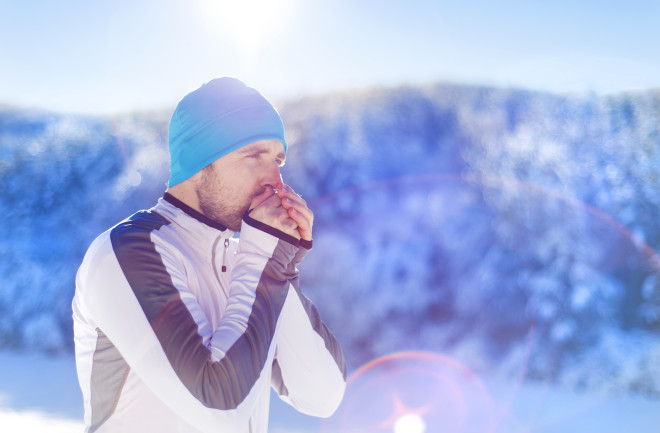 Exercise and shivering trigger same the same fat-burning hormone. But, don't give up jogging just yet. (Credit: Shutterstock)

When we're cold, we shiver. The involuntary vibrations help us generate body heat so that we don't freeze. And all that motion also has a secondary benefit for modern humans — it burns calories, and potentially fat. Can we really shiver our way to better health?

It almost sounds like a pitch from an informercial, but it's true: one study from 2014 found that just 15 minutes of shivering might provide similar fat-burning benefits as a full hour of moderate exercise. Our instinctive response to the cold helps stimulate a key hormone called irisin that helps the body produce a specific type of fat conducive to weight loss.

But if you’re considering swapping your next workout for an ice bath, think again. Simply being cold doesn't translate to sustained weight loss. Furthermore, while a shiver-induced hormone boost does appear to produce some of the same benefits as a workout, it won’t leave the same long-lasting effects on our metabolism as regular trips to the gym.

Dubbed the "exercise hormone" because our bodies seem to release it in response to physical activity, irisin helps turn white fat into brown fat in our bodies. That matters because brown fat is easily turned into energy by the body's mitochondria stores, meaning it's easier to burn off. And sure enough, irisin is present in our bodies when we shiver, just like when we exercise, meaning that unpleasant shaking sensation can indeed help us burn fat.

In a Cell Metabolism study from 2014, 10 volunteers dressed in hospital scrubs and laid under water-cooled blankets used to adjust their body temperature. They started at 27 degrees Celsius (80.6 Fahrenheit) and researchers slowly brought the temperature down to 12 degrees (53.6), causing the participants to shiver. More intense shivering correlated with higher levels of irisin production. When compared to another group of test subjects cycling on stationary bikes, the researchers found shivering for just 15 minutes resulted in irisin levels comparable to those seen after 60 minutes of moderate exercise.

Of course, the simple act of shivering itself burns some calories, too, though it's unclear if it's enough to make much of a difference. Irisin production, by contrast, specifically targets fat stores. But temporarily boosting irisin levels likely isn't the key to sustained weight loss.

In a Metabolism study from 2014, researchers wanted to know if, by mimicking shivering in the body, they could also make irisin levels rise. So, they had a small group of women participate in six weeks of whole-body vibration exercise, where participants balance on a vibrating plate. It worked — levels of the hormone increased. But, it didn't have a lasting effect on the participants' baseline irisin levels, even after the training was over.

So whatever fat-burning benefits arose during their workout disappeared once participants rested again. And one study suggests other types of exercise won't help give you an irisin boost, either.

In a 2014 report from Medicine and Science in Sports and Exercise, researchers took a group of sedentary adults and had them do resistance training for six months, measuring their irisin levels before and after the training started. At the end of the trial, people who went through six months of training did not have higher baseline irisin levels than the controls.

So, you're pretty much stuck with whatever irisin your body is able to produce during physical activity. And exercise itself may not have that big of an impact on weight loss, since hitting the gym doesn't burn that many calories relative to other things. It might help to adjust other parts of your lifestyle, such as diet, if you're really looking to shed pounds.

As for shivering — we know it can boost the body's fat-burning capabilities and keep us warm in the winter months. But research is unclear as to how much, if at all, shivering can lead to healthy, sustainable weight loss.