Whole Body Vibration: Does Shaking Up Our Workouts Lead to Better Health? 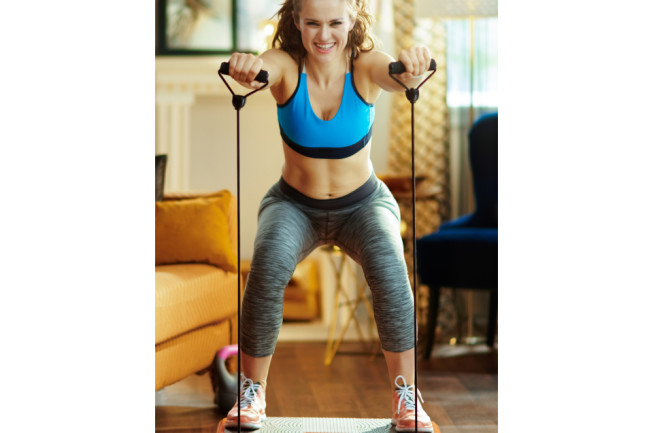 Does working out on a vibrating plate help make us stronger? (Credit: Alliance Images)

Can we vibrate ourselves healthy? That’s the premise behind a form of therapy called whole body vibration, or WBV. Proponents argue that subjecting our bones and muscles to rapid vibrations makes them stronger — much the same way exercise does.

The idea is simple: Standing on a vibrating plate forces our muscles to do work. This low-grade stress ultimately leads to strength gains and weight loss. Some studies have even gone further, claiming WBV can reduce blood pressure or combat diabetes. If so, it could be an easy path to better health. But, despite years of research and hundreds of studies, the true benefits of WBV are still unclear.

Can Vibration Make You Stronger?

You can buy a vibration plate on Amazon for less than $100. The idea is that you stand on the machine (bonus points if it’s during a workout), allowing the vibrations to add extra strain to your muscles. A number of studies have subjected people to this simple setup, examining whether the shaking has measurable effects on our bodies.

One study found that women who did leg exercises on a vibrating platform for 12 weeks could jump higher compared to a control group. The results were only slightly better than for a group that performed a normal exercise routine for the same amount of time, though. Another study saw an increase in vertical jump height after researchers had participants simply stand on a vibrating plate several times a week for eight months.

It could be that WBV is simply forcing our muscles to compensate for extra stress, making them work harder and get stronger. But some scientists have proposed that the vibrations, when administered at the correct frequency, are actually reaching into the control systems of our muscles, forcing them to activate.

Indeed, some studies have found that people’s muscles get fatigued after being vibrated, and their oxygen uptake increases. It could be a sign that WBV is causing our muscles to work harder.

But other studies have come to less inspiring conclusions. A 2004 study concluded that, while doing light exercises on a WBV platform did make people stronger, the gains were about comparable to just working out regularly. Another research group looked at people standing, but not working out, on a vibrating plate for 11 weeks and found no effects on knee strength.

And even in studies that have found positive effects from whole body vibration, the increases in muscle strength are small, and most likely to be seen in people who don’t train regularly. A fitness panacea, or “one small trick” for a beach body, this is not.

Then again, the research hasn’t noted any downsides to whole body vibration, either — unless you’re pregnant; if so, you should abstain. If you feel like your workout needs a little tremor, go right ahead.

Even if you don’t want to shake up your exercise regimen, whole body vibration could offer important benefits to people unable to perform normal workouts. This includes the elderly and infirm, and people with muscle and nerve diseases. One study of 40 people with cerebral palsy found that the participants could both walk and stand up better after 20 weeks of WBV.

Another study found that whole body vibration fatigued elderly people’s muscles more than it did younger people’s, an indication that it might offer greater benefits to seniors. One group has also found some indications that WBV could help with cardiovascular health, and others have shown it could help fight osteoporosis.

After more than two decades of study, much research today in WBV focuses on clinical applications aimed at people who might have difficulty exercising. The results are encouraging, says Silmara Gusso, a senior lecturer in the department of exercise sciences at the University of Auckland in New Zealand. However, she cautions that more research is needed to fully understand the benefits of WBV and who it will help the most.

And, Gusso says, not every kind of vibration is helpful to our bodies. WBV seems to stimulate muscles only when delivered at certain frequencies. Some studies have indicated the best results come from vibrations that match the resonant frequencies of our muscles and tendons.

For this reason, the commercially available vibration plates may not work as advertised, she says.

“There are different types of plates with different vibration stimuli which will produce different muscle outcomes,” she says. “Therefore, we cannot imply that the results obtained with certain equipment can be transferred to others. Some types of vibration might even cause harm.”

So, the news here is mixed. As with most fitness fads, WBV isn’t going to hack your workout. But for those who actually need an alternative to exercise, vibrations might offer a path to better health.