Exercise Has Many Health Benefits. Weight Loss Isn't Really One of Them

It's harder than you might think to lose weight through exercise alone. 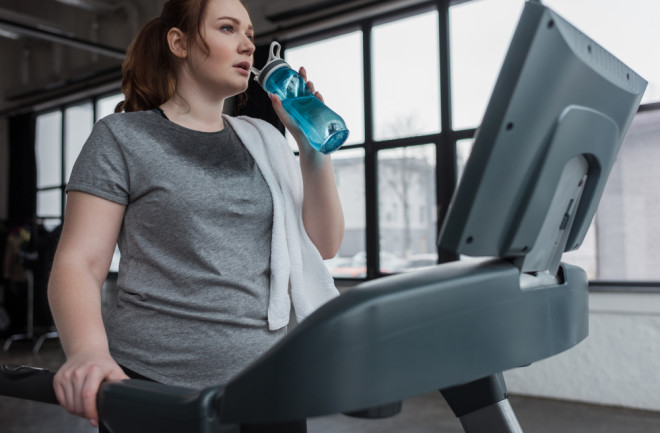 Exercising but not losing weight? It might be because of what's on your plate. (Credit: LightField Studios/Shutterstock)

You’ve been working your butt off for weeks at the gym. You’ve got the sweat and sore muscles to prove it. But, for some reason, the scale hasn’t budged. Or worse, the number you see on the dial has been creeping up.

If weight loss, at its most basic level, is a matter of calories in and calories out, it's reasonable to assume it's possible to burn off those extra calories in the gym — and lose weight — without making any diet modifications. But science has begun to show that we might want to examine this mindset a bit more skeptically.

While you may not want to cancel your gym membership just yet, the inescapable truth of weight loss is that exercise doesn't compensate for a poor diet.

Regular exercise can prevent or help manage a slew of health issues — from cancer to heart disease to Alzheimer’s and arthritis. But losing a lot of weight isn't chief among exercise's many benefits.

Instead, focusing on the first part of the “calories in, calories out" equation may be the most effective approach to slimming down.

“Typically, people are able to lose much more from caloric restriction than from exercise simply because the caloric expenditure with your typical exercise regime — 30 minutes most days of the week — doesn’t translate to very much weight loss,” says Jennifer Kuk, a kinesiologist at York University in Toronto, over email.

Losing a pound a week requires a calorie deficit of 3,500 calories, or 500 calories per day. You can accomplish this through diet, exercise or a combination of both approaches. But it seems that diet and exercise aren't equally effective.

"The reason dieting may be more effective than just exercise is because exercising would take a ton more activity and effort to create a 500- to 700-calorie deficit,” says Yasi Ansari, a registered dietitian and spokesperson for the Academy of Nutrition and Dietetics, in an email.

To put this in perspective, a 155-pound person would burn roughly 500 calories from an hour of high-impact aerobics or by walking for 90 minutes at a rate of 4.5 mph.

So, in other words, don't expect much from those quick trips to the gym. Someone who started exercising 30 minutes almost every day would probably lose about a pound over the course of a month, Kuk says. For most people trying to lose weight, that would be downright disappointing. (It’s no wonder that half of all new gym customers drop off by the end of January.)

Can Exercise Make You Gain Weight?

What’s worse than experiencing little or no weight loss while exercising? Gaining weight. That's right: Sometimes an exercise program can cause the opposite of its intended effect.

One study from a team of Arizona State University researchers tracked 81 sedentary, overweight women over a 12-week exercise program that consisted of 30 minutes of brisk treadmill walking three times per week. Surprisingly, most of the women didn’t lose pounds by becoming more active — and more than half of them gained weight.

Another study from researchers at Louisiana State University followed 200 overweight men and women enrolled in a supervised aerobic exercise program over the course of six months. The study found that the participants ended up compensating for the calories lost to working out by eating more. As a result, many participants didn't lose weight, or they gained it.

“Some people will find that they are hungrier with exercise and that their body will try to protect themselves against weight loss by increasing hunger, and they lose less weight than expected,” Kuk says. “This is more commonly reported in women.”

Is Working Out a Waste of Time?

It is technically possible to lose weight simply by working out — albeit with caveats.

Some studies have demonstrated that exercise alone can create a calorie deficit that’s large enough to generate weight loss. But for the average person, the required intensity and time commitment — about an hour every day — can be difficult to stick to.

“Most [people] will have problems exercising one hour per day at a moderate intensity every day to equal the weight loss you would get from your typical diet,” Kuk says.

Most health professionals recommend implementing both approaches — calorie control and exercise — when losing weight. And this is probably pretty sound advice.

But where exercise might be more helpful is keeping weight off once we've lost it. A recent study from the University of Colorado Anschutz Health and Wellness Center revealed that exercise plays a greater role than diet in sustaining substantial weight loss.

The Unsung Benefits of Exercise

No matter your weight or fitness goals, remember that the health benefits of a balanced diet and exercise regime go far beyond a number on the scale.

“Eating better and exercise can improve your health even if you don’t lose a single pound,” Kuk says.

A 2011 study found that adopting a healthy diet and moderate exercise can reduce obese people's risk of cardiovascular disease and diabetes, regardless of whether they lost weight or not.

And, it's a controversial idea, but some researchers think you can be "fat but fit." In other words, your fitness ability, regardless of weight, might play a major role in overall health.

So, if you find yourself frustrated the next time you step on the scale, Kuk recommends asking yourself why you're trying to lose weight in the first place.

“Many try to lose weight because of the clear bias and stigma in our society … I believe that for most people who are trying to lose weight, society is the problem, not the individual. This is not to say that we should not try to eat well or exercise regularly … but this is a message for all of us, not just those with weight obesity,” Kuk says.

More From Discover
Health
Why Do Some People Live So Long?
Health
Does Turkey Really Make You Tired?
Health
6 Brain Boosting Foods You Should Have on Your Plate
Health
Why Our Inner Clocks May Benefit from Stressed-Out Plants
The Sciences
The Secret Science Behind Alcohol-Removed Wine
Health
5 Interesting Facts About Thyroid Disease and Treatment
Recommendations From Our Store
My Science ShopDiscover STEM Kits
My Science ShopDiscover 2022 Calendar
My Science ShopStrange Science
My Science ShopElements Flashcards
Shop Now
Stay Curious
Join
Our List