Sweet like sugar, but without the calories — a promise that might be too good to be true. 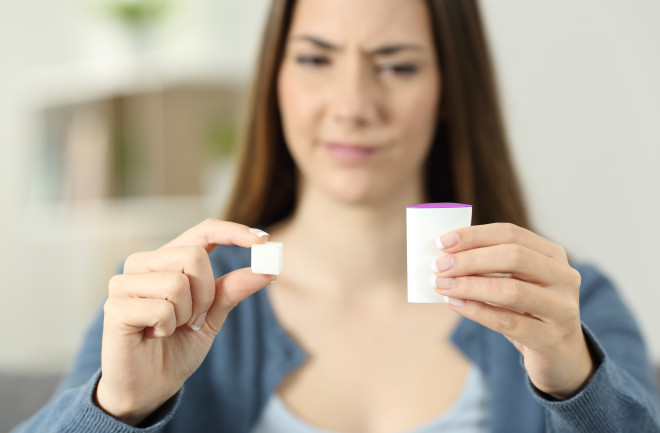 If it's called diet soda, it will probably help you lose weight, right? Well, science isn't so sure about that.

It's true that sugar is calorie-dense and can spike blood sugar, which is why consuming high amounts of it is associated with weight gain, diabetes and heart problems. Artificial sweeteners, on the other hand, offer a calorie-free alternative that might seem like a magic solution, and could help explain why over 40 percent of adult Americans consume them on a daily basis. No extra calories means no weight gain, right?

But that logic isn't so simple. It’s possible that our taste receptors may be tricked into sending signals to the brain that say we want more sugar, driving us back to the very thing we're trying to avoid. And scientists still aren't clear on what the long-term health effects of artificial sweeteners are — but preliminary results show that they could alter metabolic functions and the microbiome.

Artificial sweeteners can be hundreds and thousands of times sweeter than table sugar, which is why just a small packet of Splenda still packs a punch. There are currently six types of artificial sugars approved for use by the FDA, ranging from lab-made substances like aspartame and sucralose to plant derivatives like stevia.

But each of those alternatives behaves in our bodies in the same way normal sugar does. In 2001, a team of biochemists discovered that all molecules imparting sweetness, regardless of their chemical makeup, bind to a single receptor in the body. Artificial sweeteners bind more tightly to these receptors, creating the perception that they're just as sweet — or sweeter — than sugar itself.

Because artificial sweeteners have no calories and don't cause a blood sugar spike, they're often used as a sugar substitute for diabetics. But replacing sugar with substitutes might not be a clear solution if you're trying to lose weight. Dozens of studies over the years have observed a correlation between obesity and artificial sweetener use, but have yet to draw a clear link between the two.

Meghan Azad, a professor of pediatrics at the University of Manitoba, says there are some hypotheses as to why weight gain and artificial sweetener use seem to go together. Because of how the body is programmed to respond to sugar, our metabolic systems get confused when the sweet taste appears but there aren't any calories to digest. Over time, the illusion might reprogram metabolic systems to become resistant to insulin or develop a glucose intolerance.

Read More: Closing In On a Non-sugar Sweetener — One Without a Weird Aftertaste

“Even if the sweeteners themselves are not found to have a direct chemical harm in your body, it still gives you this tendency toward having sweet things," Azad says. "Overall, if we all just had less of a sweet tooth that would probably be a good thing.”

A Question of Excess

Our understanding of exactly what artificial sweeteners do to the body is slim, even though aspartame is the most widely studied substance in FDA history. While many studies focus on the effects of artificial sweeteners on weight loss, there is still much to be uncovered about how they affect people over time, even when those people are not overweight.

In 2017, Azad conducted a meta-analysis of 37 studies to examine what kinds of effects artificial sweeteners had on routine consumers over time. Her research found that artificial sweeteners had no impact on participants' body mass index in clinical studies, but studies over several decades showed that consumption of more sweeteners correlated with higher incidences of obesity, hypertension and metabolic syndrome.

But Azad says the studies her team analyzed had their limitations. Many of the clinical trials were short-term, averaging about six months, and did not track effects on cardiovascular health. Plus, the observational studies relied on self-reports and didn't always ask the most specific questions about artificial sweetener use, but rather diet in general.

And while the long-term studies helped researchers analyze some of the potential long-term effects of artificial sweetener consumption, they couldn't always get the full picture. Plant-based sweeteners, like stevia, weren't as popular at the time some of these studies began — leaving the question of whether plant-based alternatives are safe for use over a long period of time.

In general, Azad says, short-term use of sugar substitutes is still relatively safe. But until researchers can conclude what happens over periods of long-term, regular use — say, two or three decades of using substitutes at least once a day — the question of how they affect our bodies remains open-ended.

Azad's study concluded that there was not enough evidence to show that artificial sweeteners have long-term benefits. They might, however, be linked to higher BMI and heart problems.

But she cautions that the lack of evidence linking artificial sweeteners to sustained effects means that more research is needed to understand exactly how these substitutes work in the body. And the way artificial sweeteners affect our metabolism and microbiome over time is still an important case to crack, she says.

“We find a lot of correlation, but until we know, really, what’s going on at the mechanistic level inside our bodies, it’s hard to understand what the recommendation should be,” Azad says.

Nonetheless, since artificial sweeteners have been through the ringer with FDA approval testing, they generally won't be harmful to consume. But over time, scientists still aren't sure what effects regular consumption of artificial sweeteners could have. They might require the same wisdom as sugar — good in moderation, but not in excess.

[Editor’s Note: This article has been updated to accurately reflect Meghan Azad’s title.]