Bill Clinton Got 2 Stents. What's a Stent? Are They Overused? 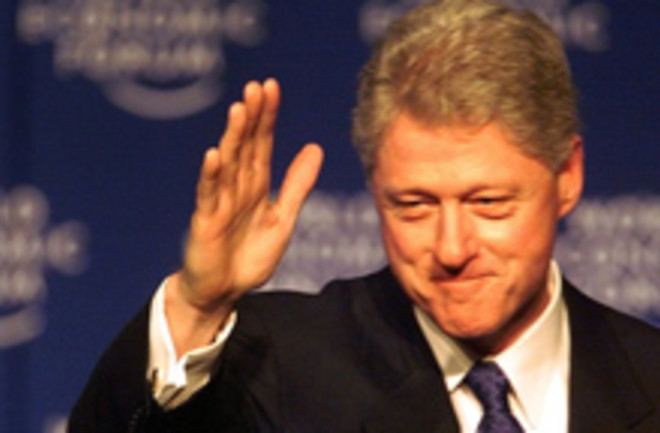 Former President Bill Clinton is out of the hospital today after seeing a doctor in New York about chest pains this week. Clinton

showed no evidence of a heart attack and his prognosis is excellent after a procedure Thursday to insert two stents in a coronary artery that had become blocked, said his cardiologist Dr. Alan Schwartz [Los Angeles Times]

. Clinton's rush to the hospital brought new attention to the common medical practice of using stents in heart patients.

A stent is a small wire mesh tube that is inserted into an artery in order to prop it open, like a miniature scaffold. Surgeons use stents to improve blood flow to the heart muscle and relieve symptoms such as the chest pain that Clinton experienced [ABC News]

. Most people who undergo coronary angioplasty procedures receive stents. Once the tube is in the artery, the artery grows over it and it becomes a permanent part. Of course, no body part of President Clinton can enter the news cycle without it becoming politicized. Some conservatives took the opportunity to argue that the procedure he received would be harder to get under the kind of changes to the health care system he tried to achieve in 1994, and that the Democrats are working towards again at the moment. But it may be that fewer people should be getting stents.

For people with first-time chest pain for the first, a major study found doctors implant stents too often and that patients fared no better, when it came to heart attacks and death, than when they didn't have the procedure [NPR]

. There's also a risk of scar tissue and clotting, which is why patients often receive stents coated with a drug designed to prevent arteries from closing back up, and often must take blood thinners for a while after the operation. As for the former President, his docs say he's in pretty good shape. Heart disease doesn't get cured or just go away, but Clinton has reportedly mended his former fast food- and doughnut-eating ways. Cardiologists Jon Resar noted that Clinton's current troubles could be related to the bypass surgeries he's had in the past.

"What may have happened is one of the bypass grafts developed a blockage or became totally occluded [blocked] or a new blockage developed beyond where the the original bypass was inserted into the artery," he said [ABC News]

More From Discover
Health
What is Long COVID and What are the Symptoms?
Health
The Surprising History of the Bidet Started with the Wealthy and Brothels
Mind
What Is Dissociative Identity Disorder?
Health
Forget A "Twindemic," Experts Anticipate A "Tripledemic" This Winter
Health
Are COVID-19 "Rebounds" Only Possible After Taking Paxlovid?
Health
Navigating Hearing Loss And New Over-the-Counter Solutions
Recommendations From Our Store
My Science ShopDiscover STEM Kits
My Science ShopDiscover 2022 Calendar
My Science ShopStrange Science
My Science ShopElements Flashcards
Shop Now
Stay Curious
Join
Our List