To Mend a Broken Heart, Researchers Start in the Stomach 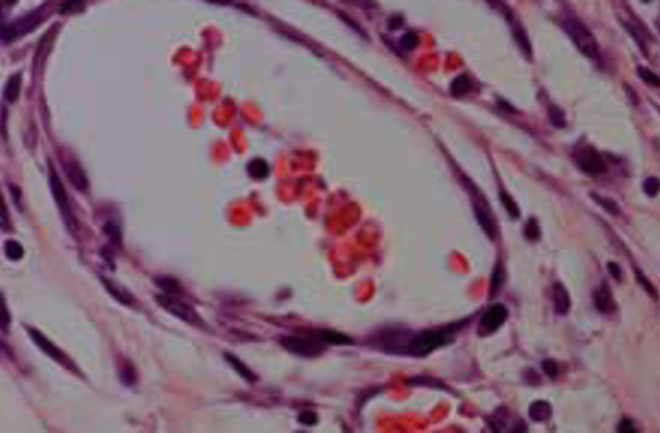 It may soon get easier to fix a broken hearts. Researchers have taken the next step towards heart patches that could one day help people recover from heart attacks. Scientists have been experimenting with different ways to integrate new stem cells or cardiac cells with damaged heart tissue, but it's a difficult task: the patches must be flexible enough to contract with the beating heart yet strong enough to hold up under the repetitive motion, and blood vessels must be coaxed through the new tissue to prevent the implanted cells from dying. In a new study published in Proceedings of the National Academy of Sciences researchers report that growing the patch in the belly of a rat brought better results when the patch was later moved to the rat's heart. The researchers

implanted patches of lab-grown heart cells onto rats' omentums—fatty tissue in the stomach that is rich in blood vessels and which has previously been used to foster regeneration of other organs. They left the patches on the omentums for a week before transferring them to the rats' intentionally damaged hearts [Scientific American].

These patches had more blood vessels than other patches that were transferred directly to the damaged hearts without a stop-over in the stomach.

This experiment is the first to show that such patches can actually improve the health of a heart after it has been damaged. The scientists measured an increase in the size of the muscle in damaged areas, and improved conduction of the electrical impulses needed for the heart to pump normally [BBC News].

While the results are encouraging, scientists say that the procedure may not be the best solution for elderly people who have suffered heart attacks, because it requires two separate surgeries that might prove dangerous to the frail. Related Content: 80beats: Injecting Special Protein Could Make Hearts Heal Themselves 80beats: Could Stem Cells Patch Up a Broken Heart? 80beats: Researchers Could Grow Replacement Tissue to Patch Broken Hearts Image: Tal Dvir. A cross-section of the new tissue with functional blood vessels (the hollow ovals) containing red blood cells.