Galileo’s contributions to astronomy changed the way that people perceived their world. Here’s how he talked about the cosmos and the pursuit of scientific truth. 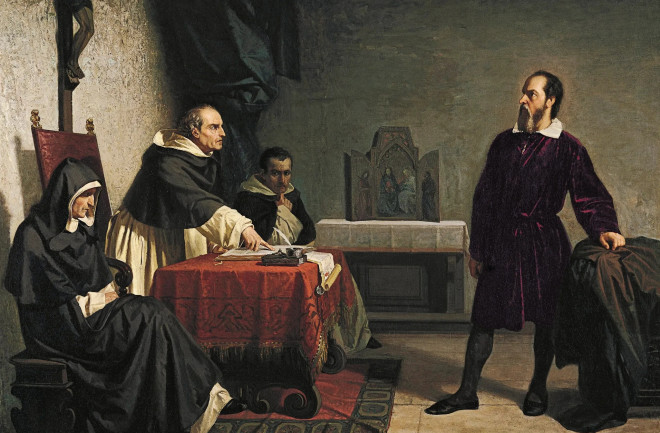 In 1609, the world witnessed an amazing achievement: An Italian inventor with an insatiable interest in mathematics, mechanics and astronomy learned that the latest novelty from the Netherlands — a compact cylinder featuring an arrangement of convex and concave lenses — permitted people to take closer looks at faraway objects. Immediately fashioning one of these tools for himself, the inventor pointed it toward the skies and shattered prevailing philosophies about the world.

Gazing through his telescope, Galileo Galilei saw that the universe was vaster and that the stars were more abundant than people had previously presumed. He also observed that splotches covered the sun and craters covered the moon and provided the first proof that the planets — including his own — spun perpetually around the sun. Galileo’s sightings clearly sent out shock waves. But who was the man behind the discoveries that would permanently change our world? This collection of quotes sheds some light onto the attitudes and philosophies of the famed astronomer.

These quotes were originally written in Latin and Italian, and they appeared in the scholar’s Sidereus Nuncius (1610), Il Saggiatore (1623) and Dialogue Concerning the Two Chief World Systems (1632), as well as Galileo’s letters to Belisario Vinta in 1610, Mark Wesler in 1612 and the Grand Duchess of Tuscany in 1615.

1. “I have observed the nature and the material of the Milky Way. With the aid of the telescope this has been scrutinized so directly and with such ocular certainty that all the disputes which have vexed philosophers through so many ages have been resolved, and we are at last freed from wordy debates about it.”

2. “The galaxy is, in fact, nothing but a congeries of innumerable stars grouped together in clusters."

3. “The increase of known truths stimulates the investigation, establishment, and growth of the arts; not their diminution or destruction.”

4. “Philosophy is written in this grand book — I mean the universe — which stands continually open to our gaze, but it cannot be understood unless one first learns to comprehend the language in which it is written. It is written in the language of mathematics, and its characters are triangles, circles, and other geometric figures, without which it is humanly impossible to understand a single word of it; without these, one is wandering about in a dark labyrinth.”

5. “In the sciences the authority of thousands of opinions is not worth as much as one tiny spark of reason in an individual man.”

6. “To apply oneself to great inventions, starting from the smallest beginnings, is no task for ordinary minds; to divine that wonderful arts lie hid behind trivial and childish things is a conception for superhuman talents.”

7. “Nature … is inexorable and immutable; she never transgresses the laws imposed upon her, or cares a whit whether her abstruse reasons and methods of operation are understandable to men.”

8. “I do not feel obliged to believe that the same God who has endowed us with senses, reason, and intellect has intended us to forgo their use and by some other means to give us knowledge which we can attain by them.”

9. "The intention of the Holy Spirit is to teach us how one goes to heaven, not how the heavens go."

10. “I think that in discussions of physical problems we ought to begin not from the authority of scriptural passages but from sense-experiences and necessary demonstrations.”

11. “It always seems to me extreme rashness on the part of some when they want to make human abilities the measure of what nature can do. On the contrary, there is not a single effect in nature, even the least that exists, such that the most ingenious theorists can arrive at a complete understanding of it.”

12. “I cannot without great astonishment — I might say without great insult to my intelligence — hear it attributed as a prime perfection and nobility of the natural and integral bodies of the universe that they are invariant, immutable, inalterable, etc., while on the other hand it is called a great imperfection to be alterable, generable, mutable, etc. For my part I consider the earth very noble and admirable precisely because of the diverse alterations, changes, generations, etc. that occur in it incessantly.”

13. “I give infinite thanks to God, who has been pleased to make me the first observer of marvelous things.”

These quotes are also commonly attributed to Galileo:

14. “All truths are easy to understand once they are discovered; the point is to discover them.”

15. “You cannot teach a man anything, you can only help him to find it within himself.”

17. “I have never met a man so ignorant that I could not learn something from him.”

18. "By denying scientific principles, one may maintain any paradox."

20. "It is surely harmful to souls to make it a heresy to believe what is proved."