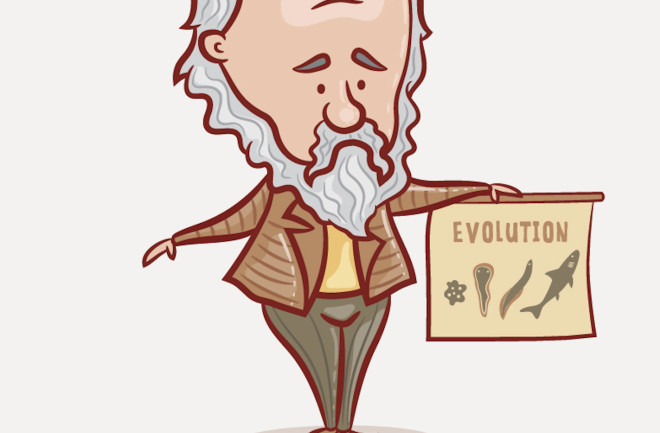 When you hear the name Charles Darwin, what do you think of? Let's begin with the most famous—the theory of evolution—you know, the one that explains how organisms evolve and survive through natural selection. In 1837, Darwin was just short of 30 when he gave birth to a new branch of life sciences called evolutionary biology. He had just finished up a voyage aboard the HMS Beagle, on which he sailed around South America and spent a considerable amount of time collecting observations on different species of plants and animals. During that five-year adventure, Darwin made a notable observation while collecting bird specimens from the Galapagos Islands. He determined that the finches on the island shared similarities with the ones on the mainland, yet had modified features that allowed them to gather food easily. Darwin concluded that the different finches ultimately belonged to the same set of species. These observations ultimately gave rise to the famed theory that evolution occurs by a process of natural selection.

The story of Darwin's discovery of the theory of evolution is one we are all familiar with. What we may not know, however, is that Darwin had a rather adventurous life. Here are 7 things that history books may have failed to mention that make the father of evolution even more remarkable and definitely relatable.

1. Darwin dropped out of medical school.

He may have been the master of evolutionary biology but unfortunately, Darwin couldn't master medicine. Born to a family of physicians, Darwin enrolled in the University of Edinburgh in 1825 at the ripe age of 16. Unfortunately, the man's interests lay elsewhere as he hated the sight of blood as well as his studies. He dropped out two years later.

2. He had an appreciation for unusual food.

Exotic animals weren't just in Darwin's notebooks — they were also on his plates. Apparently, Darwin was a part of the Glutton Club at Cambridge University, a group dedicated to devouring strange animals that were unknown to the human palette. The menu included items such as hawks and owls...yum! Guess you can definitely add foodie to Darwin's list.

3. There is a mountain named after Charles Darwin.

Here's something most of us can't say we've gotten as a birthday present: a mountain! On his 25th birthday, Darwin received a rather large gift, 2,488 meters or 8,163 feet, to be exact. The gift came from Captain FitzRoy of the HMS Beagle. Sitting atop the Cordillera Darwin, a mountain range located in the southwestern part of Tierra del Fuego, Mount Darwin was a gracious gift.

4. He suffered from some mysterious illnesses.

Unfortunately, Darwin was subject to ill health. Varying from chronic stomach pains to bearing with the loss of three children, Darwin had his fair share of mental and physical agony. Despite consulting many doctors, he quietly suffered without a permanent cure.

5. He had a pros-and-cons list on whether to marry.

To marry or not marry — that was Charles Darwin's question, at least in his journal where he weighed the pros and cons of marriage.

Cons: Freedom, Travel, and of course, Not forced to visit relatives

The kicker...he ultimately married his cousin. Of course, this was more acceptable during his time.

It is, unfortunately, not uncommon for people of color to go unseen in science, especially in Darwin's time. The man who taught the father of evolution the art of preserving animal bodies is one of them. Darwin learned taxidermy from John Edmonstone, a naturalist and formerly enslaved man. Shortly after gaining his freedom in 1817, Edmonstone moved to Edinburgh and sought a living by teaching taxidermy to students at Edinburgh University. Shortly after, an intrigued Darwin sought lessons from Edmonstone to learn this invaluable skill.

7. Darwin received an apology from the Church of England...126 years later.

Darwin faced many scrutinizers for his theory of evolution and the Church of England was one of them. Now, more than a century later, they have publicly apologized for misunderstanding the father of evolution.