Though Galileo pioneered modern physics and astronomy, many of us remain in the dark regarding the details of his vibrant personal life and prolific career. 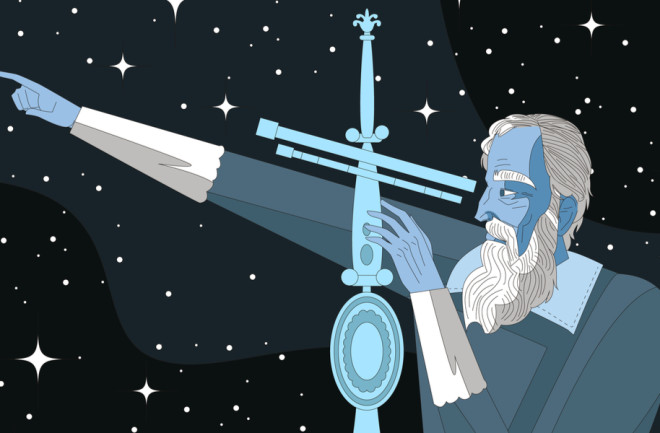 As a founding father in the fields of physics and astronomy, Galileo Galilei is known for countless contributions to science. The Italian thinker stressed a methodical, mathematical approach to studying the universe, and inspired the modern scientific method that remains a bedrock of scientific inquiry — even 380 years after his death. His innovations in the realm of motion and gravity are equally exceptional and have laid the foundations for today’s physics and made him one of the greatest scientists of all time. But all these contributions are eclipsed by his astronomical observations, which highlighted spots on the sun, craters on the moon, and stars throughout the Milky Way — not to mention his monumental findings on how the cosmos revolve around the sun.

“I discovered in the heavens many things that had not been seen before our own age,” Galileo wrote in 1615. Indeed, he transformed the way in which people perceived the world. Here’s 12 intriguing facts about his life and career that may not be so familiar:

He was born in Tuscany, Italy in 1564, when parents frequently provided their sons with personal names inspired by their traditional family identifiers. In fact, Galileo’s forebearers actually used the terms “Galileo” and “Galilei” interchangeably as a surname throughout the years. Though this sounds confusing today, people at this time perceived naming conventions as fairly flexible. Most Italians, including Galileo, would’ve introduced themselves with only a single name, which they occasionally supplemented with their occupation, town of origin, father’s first name or traditional family name.

He Was a Real Renaissance Man (Even as a Boy)

Throughout his adulthood, Galileo worked as an astronomer, physicist, philosopher, inventor and mathematician. His status as an academic polymath can be traced back to his boyhood. Galileo already showed skill in these topics as a child, as well as an aptitude in several artistic areas. He learned all about music from his father, Vincenzo Galilei, who worked as a court musician and composer. These lessons inspired Galileo’s lifelong passion for several  instruments, particularly the lute, which he supposedly mastered in “charm of style and delicacy of touch” as a boy. Galileo also cultivated talent as an artist during his childhood and seriously considered a career as a painter. In fact, later in life, Galileo joined the Accademia delle Arti del Disegno (Academy of Drawing Arts) in Florence and would go on to advise the era’s top painters on chiaroscuro and perspective.

The Scientist Dropped Out of University

Due to his exceptional intelligence, Galileo was sent to study at the University of Pisa at age 16. There, the young man initially enrolled as a medical student but became increasingly mesmerized by mathematics. The world, Galileo would ultimately write, “is written in mathematical language, and its characters are triangles, circles, and other geometric figures, without which it is impossible to humanly understand a word.” But in 1585, financial constraints forced the aspiring scholar to abandon his studies at the university. Galileo continued researching mathematics independently and as a tutor until 1589, when he triumphantly returned to the institution — this time as a full-fledged professor of mathematics.

He Was Known as a Theatrical (And Controversial) Teacher

Galileo’s lectures about mathematics, mechanics and astronomy attracted some serious attention. In fact, one of Galileo’s students, Vincenzo Viviani, claimed that crowds formed as the professor tossed objects from the famous tower of Pisa and showed once and for all that the speed of their fall was isolated from their weight. (After all, this theory clashed with accepted thinking at the time.) Galileo’s work with motion propelled the scholar into becoming a major academic player, though it initiated arguments with other academics who were insulted that the professor was undermining the very theories he was assigned to teach. In 1592, Galileo’s contract at the University of Pisa lapsed, and the scholar transitioned to the University of Padua, where he worked from 1592 to 1610. As Galileo’s career progressed, so did the controversies.

Galileo Was Never Married, but He Did Start a Family

Throughout the Renaissance, scholars and academics seldom married. So according to this tradition, Galileo never tied the knot. That said, the academic was associated with a woman named Marina Gamba, with whom he raised three children: Virginia (born in 1600), Livia (born in 1601), and Vincenzo (born in 1606). Ultimately, their two daughters joined the convent of San Matteo in Arcetri, and their son pursued a career as a musician.

He Was a Prolific Inventor

Galileo is praised for several important inventions, including the thermoscope (a precursor to the modern thermometer that indicates temperature fluctuations) and several forms of sectors, also known as military compasses. The latter tool was used for multiplication and division and finding square and cube roots, among other mathematical functions. Galileo sold these inventions to supplement his salary as a professor.

Galileo Turned the Telescope to the Skies

In 1609, Galileo learned of an invention in the Netherlands that made distant objects appear much closer, and the scholar immediately moved to make something similar. While he was not the first to fashion the telescope, Galileo’s work with the tool was certainly innovative. The astronomer improved the tool to magnify objects up to 20 to 30 times and, much more famously, was one of the first individuals to point it toward the sky.

The Sights in His Telescope Shook the World

Galileo’s observations revealed that far more stars were scattered through the skies than previously acknowledged; that the moon’s surface was craggy and covered in craters; and that the sun was spattered with sunspots. These findings suggested for the first time that the celestial world was far from perfect.  Galileo also observed that a strange ring surrounds Saturn, four satellite moons move around Jupiter, and that Venus transitions through phases that mirror our own moon’s — therefore proving that this “sister planet” really revolved around the sun. These observations would prove imperative in shattering the then-prevalent theory claiming the universe was centered around the Earth.

He Was All the Rage Among Royalty

These astronomical breakthroughs, which were described in a 1610 text, Sidereus Nuncius (The Sidereal Messenger), brought some serious attention to the scholar. Galileo capitalized on the publicity by dedicating the text to the ruler of Tuscany, Cosimo II de Medici, and naming Jupiter’s satellites the “Medician Stars” after the same figure, who was a previous student of his (and who would become a well-known patron of the arts and sciences). This sort of gesture was prevalent throughout the Renaissance, and many influential individuals clamored to support artists and academics to increase their personal prestige. For his discoveries, Galileo was rewarded with an appointment within Cosimo’s court.

Galileo Clashed With the Church (But Not Catholicism Itself)

Though these telescopic sightings proved to Galileo that the universe was centered around the sun, his increasingly outspoken support of “heliocentrism” had some serious consequences. At the time, the Catholic Church fought to maintain the traditional model of the cosmos, and in 1616 they denounced heliocentrism as “foolish and absurd” and “formally heretical,” since it seemed to contradict several Bible passages. As a result, Galileo avoided the topic publicly until 1632, when he published Dialogue Concerning the Two Chief World Systems, which seemed to ardently support heliocentrism. Galileo was immediately tried by the Vatican, whereupon he was determined to be "vehemently suspect of heresy” and sentenced to indefinite house arrest. Though Galileo is famed for this conflict, the scholar was surprisingly devout in his personal life: He was raised as a staunch Catholic and even considered the priesthood as a potential career.

He Became Blind (But Not by the Sun)

Galileo continued working and writing while imprisoned for heresy in his home near Florence, and during this time, his vision began to blur. By 1638, the astronomer had become completely blind. Though it was thought at the time that his blindness resulted from staring at the sun, this condition was probably caused by cataracts and glaucoma.

The Astronomer Continues To Point Towards the Skies

Today, the Museo Galileo in Florence houses the world’s largest collection of Galileo’s trinkets and tools, including two surviving telescopes that continue to inspire scientific minds. Interestingly enough, these telescopes appear alongside several of Galileo’s detached fingers, which were removed from his body by ardent devotees following his death. Today, these fingers are displayed directing upwards, pushing people to continue to challenge and refine their conceptions of the cosmos.