Work Starts on Spaceport America, the Tourist's Gateway to Space 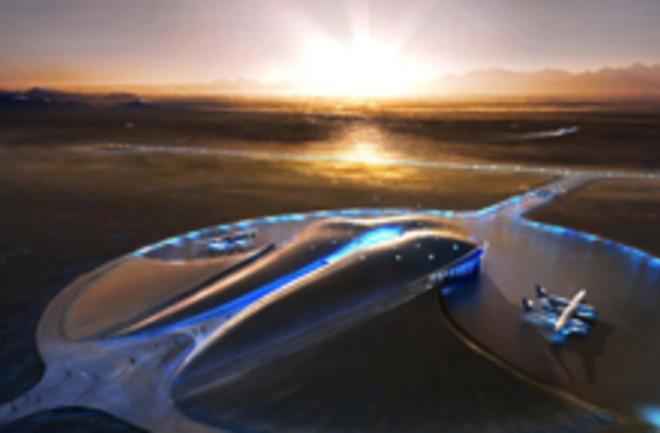 Five years after the dawn of the new private-sector space age, New Mexico officials broke ground on Spaceport America, the $200 million project that is destined to be a hub for wealthy space tourists and space entrepreneurs of all stripes. The new space age

dates back to June 21, 2004, when the SpaceShipOne rocket plane became the first privately developed craft to carry a civilian astronaut into outer space [MSNBC].

Now, the company Virgin Galactic is hard at work on SpaceShipTwo, which may be ready to carry paying passengers to the edge of space in 2011 or 2012. Richard Branson's Virgin Galactic plans to base its operations at Spaceport America, but New Mexico officials hope the space terminal will attract other innovative businesses as well.

Steve Landeene, executive director of the New Mexico Spaceport Authority, said: "The future is here and we are not too far off a new age of space. It is not just about private astronauts going up, it is about bringing the cost structure down and about new medicines, solar power in space and the entire range of scientific benefits that can come from it" [BBC News].

Virgin Galactic's space tourism system uses two vehicles: a "mothership" called the WhiteKnightTwo, which takes off like a conventional airplane, and SpaceShipTwo, which is slung beneath the mothership and released at 50,000 feet, when it ignites its rocket engine. WhiteKnightTwo

is to be publicly unveiled at the Oshkosh airshow in Wisconsin in July, while SpaceShipTwo should begin test glides in December. If all goes to plan, the inaugural flight should carry Sir Richard Branson, his family and spaceship designer Burt Rutan on a sub-orbital ride within two years. They will be followed by a waiting list of 300 who have all ignored the current economic climate and are willing to pay about $200,000 for the privilege of experiencing six minutes of weightlessness during the two-hour flight [BBC News].

However, there are still plenty of technical hurdles to overcome before space tourism can become a commonplace luxury. Those difficulties were emphasized at the spaceport's groundbreaking on Friday, when dignitaries waited in vain for a scheduled fly-over by the WhiteKnightTwo. Virgin Galactic president Will Whitehorn later announced that the mothership had taken off as planned, but an indicator light forced it to land at the Phoenix airport for a safety check. Whitehorn emphasized that unlike

the superpowers who started the Space Age, the SpaceShipTwo team feels no pressure to run a space race. "We're in a 'race' with only one thing - a race with safety," Whitehorn told the crowd in New Mexico [MSNBC].