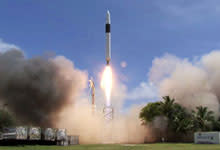 The private space company Space Exploration Technologies, or SpaceX, successfully launched a rocket into orbit on Sunday, marking a major milestone in the growth of privately funded space ventures. The achievement followed three failed launches of the Falcon 1 rocket over the past two years.

"That was frickin' awesome," Elon Musk, SpaceX's millionaire founder and chief executive officer, told cheering employees.... "There were a lot of people who thought we couldn't do it ... but, you know, as the saying goes, 'The fourth time's the charm,'" he said after the rocket soared into orbit from its launch pad on Omelek Island, 2,500 miles (4,000 kilometers) southwest of Hawaii in the Pacific Ocean [MSNBC].

SpaceX's first launch in 2006 failed less than a minute into flight due to a fuel leak; a year later, the second rocket soared to 180 miles above earth before its engines shut off prematurely. The third test flight occurred this past August, and ended in disappointment when the first-stage booster rocket didn't separate cleanly from the second stage, which was meant to continue on into orbit.

The recently beefed-up, first-stage Merlin engine had more kick in it than the previous version of the engine, and after separation still had enough energy to run into the second stage above it, sending it tumbling off course [Wired News].

But after each failure Musk declared that the company had learned from its mistakes, and would press on. Musk, who made his millions when he sold the internet company PayPal to eBay in 2002, is determined to develop a low-cost system for sending rockets into orbit; the kerosene-fueled Falcon 1 has a reported price tag of $7.9 million.

After investing some $120 million of his own money and battling years of skepticism from both the aerospace industry and the parts of the Pentagon, Mr. Musk, a former Internet entrepreneur, said he expects that the successful launch will "unlock a large number" of additional launch contracts that have been under negotiation [The Wall Street Journal].

SpaceX is also developing a larger launch vehicle for NASA; the Falcon 9 is intended to ferry cargo to the International Space Station after the retirement of the space shuttle fleet in 2010. Image: SpaceX Related Posts: Russian Invasion of Georgia Imperils U.S. Access to Space StationMillionaire's Private Rocket Fails to Reach Orbit on Third Try