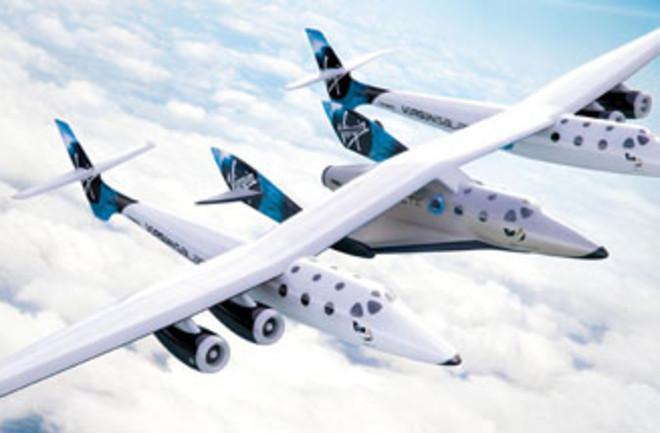 At an aircraft hangar deep in the Mojave Desert this morning, the space tourism company Virgin Galactic unveiled one of the crafts that will boost paying customers up to the edge of space. Called the "WhiteKnight Two" by British tycoon Richard Branson, the vehicle will act as a mothership by flying to 48,000 feet with a smaller spacecraft slung between its twin fuselages. Then the spacecraft, SpaceShip Two, will detach and fire its rocket engines to take the six passengers the rest of the way up.

A crowd of engineers, dignitaries and space enthusiasts gathered inside a Mojave Desert hangar for the unveiling countdown. As the hangar door flew open, White Knight Two appeared outside under the sunny desert sky with Branson and American aerospace pioneer Burt Rutan waving from the cabin. White Knight Two, billed as the world's largest all-carbon-composite aircraft, is "one of the most beautiful and extraordinary aviation vehicles ever developed," Branson said [AP].

While SpaceShip Two is not yet complete, Branson said he hopes to begin test flights of the conjoined crafts in late 2009, with commercial flights possibly beginning in 2010.

Would-be astronauts must pay $200,000 (£100,000) to guarantee a space flight, which will propel passengers into the atmosphere for two-and-a-half hours, experiencing around five minutes of weightlessness [Telegraph].

That high price tag hasn't been a deterrent to some dedicated explorers; Branson said today that 270 people have made reservations so far.

The rollout came a year after a deadly accident that killed three engineers and set back the effort to launch the first commercial spaceflight [Los Angeles Times].

But Branson has emphasized the safety of the vehicles, and said that his nearest and dearest will happily test them out; he

said that he and members of his family would be among the first wave of space travelers, and admitted he expected to be nervous at take-off. "I'm going up myself, and I'm sure my stomach is going to turn, my children, my parents are going up," Branson said [AFP]

, adding that his 92-year-old father is expected to be part of that trip. For more on Virgin Galactic, read DISCOVER's coverage of its environmentally friendly spaceport, and an interview with spacecraft design wizard Burt Rutan. Image: Virgin Galactic