SpaceX Scores a NASA Contract to Resupply the Space Station 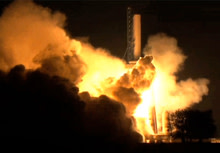 In a vote of confidence for the fledgling commercial space industry, NASA has awarded contracts that could total $3.5 billion to two companies that plan to build rockets and ferry supplies to the International Space Station. The companies, SpaceX and Orbital Sciences Corporation, could begin launches as soon as 2010 to help fill the gap between the space shuttle's expected retirement and the introduction of NASA's next-generation rocket, the Ares I. The companies beat out traditional NASA contractors like Boeing and Lockheed Martin to snag the contracts. Experts say that giving a contract to the young company SpaceX is a particularly bold bet.

SpaceX, the plan's linchpin because it is intended to begin the service, carries a relatively short pedigree as a government contractor and can point to only one successful launch, after three failures, of a smaller version of its Falcon rocket intended to supply the space station. Orbital Sciences is an established, midsize aerospace contractor but lacks a proven track record for the revamped version of the Taurus rocket it will use to supply the station [The Wall Street Journal, subscription required].

In a break with past practice the contractors won't just build the rockets, they'll also manage the cargo resupply missions themselves. NASA is also giving the companies more autonomy during the development of their rockets.

Instead of operating as a traditional NASA-run program -- in which the agency determines what will be built, pays for it and then operates the systems -- Tuesday's decision calls for the contractors to develop and largely pay for a new generation of rockets and cargo modules to service the space station. The bulk of the money, payable over eight years, won't begin to flow until the companies meet design and performance milestones [The Wall Street Journal, subscription required].

For SpaceX's founder Elon Musk, the cargo transport contract is a step towards his goal of using the company's rockets to ferry astronauts to the space station, and beyond.

Mr. Musk said his company was an expression of his deep belief that leaving Earth was the next phase of human existence. “The thing that is important to the future of life itself is having a second planet where life can be sustained and grow,” he said. His cargo rockets have been designed from the start to meet NASA’s requirements for human spaceflight, including the 40 percent margin of safety that NASA demands on human-rated launching vehicles [The New York Times].