The "NASCAR of the Skies" Sends up Its First Rocket 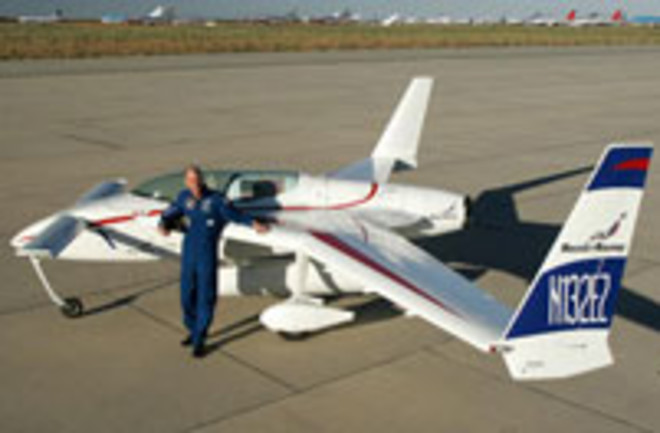 A rocket-powered plane trailing a bright blaze of flame streaked across the Wisconsin sky yesterday, as spectators at the EAA AirVenture air show got the first glimpse of a new sport called rocket racing. But in a setback, the Rocket Racing League wasn't able to send two rockets soaring into the sky to race against each other as hoped, as the Federal Aviation Administration is still in the process of approving the second aircraft.

[T]he Rocket Racing League is aimed at melding human spaceflight with NASCAR-like competitions in the sky. The racers are designed to belch 15-foot (4.5-meter) flames from their engines that can be easily seen by spectators, and carry limited amounts of rocket fuel to fly through a three-dimensional aerial race course [SPACE.com].

League officials hope to eventually let onlookers follow the planes' progress through the looping flight path by projecting videos from cockpit cameras onto huge screens, and are also hoping to build a computer game in which players could race against the real pilots. Yesterday's debut flight was less dramatic than the ambitious races league officials have planned for the future. Former space shuttle commander Richard Searfoss

fired the engine for takeoff, and for the crowd along the flight line, the flame was bright enough to bring on a squint. The 1,500 pounds of thrust quickly took the plane to a height of several hundred feet, and Searfoss turned off the engine. He then relaxed the plane into a curving glide. He popped the engine a few more times for several seconds, turning a dark speck in the sky to a brilliant point of light, before gliding to the airstrip [The New York Times].

The rocket engine is designed to be turned on and off to allow the pilot to alternate between fierce acceleration and smooth glides. The plane that took to the air is powered by a liquid oxygen and kerosene engine built by the space startup company Xcor. League officials

say they are still waiting for Federal Aviation Administration approval for the second plane, which carries an engine built by Armadillo Aerospace of Mesquite, Texas. The Armadillo plane remained on display, with its engine exposed, in the league's demonstration tent [New Scientist].