Evidence indicates that early humans may have acquired a taste for meat before they could cook it, or the tools that Homo Sapiens and Neanderthals used. 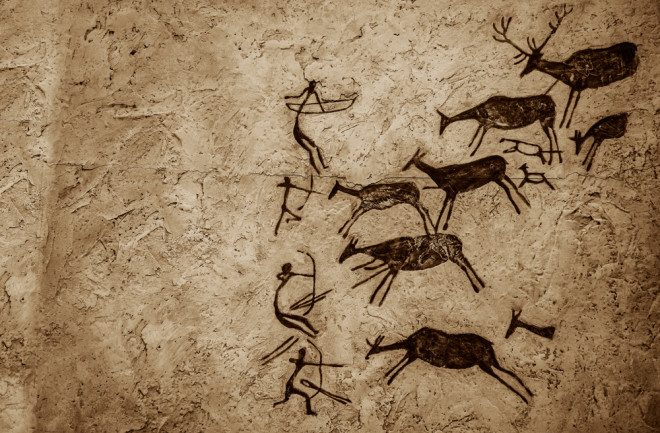 Early hominids have been eating meat long before they were even considered modern humans. The meat was likely raw because they didn’t yet have fire to cook it, and it may have been scavenged. Nonetheless, at some point, millions of years ago, they began to crave animals.

“At around 2.6 million years ago, we see an interest in meat from early hominids and the invention of flake stone tools to cut that meat,” says Henry Bunn, a professor of African paleoanthropology at the University of Wisconsin Madison.

But while early humans may have craved meat, they didn’t know how to access it regularly. It wasn’t until 2 to 1.8 million years ago that Homo erectus had a brain and body size big enough to hunt. Sites found in places like Olduvai Gorge in Tanzania show that by 2 million years ago, archaic humans concentrated in one area with thousands of flake stone tools and enough bones to show that hunting was likely common.

“Most of the animals found at this and other sites are mid-range bovids, a family of hoofed and horned animals that include buffalo, antelopes, wildebeests, sheep and goats,” says Bunn.

From Bovids to Wild Horses

When early humans first started hunting, they would have been eating bovids that resemble impala or wildebeests in size and stature. The site at Olduvai Gorge, dated from about 2 to 1.8 million years ago, showed the remains of up to 48 bovids that early humans likely butchered and ate. Bunn says that sites from around this time show no evidence of fire. That wouldn’t come until around 800,000 years ago, but early humans likely did gather here during the day with their kills. They may also have paired their meat with gathered plant foods, though it would be impossible to know this for sure.

Another site that dates back to 300,000 years ago in Schöningen, northern Germany, shows that Homo heidelbergensis likely butchered wild horses. The findings, documented in a 2015 study in the Journal of Human Evolution, show that prey was hunted with wooden spears, also found at the site. Many archeological sites also include a mix of cervids, or animals from the deer family that includes elk, reindeer and moose, depending on the part of the world where early humans were hunting.

As archaic humans attained larger brains and started to look more anatomically human, they began to hunt slightly larger animals, says Joseph Ferraro, director of the Institute of Archaeology at Baylor University. “We have good evidence that they were hunting larger-sized animals than they were earlier on,” he says.

It’s also based on geography. By this time, humans had spread to Europe during a glacial period where few vegetables were available. Regular access to meat would have been crucial. Early humans that lived near the water would have also hunted fish, crabs, seabirds and shellfish.

By the time we get to Homo sapiens and Neanderthals in Africa and Europe, tools and weapons would have allowed them to “exploit a broader range of taxa,” says Ferraro. Additionally, there’s evidence, especially in North America and Siberia, of H. sapiens hunting megafauna. The earliest evidence in North America and Europe shows various sites that include woolly mammoths and other larger mammals.

“Paleo Indians at the end of the Pleistocene (around 9,000 years ago) and their spear points are often found intimately associated with the remains of woolly mammoths and large Pleistocene bison,” says Bunn. H. sapiens were hunting these giant animals regularly, and there’s even the highly heated argument that they contributed to the megafaunal extinction.

Read More: Did Humans Hunt the Biggest Animals to Extinction?

Since early humans first got the taste for meat, they’ve been honing their hunting skills to enjoy it regularly. At first, the meat was smaller and raw, but over time, a bigger brain and better weapons meant they could hunt larger beasts and cook them over the open flame. After all, our ability to hunt these larger animals and gather by the fire to eat them is, according to experts, an important aspect of what it means to be human.