Homo heidelbergensis: The Answer to a Mysterious Period in Human History?

There's kind of a 700,000 year hole in our understanding of human evolutionary history. 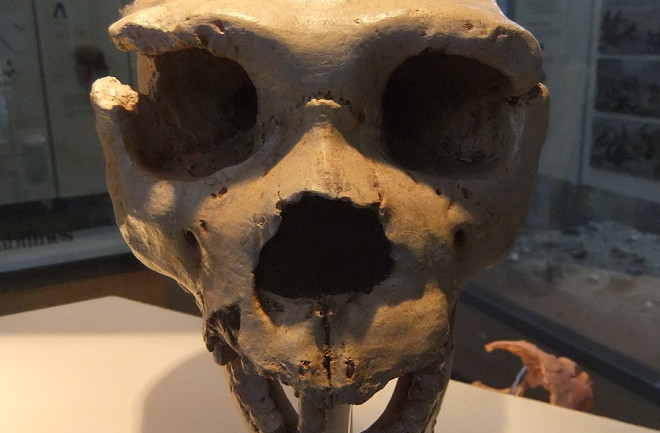 Cranium 5, a skull found at Sima de los Huesos and thought to be either a late Homo heidelbergensis or an early Neanderthal. (Credit: Rept0n1x/Wikimedia Commons)

There’s a murky chapter in human evolution, one that occurs right before our species entered the scene.

Over 1 million years ago our ancestors belonged to the primitive-looking species Homo erectus. Jump to 300,000 years ago and Earth is home to at least three lineages of big-brained humans: Homo sapiens, Neanderthals and Denisovans. So what happened in the intervening 700,000 years?

There’s a wealth of research on H. erectus as well as modern humans and our cousins, Neanderthals and Denisovans. Much less is known about our Middle Pleistocene predecessors. Since the first specimen from the time span was reported in 1908 — a 610,000-year-old jawbone classified as Homo heidelbergensis — researchers have found Mid-Pleistocene fossils across Europe, Asia and Africa.

These little-understood hominins increased in brain size, spread to new lands and hunted challenging game with finely crafted weapons. One of these lineages led to modern humans. But the details of their lives and evolutionary relationships are still slim.

Now, thanks to ancient DNA analyses, our Mid-Pleistocene family tree is becoming clearer. But other questions remain. Above all: Were these ancestors modern enough that we would consider them human?

Between H. erectus and H. sapiens

Most anthropologists agree that if you traced your ancestry back about 1 million years, you’d find a population of Homo erectus. From the neck down, the creatures resembled present-day people: They had modern stature and body proportions, distinguished by relatively long legs and short arms. But no H. erectus would be mistaken for a H. sapiens. With hulking brows and flatter skulls, the species had brains about two-thirds our size: The average volume of 30 well-preserved H. erectus skulls was 950 cm3, compared to 1350 cm3 for recent humans.

Fast-forward to 300,000 years ago and the H. erectus lineage gave rise to at least three varieties of humans: European-based Neanderthals, Denisovans in Asia and the ancestors of all living people, Homo sapiens in Africa.

The intervening span is what anthropologists call “the muddle in the middle”. The time period is characterized by poorly understood fossils, book-ended by better-studied H. erectus and modern humans.

One spectacular site, Sima de los Huesos in Spain, has yielded the most Mid-Pleistocene hominin remains. Excavations there since the 1980s have unearthed more than 7,000 fossils representing at least 28 individuals dated to 430,000 years ago.

But other, similar-looking Mid-Pleistocene hominins have been found across Europe, Asia and Africa. They appear somewhat primitive, thanks to robust faces and brows, but have skull volumes around 1230 cm2, intermediate between H. erectus and later human averages. These ancient humans had evolved from H. erectus, but they had not yet become Neanderthals, Denisovans or H. sapiens.

Our direct ancestors were among these bigger-brained hominins spread across the Old World. But anthropologists disagree about which specimens to include in this illustrious lineage, and what to call them.

One view is all big-brained Mid-Pleistocene hominins — from Africa, Europe and Asia — belong to a single species, usually called Homo heidelbergensis (here, here). The lineage descended from Homo erectus and led to later humans. In this scenario, Homo heidelbergensis was the shared ancestor of Homo sapiens, Neanderthals and Denisovans.

Others contend that Mid-Pleistocene specimens show too much variation to be lumped into a single species. This implies the global pool of H. heidelbergensis-looking hominins had already formed distinct lineages. Proponents of this hypothesis often draw the division between African and Eurasian fossils. They use Homo heidelbergensis for Eurasian fossils leading to Neanderthals and Denisovans, and Homo rhodesiensis for Mid-Pleistocene African hominins likely on the lineage leading to modern humans. The shared ancestor gets pushed to earlier specimens, such as ~800,000-year-old remains from Spain sometimes called Homo antecessor.

But population territories were probably more complicated than simple continental borders. Groups expanded, contracted and migrated as environments changed. They overlapped and interbred. The result was that, even if there were multiple species of Mid-Pleistocene humans, they likely intermingled with each other, both geographically and sexually.

Tidying Up the Muddle

Recent paleogenomics work has imposed some order on the muddle. By comparing DNA differences between lineages, researchers have estimated the timing of the evolutionary splits between modern humans, Neanderthals and Denisovans, which took place during the Mid-Pleistocene. Using this molecular clock dating approach, a 2017 Science paper reported that Homo sapiens diverged from the others around 520,000 to 630,000 years ago, and then the sister species Neanderthals and Denisovans split 390,000 to 440,000 years ago.

That timeline agrees with a 2016 genomic analysis of the ~430,000 year old Sima fossils — the oldest human ancient DNA yet recovered. The sequences suggest the individuals belonged to the Neanderthal lineage after it split from Denisovans. It’s safe to classify the Sima hominins as Neanderthal ancestors.

But getting human DNA this old was a near miracle. The molecules survived because the cave keeps a cool 50 degrees Fahrenheit; they were recovered because researchers put in extraordinary effort. The scientists salvaged just 0.1 percent of the Sima genome from one bone and tooth.

Ancient DNA won’t be found in most Mid-Pleistocene fossils, especially those from hot, tropical climates, harsh on biomolecules. Still, the dates we do have — divergences between H. sapiens, Neanderthals and Denisovans — provide a strong foundation for making sense of the muddle in the middle.

Other questions about our ancestors can’t be answered by DNA. Regardless of which population(s) directly led to H. sapiens, Mid-Pleistocene hominins across the globe increased in brain size, which seems to have enabled more advanced behaviors. Compared to earlier H. erectus, stone tools made by Mid-Pleistocene hominins were more sophisticated — thinner and more symmetrical. They also hunted larger, more challenging prey including herds of elephants, horses and rhino. Killing these animals requires planning, experience and cooperation.

Perhaps these ancestors were more human than not.