Did Humans Hunt the Biggest Animals to Extinction?

Recent research suggests that humans likely drove the disappearance of large mammals in the Middle East, species by species. 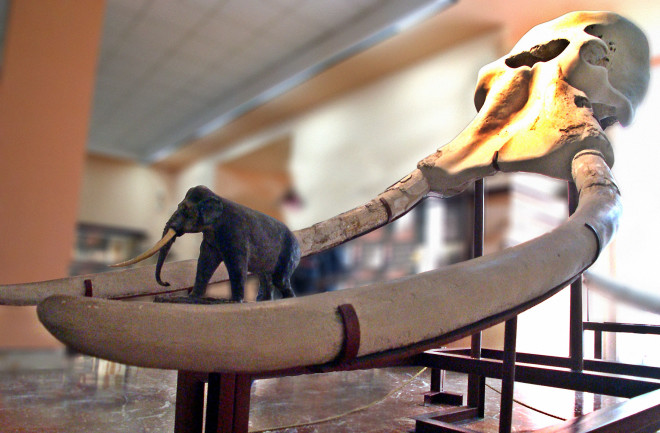 A million years ago the ecosystem of Israel and surrounding countries looked very different than it did today. Giant megafauna like elephants and aurochs, the wild ancestors of today’s domestic cows, roamed the land. But humans and our near ancestors began hunting these species to extinction. Straight-tusked elephants, the largest, were the first to disappear roughly 400,000 years ago, then the next largest animals followed like a line of toppling dominoes.

Researchers now believe that this trend reveals something about the very nature of our ancient ancestors in the Middle East, and why the ecosystem changed so drastically in many parts of the world due to hunting pressure, according to a study published in January in Quaternary Science Reviews. The progressive overexploitation of the largest prey animals may have led to large-scale cultural changes such as the adoption of agriculture when big prey resources became scarcer on the landscape, and even the evolution of humans.

“We believe that prey size decline during the Paleolithic was the organizing factor,” says Miki Ben-Dor, a prehistoric archaeologist at Tel Aviv University.

Most researchers know about the megafauna extinction that occurred roughly 50,000 years ago. But many hadn’t looked further back in the evidence. For the recently-published study, Ben-Dor and a team of colleagues that included archaeologists and zoologists examined data previously collected by themselves and other scholars. In the meta-analysis, they recorded species, size, weight and number of individual animals from fossil assemblages from 58 fossil sites.

Ben-Dor’s colleague Ran Barkai, also a prehistoric archaeologist at the University of Tel Aviv, noticed that straight-tusked elephant remains were present in Israel only alongside Homo erectus fossils, one of the ancestors of modern humans. Elephants and Homo erectus were found together in fossil deposits dating from 1.5 million years ago, when a new hominin began to appear who was more closely related to Homo sapiens.

Over the years, more large animals went extinct. The researchers’ analysis revealed a continuous decline from 1.5 million years ago to 50,000 years ago. “The largest prey became extinct and [hominins] moved to the next largest one until there was nothing left,” Barkai says. And this didn’t just happen in the Middle East, the authors say. The same pattern occurred in Europe, North America and other areas. “It really is a worldwide phenomenon,” Ben-Dor says.

John Shea, a paleontologist at Stony Brook University in New York who wasn’t involved with this new study, doesn’t necessarily agree with this larger statement. While he commends the research the authors did, and believes that Ben-Dor, Barkai and their colleagues have shown that the size of prey declined progressively in the area of the Middle East they examined, he’s not sure that this proves that the same thing occurred all over the world. A study published in 2021 in Nature Communications, for example, found that it was climate change, not human overhunting, that led to megafauna population declines in North America. “Trend theories about human evolution have a long history of being wrong," Shea says. "I’m not saying this one is wrong, but it’s in good company."

Shea noted that the area the researchers focused on has peculiar characteristics that might not be replicated in other regions. The Mediterranean Sea to the west, desert to the south, and mountains of Iran and Turkey to the north and east create natural boundaries. As a result, larger prey items had nowhere to escape from humans once the latter appeared in the region.

If the same was true everywhere, Shea wonders why there would still be elephants and giraffes in Africa, for example. “People have been hunting [elephants] in Africa for longer than everywhere else because people have been living longer in Africa,” Shea says, adding that to prove that a similar pattern occurred in Africa or even Europe, you’d need to replicate their study with some of the well-documented fossil records from those places. He also says that very large animals like hippopotamus live for some time in the region even, as humans were mostly hunting smaller animals.

Barkai and Ben-Dor say the study isn’t just about extinction by an average decline in prey size in the fossil record. Prey bones that appeared around 400,000 years ago were mostly adult fallow deer, for example, and they gradually became smaller over time. By 10,500 years ago, the average mass of animals had dropped to 1.7 percent of what it was 1.5 million years ago. “This is one of the problems why people didn’t identify the trend, because they were [just] looking at the extinctions,” Ben-Dor says.

Rhinos also appeared more commonly in the earliest sites, the researchers found. They didn’t go extinct until quite late, but their presence definitely became much less common over the years.

Adapting to a New Reality

Ben-Dor says that the disappearance of elephants and the appearance of a new hominin may have been connected. The hominin fossils known from this period aren’t Homo erectus but something else that hasn’t yet been named by scientists. “Homo erectus changed into something else,” Barkai says. As the straight-tusked elephants were extirpated from the area, these hominins needed to evolve to hunt smaller prey items — something that would have required more energy. “Once elephants disappeared from the Levant about 400,000 years ago, Homo erectus in the Levant had to adapt, had to change in order to be able to hunt much smaller and quicker taxa,” Barkai says, adding that humans may have become more agile and smaller to be able to manage this hunting regularly.

Barkai also says the disappearance of large prey items that would have fed many humans for some time was the trigger for the adaptation of new technology. Evidence of fire also first appeared around this time. “Barbecues started 400,000 years ago in the Levant,” he says, adding that cooking meat would have added to the calorie content of meals.

Some researchers believe that the development of new technology like the bow and arrow allowed humans to hunt new prey items from a distance. But Ben-Dor and Barkai think that the development of the bow and arrow occurred as a result of our ancestors having to cope with hunting smaller animals, rather than the other way around. Necessity drove technological change rather than technological change driving a shift in culture. “Humans find technological solutions to problems,” Ben-Dor says.

This trend continued, the researchers argue, until prey was so small that it forced a drastic change in the kind of food humans relied on. The extinction or near disappearance of large animals and the calories they offered may have been the driving force behind the agricultural revolution and animal domestication, Ben-Dor and Barkai believe. The largest animals found in deposits dating to the last few thousand years were about 30 kilograms or less, the researchers say — smaller creatures like mountain gazelles.

“You cannot allow yourself to run all over the place when the animals become scarcer and scarcer, and become smaller and smaller,” Ben-Dor says. “The decline in prey animals led people to realize that they have no other choice but to domesticate animals to make a living.”