From the passenger pigeon to the woolly mammoth, a variety of techniques could potentially resurrect lost species, whether completely extinct or merely extirpated from the wild. 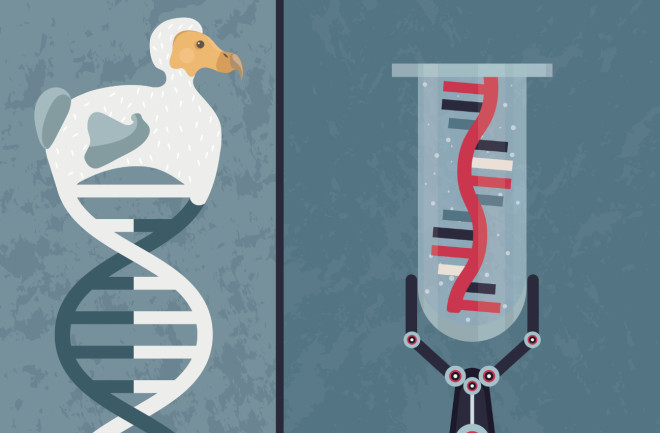 This article was originally published on Sept. 9, 2022.

Extinction has a pretty clear definition: gone forever. Or does it?

New advances using gene-editing tools like CRISPR or targeted breeding are rapidly leading researchers to think about bringing back certain species — the passenger pigeon, Tasmanian tiger and woolly mammoth, for example — from extinction. But these projects are controversial for a number of reasons. On the extreme end is the "Jurassic Park” argument; should we really reintroduce animals that evolved and subsequently went extinct eons ago into a world completely alien to them?

Despite what the dinosaur movies depict, however, we don’t yet have the technology to bring back something from scratch (even if we did have the complete genome of an ancient species). “There are severe limitations to just how far we can take this technology today,” says Ben Novak, lead scientist of Revive & Restore, a nonprofit that harnesses biotechnologies to resurrect extinct species and save endangered ones.

In other cases, biologists are working with species that were merely extirpated from specific locales — you see, the concept of extinction isn’t always as clear-cut as it may seem. Did aurochs go extinct when humans domesticated them into modern cows, for example, or did the creatures simply change?

Florida panthers, on the other hand, never quite went extinct; but to bolster the genetic diversity of the dangerously few big cats that remained in the state, wildlife managers introduced cougars from a separate population in Texas. The panther numbers increased as a result, yet the cats that live there are now genetically different from the original panther population.

Below, explore a few examples of the species that researchers have attempted to bring back from extinction.

The Pyrenean ibex is possibly the only extinct animal that has successfully been brought back to life — though it only lasted for a few minutes. The last of the animals died out in 2000, but three years later scientists used its frozen cells to clone a calf. While the clone survived birth, it died a few minutes later due to lung defects, giving the subspecies of ibex the distinction of having gone extinct twice. (Novak, for the record, says that this popular statement isn’t quite true because a single female doesn’t constitute a species. “It technically was never revived,” he says.)

The de-extinction of passenger pigeons and heath hens are the two projects that Revive & Restore is actively working on. The passenger pigeon program started in 2012 and involves learning how to use CRISPR to edit genes of band-tailed pigeons, a close living genetic cousin of the passenger pigeons that died out in the beginning of the 20th century. The closest living relative of the heath hen, which went extinct in the 1930s, is the greater prairie chicken.

Unfortunately, because birds lay eggs, scientists can’t rely on in vitro fertilization with them the same way they can with mammals. Researchers have made advances growing reproductive cells in petri dishes for domestic chickens, which might help us understand more. But Novak says the recipe to keep chicken cells alive doesn’t work for the cells of these two wild birds. Of these species, heath hens may be a little easier to eventually restore, Novak says, as they are genetically closer to their living cousins than passenger pigeons are to theirs.

One trouble with reviving extinct creatures is that scientists must first obtain a complete genome. Researchers have actively been gathering mammoth DNA from museum samples — and have more than 90 percent of its genome mapped, Novak says. But most of the genetic material that organisms carry is so-called “junk DNA” that may not be completely necessary for the functioning or uniqueness of a species. The trick is finding which DNA matters.

While the Asian elephant is the closest living relative of the woolly mammoth, the current plan of the company Colossal involves using an artificial uterus to give birth to a calf rather than using a surrogate elephant mother. The use of a surrogate, it says, would be extremely complicated due to the two-year term of elephant pregnancy. Novak adds that gene-editing technology isn’t yet ready to make the revival of mammoths and other extinct species realistic; CRISPR can only edit a few dozen mutations per generation, while the mammoth has about 1 million genes that differ from Asian elephants.

Humans captured the last known wild Tasmanian tiger, or thylacine, in 1930. Now, the University of Melbourne is heading a project to bring back the animal, one of Australia’s most storied extinct predators, and recently got a big money boost from Colossal. The project also involves gene editing — in this case, from the closest living relative of the tigers, the numbat.

Rather than gene editing, the work to recreate the wild version of our own domesticized cows involves reversing the centuries of work that humans did to achieve a steady supply of milk and T-bone steaks. This entails selective breeding of cows to get the species back to some semblance of what their ancestors may have looked like. The Auerrind Project, part of Rewilding Europe, is currently working on the science behind this, as well as learning more about natural grazing in Germany. “Since it began in 2013, the Auerrind Project has established four breeding herds in Lorsch, Einhausen, Bielefeld and Schwarzach, with bovine grazing on more than 50 hectares of land,” its website states.

The largest land bird in North America went extinct in the wild in the 1980s, when zoos took the remaining birds into captivity. Before this, biologists had to learn how to raise these giant birds in captivity without potentially harming the few that were left. They experimented on captive raising of Andean condors — close cousins of the California species — until developing a system of raising chicks and releasing them in the wild.

Captive breeding programs for the California condors ensued, including at places like the condor sanctuary in Big Sur, California, operated by the Ventana Wildlife Society. The society releases birds every year; according to one survey, there were an estimated 334 in the wild in 2021. But challenges remain due to lead poisoning from ammunition. Recently, the Dolan blaze destroyed condor release facilities and killed several wild birds and chicks that could not escape the flames.