Return of the Aurochs

Using cave paintings and skeletons, scientists are resurrecting the first recorded animal to have gone extinct. 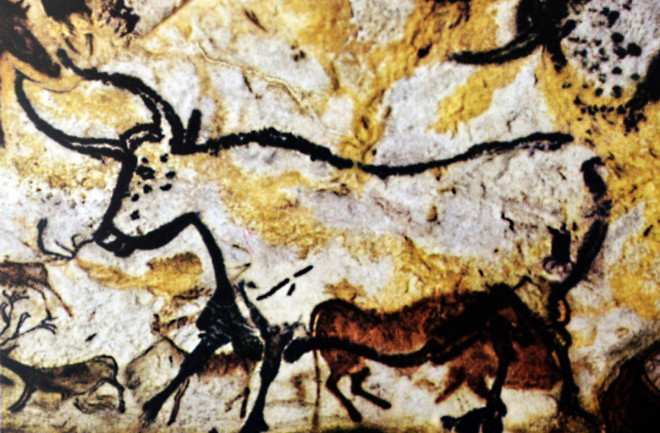 At the Lascaux Cave in France, a large bull was drawn over earlier paintings of wild cattle more than 10,000 years ago. Scientists are using ancient depictions like these to re-create the animals. (Credit: Universal History Archive/UIG via Getty Images)

Inscribed on rocks along the riverbanks in Portugal’s Côa Valley are figures of wild horses and aurochs — the common ancestor to all domestic cattle breeds — drawn by Paleolithic hunters tens of thousands of years ago. Archaeologists scrambled to protect these petroglyphs in the 1990s, as the Portuguese government planned to flood the valley behind a giant dam. Within four years, Côa was listed as a United Nations World Heritage Site, ensuring that this record of prehistoric megafauna would survive. All that was missing was the wildlife itself.

Ronald Goderie intends to fill that void. A cattle breeder trained in ecology, he’s working to reintroduce aurochs to the Côa Valley. The problem is that the aurochs, Bos primigenius, has been extinct since 1627.

Goderie isn’t concerned. To revive the aurochs, he’s collaborating with geneticists at Wageningen University and ecologists at a non-governmental organization called Rewilding Europe. Together they’re “back-breeding” modern cattle to take on aurochs-like traits — like menacing horns and stripes along their backs — and then introducing herds of these doppelganger herbivores into landscapes where aurochs once roamed.

The project may seem whimsical, but there are serious ecological reasons for bringing aurochs back onto the scene. “Agricultural land is being abandoned on a large scale in Europe, and natural grazing is one of the key processes for preserving biodiversity,” says Goderie. “We’re trying to re-establish a wild bovine that can do the job. To be able to do this as well as possible, we think these cattle should resemble the aurochs as much as possible.”

Goderie and his collaborators are not alone in their belief that wild grazing is necessary, and that the job calls for an animal akin to the aurochs. As Goderie releases his first 40 animals in the Côa Valley, other breeders are raising back-bred herds. For instance, a conservation organization called Arbeitsgemeinschaft Biologischer Umweltschutz (ABU) has more than 100 of their own faux aurochs grazing in various nature reserves in northwest Germany.

Extinction aside, the aurochs appears to be thriving.

The petroglyphs of the Côa Valley are just one of many traces of ancient aurochs. The animals appear in the famous cave art of Chauvet-Pont d’Arc, where they were painted 30,000 years ago, depicted with hulking muscles and great twisting horns. Encountering some aurochs during the Gallic Wars, Julius Caesar was awed. “In size these are little but inferior to elephants,” he proclaimed. “They spare neither men nor beast.”

Yet the combined power of men and their beasts ultimately proved unbeatable. The spread of agriculture foreclosed the natural habitat of aurochs, which once covered most of Europe, Asia and northern Africa. By the early 17th century, the final holdouts survived in the Jaktorów Forest of Poland, protected by noblemen who also liked to hunt them. The death of the last aurochs in 1627 was also the world’s first recorded extinction.

After their demise, aurochs only grew in stature. They came to embody a primeval ideal, and there was a longing to revive them.

The Heck brothers, Heinz and Lutz, were German zookeepers who re-created their own version of aurochs in pursuit of an Aryan supercattle. (Credit: Barry Batchelor/Press Association/AP Images)

The first to try were a couple of German zookeepers, brothers named Heinz and Lutz Heck, who managed the zoos of Berlin and Munich in the 1930s. “They had in mind the idea of creating Aryan supercattle,” says Goderie. They crossed some of the most primitive and aggressive breeds (including Spanish fighting bulls), attaining a superficial resemblance to old depictions of aurochs. Few scientists took their efforts seriously. But the Heck cattle excited Nazi Reichsmarschall Hermann Göring, who supposedly set some loose on his estate for pleasure hunting.

Large swaths of land are no longer being cultivated. And that’s a problem, says Helmer, because ungrazed land will rapidly grow forested, crowding out wildflowers and butterflies. “Large herbivores have shaped the European landscape,” he says. “For a million years, they did so in a natural context, and for the past 10,000 years, they did so as livestock.” With their voracious appetites and propensity to trample everything around them, wild and domesticated bovines maintained an ever-shifting mosaic of ecosystems ranging from deep forest to open prairie. The removal of domestic cattle and lack of wild alternatives could result, by Helmer’s reckoning, in a loss of half the landscape’s biodiversity.

The timing of Goderie’s quest was auspicious. Researchers were sequencing mitochondrial DNA from aurochs remains (and would successfully sequence the first nuclear genome in 2015). Teaming up with Wageningen University molecular geneticist Richard Crooijmans, Goderie surveyed how different primitive cattle breeds were related to the aurochs in order to decide which animals to mix.

They started with six different types of cattle from three regions of Europe. “You have to start with many breeds because most of them are highly inbred,” explains Crooijmans. “Without variation, you can’t select.” And since the goal is to breed animals for their ability to thrive in the wild, selection of aurochs-like traits (or phenotypes) has been their initial focus.

They deduce those traits from cave paintings and ancient skeletons. Some, like menacing horns, have obvious advantages for animals living in the wild. Other characteristics, such as stripes down the back, are not obviously important but might be genetically related to traits that prove significant. And all of the characteristics must be considered in terms of their potential risk to humans. (That’s why Spanish fighting bulls aren’t on the menu.)

Even with Crooijmans’ expertise, the breeding process is excruciatingly slow. Each generation requires a couple of years before traits mature, and he can’t yet select characteristics just by looking at the genes. “Commercially interesting traits like milk yield have been very well studied, but primitive traits like horn shape have not,” he says. “What we want is to get a grip on those primitive phenotypes based on genome sequences. Then we can go much faster.”

To preserve open terrain in nature reserves, organizations such as Rewilding Europe often enlist domesticated herds. In 2008, cattle breeder Goderie was providing that service in the Netherlands — grazing parks with Scottish Highland cattle — when he began thinking about more suitable breeds. “In one of the nature areas near ours, there was the idea of starting with Heck cattle,” he recalls. Concerned about their aggressiveness, he resolved to start over, seeking an animal as well adapted to the land as aurochs were in their time. Borrowing the Greek word for “bull,” he dubbed his creature the tauros.

The last aurochs died in 1627 in the world’s first recorded extinction. Scientists now use ancient art and skeletons to determine traits like menacing horns and stripes, as shown in this 17th-century woodcut. (Credit: Paul D. Stewart/Science Source)

Goderie now has about 500 animals at various stages of becoming modern-day aurochs. They live everywhere from the Côa Valley to the Velebit mountains in Croatia — often side by side with horses that other Rewilding Europe affiliates have back-bred for primitive traits. Some tauros cattle already have eel stripes and horns that would impress Caesar (though he might be mystified by the ear tags, which are required by law because the animals are technically still domesticated).

Given the demands of rewilding, even Heck cattle are gaining new respect. “Heck cattle contain several interesting breeds that do not exist anymore,” notes Margret Bunzel-Drüke, a zoologist working at ABU. The genetic traits of those lost breeds may turn out to be important, especially as animals spread across the continent and contend with different climates. ABU has taken up where the Heck brothers left off, crossbreeding Hecks with other cattle to make them less belligerent and more like aurochs.

“Each different rewilding area poses different problems,” Goderie acknowledges. “I think having only one strategy might be risky.”

On the verge of reclaiming Bos primigenius from extinction, the makers of modern aurochs aren’t taking any chances.

Jonathon Keats is a contributing editor for Discover. This story originally appeared in print as "Return of the Aurochs."