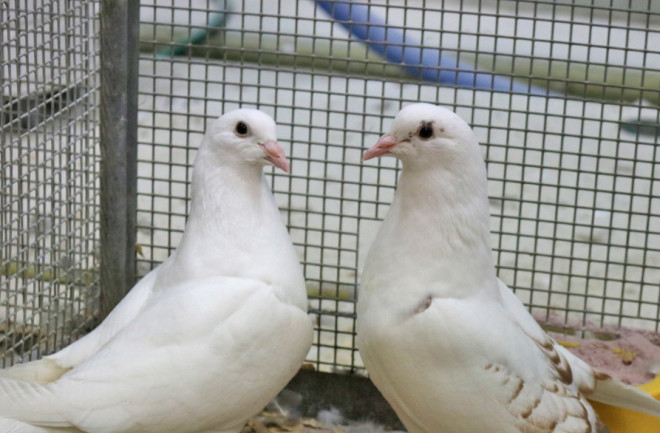 Scientists are trying to "de-extinct" the passenger pigeon by modifying the genes of more common pigeons. These birds have been altered so their offspring will be easier to edit with CRISPR. (Credit: Ben Novak)

Ben Novak’s pigeons aren’t much to look at. Cosmetically, they’re not too different from the scavengers you’d see on any city street.

But dive down to the cellular level, and you’ll find something very unusual: they’ve been bred for easier DNA editing. These birds are a step on the way to bringing back an extinct species.

Novak, lead scientist at Revive & Restore, a California-based group that aims to help endangered and even extinct species through what they call “genetic rescue.”

The group is part of the so-called de-extinction movement trying bring back extinct creatures and reintroduce them to their previous habitat. Much of the hype has been about wooly mammoths, but Novak and his colleagues are starting much, much smaller. They’re using gene editing to try and resurrect the passenger pigeon.

You may have heard of CRISPR — short for Clustered Regularly Interspaced Short Palindromic Repeats. It’s a cheap and easy gene editing method. It takes a gene present in bacteria and other microorganisms and uses it to sneak in gene strands that weren’t in your body before.

Unlike many other animals, pigeons don’t have the right length of DNA to easily send in genes using CRISPR, so they had to insert a new gene first. This now let’s them edit the DNA of these pigeons, giving the birds new traits they never previously possessed. Novak now hopes they can discover what makes the pigeon tick on a genetic level.

“Any project that is going to use genomic editing in an organism really isn’t going to know how it’s going to play out,” Ben Novak, lead scientist at Revive & Restore, says.

So why is he going through all this trouble?

Novak and his colleagues want to incorporate new genes into their pigeons and hope those animals pass on the newly incorporated genes to their offspring. After enough generations, they hope those pigeons will be nearly identical to the passenger pigeon on a genetic level.

So instead, Novak is working with the sorts of pigeons you see in parks.

But that doesn’t make them easy to work with.

“Pigeons when they hatch, they are blind, they are helpless, they can’t regulate their body temperature,” Novak says. “They have to be raised by their parents.”

Baby chickens aren’t like that — you can raise a chicken in an incubator and hand feed it without any need for its parents. But 90 percent of birds are more like pigeons and need intensive care. Breeding each generation requires tight knit family units so the pigeons survive to maturity.

There are plenty of critiques lobbied at the idea of resurrecting extinct species.

Stanford geneticists Anne and Paul Ehrlich wrote a recent counterpoint on it for Yale Environment 360. Among the points they make: It won’t be a true passenger pigeon, but a pigeon engineered to have lots of traits of the passenger pigeon. And they say the resources are better spent saving currently critically endangered species. That’s because you need a vast number of passenger pigeons to have a sustainable population is vast—over one million — because they’re bad at evading predators. Reintroduction efforts won’t always take.

But Stewart Brand, the Whole Earth Catalog founder who co-started Revive & Restore, fires back that it’s essential for protecting precious ecosystems. The technology could be used to splice genes of closely related species so that they can produce viable offspring and prevent endangered species inbreeding. The improvements in biodiversity will make the world a better place, he says.

Yet funding for Revive & Restore has come in fits and starts, showing that the project still hasn’t gained wide acceptance in the community. Right now, their work often piggybacks on other grant funding. Novak and his team work on other projects relevant to their research, and make incremental steps toward their own goals in the process.

“De-extinction is not something that’s really financially backed in any way at this time,” he says.

But for now, Revive & Restore needs to see if it can bring the pigeon back — then reintroduce it to its habitat. There will be even more unknowns ahead, but if it all pans out, extinction could be a thing of the past.