Despite logistical and ethical hurdles, the ability to create genetic replicas could aid medical research and possibly save animals from extinction. 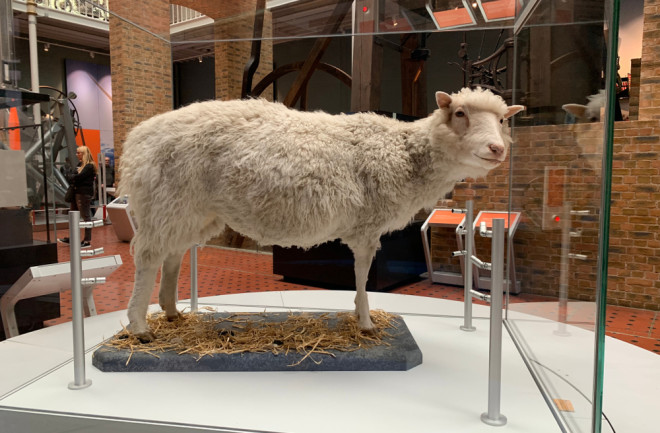 A taxidermy of the sheep clone Dolly on display at the National Museum of Scotland. (Credit: Jordan Grinnell/Shutterstock)

In 1996, one of the most famous instances of cloning occurred when Dolly was made from the udder cell of a 6-year-old sheep. But what exactly is cloning? It’s broadly defined as “the creation of an exact genetic replica of a small segment of DNA, a cell or a whole organism.” However, the resulting creature isn’t always a carbon copy of its source. The genetic outcome depends on the specific method employed. Scientists conduct three different types of cloning:

In a method perhaps less exciting than that which led to Dolly’s conception, gene or molecular cloning creates copies of genes or DNA segments. It’s often used to study particular genes in a lab.

In this case, scientists take a specific DNA segment and place it in the self-replicating genetic material called plasmid DNA within a bacterial cell. They then put the resulting recombinant (combined human and bacterial) DNA into a host. Examples of hosts include bacteria, yeast and mammal cells. This method ensures that scientists can work with multiple copies of the specific gene of interest.

Gene cloning has allowed labs to develop vaccines and antigen tests, among other breakthroughs. Scientists can also identify a helpful trait and utilize it in the genetic modification of seeds, such as a particular plant’s natural pest-resistant gene.

This technique creates a genetic copy of an animal. Besides Dolly, scientists have so far cloned a cat, horse, deer, rabbit, ox and monkey, to name a few.

It’s typically accomplished via somatic cell nuclear transfer (SCNT). Before SCNT progressed significantly in the 1980s and ‘90s, cloning was usually performed through embryo splitting. This method begins by dividing an early-stage multicellular embryo to make two “half-embryos.” These are implanted into the uterus of a surrogate mother who doesn’t share genetic material with the original embryos. It mirrors how monozygotic twins naturally form in the womb.

In the SCNT approach, researchers use an electrical current to fuse an adult somatic (non-reproductive or sperm) cell with an egg that has had its nucleus removed, triggering fertilization and cell division. The transformed egg is then placed in a test tube, where it grows into an embryo. Finally, this embryo is implanted into the womb of a female animal.

Reproductive cloning doesn’t always result in an exact duplicate: For example, Dolly, who was created via SCNT, was constructed from an egg donated by a black-faced sheep and chromosomal DNA from a white-faced sheep’s mammary gland (which is why she was playfully named after Dolly Parton). So you couldn’t necessarily call her a true white-faced sheep, since she’s got a bit of black-faced sheep in her — in the form of mitochondrial DNA, which doesn’t live in the nucleus.

Overall, animal cloning has been acknowledged as inefficient because the resulting embryos usually can’t lead healthy lives. Out of 277 cloned sheep embryos within the experiment at the University of Edinburgh’s Roslin Institute, Dolly was the only one who was born alive. And as they grow, clones can experience organ defects, premature aging, and immune system issues. Dolly only reached approximately half of the normal sheep’s average lifespan because, due to the cloning process, she received mature chromosomes from an adult organism that are shorter than a typical embryo’s. This speeds up cell death within an animal and limits their lifetime.

Stem cells, which are unspecialized and can renew themselves through cell division, are derived from a cloned embryo. When differentiated or transformed into specific cell types, they can be used to test new drugs. Labs also aim to transplant patients with tissue generated from their own cloned cells in order to avoid rejection. For example, someone with type 1 diabetes could benefit from replacement pancreatic cells that produce insulin.

The Surprising Benefits of Copying Animals

Reproductive cloning can also contribute to important medical advances. As for drug testing, it could allow researchers to work with several animals with the exact same genetic makeup. Labs could also create copies of genetically modified animals that make milk with a protein that enables blood clotting in humans. In 2009, the FDA approved the drug ATryn, which was made possible by cloning goats, for the prevention of thrombosis.

Cloning could also help bring species back from extinction. This past February, scientists announced they had successfully cloned the first endangered species that’s native to North America — a black-footed ferret. They worked with the frozen remains of a ferret preserved in 1988, when DNA technology was in its earlier stages. Cloning could even rescue completely vanished species, but this requires living cell samples that aren’t usually available for long-gone animals like mammoths. That's why advocates of mammoth de-extinction are instead looking into genetic engineering (via a woolly mammoth-Asian elephant hybrid).

Can We Clone Humans?

Besides the ethical objections regarding copying Homo sapiens, the process also presents a logistical challenge. We primates have spindle proteins, which are crucial for cell division, located near the chromosomes in our unfertilized eggs. When the nucleus is removed from the egg during the cloning process, the spindle proteins are also extracted. This messes with the cloned organism’s growth. Also, ultraviolet light and some dyes involved in nucleus removal from the egg could prevent the primate cell from growing. While some groups have declared they successfully multiplied humans, the issue with spindle proteins renders the results of their experiments dubious.