Researchers suggest humans and Neanderthals communicated, and even introduced tools to one another. 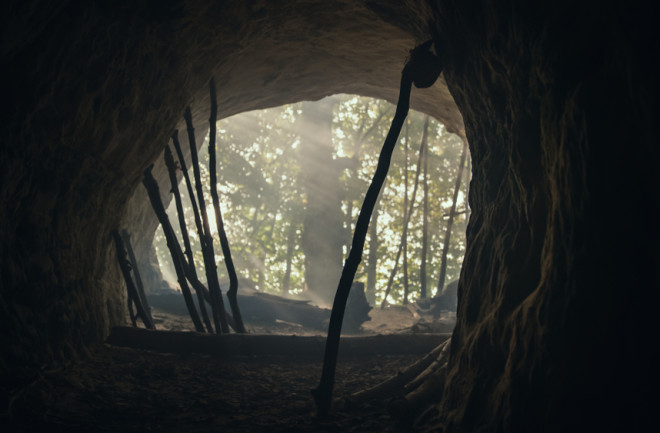 Deep in southern France, near the small town of Malataverne, is a limestone cave called Grotte Mandrin. And it has housed Neanderthal and human history for over 100,000 years. As more of a shelter, the cave withstood the hands of time because of its location. The mistral — a famous French northwesterly wind that blows in each winter from the Gulf of Lion — has covered the cave with layers of dust, frozen in time to preserve what lies beneath.

It’s also the place where Neanderthals and humans came together in Europe, says Ludovic Slimak, an archaeologist and director of the Grotte Mandrin project. Archaeological layers hidden beneath the cave show us that around 50,000 years ago, humans made their first incursion into the cave.

Twelve layers of archeological deposits show the inhabitants of the cave were both Neanderthal and human, according to a recent study published in the journal Science Advances. Researchers distinguished the Neanderthal and human remains from each other using the structural morphology of their teeth. And they uncovered the exact timing of human incursion based on soot from the roof of the cave.

“Using innovative technology, we were able to distinguish when the last Neanderthal and the first human fires were built in the cave,” says Slimak.

Researchers studied the “parietal concretions of the Grotte Mandrin site,” or traces of soot that collect on the roof of the cave after fires, to see that Neanderthals and humans lived in the cave within a year of each other. Slimak says that over time, a thin limestone crust covered the soot. As condensation and water run-off inside cracks of the cave formed, the crust froze, and fell to the ground in small portions of limestone deposits.

“Thousands of fragments of soot fell into the archaeological layers of the cave. Under a microscope, they makeup tiny layers, which form ‘a bar code,’” says Slimak.

Each time period has a unique thickness in the barcode, allowing archeologists to learn when each fire occurred. It’s the same way researchers can drill into a tree and obtain its date using the tree’s rings. They can also use the unique layers of soot to date human and Neanderthal inhabitation. Slimak says his team used the same computer software that a dendrologist would use to study the age of a tree.

“We were able to show that there were 500 different phases of occupation in the cave,” says Slimak.

How Much Did Humans and Neanderthals Interact?

Slimak says that there are two indications showing that humans and Neanderthals likely had some interaction. First, the time between the last Neanderthals and the first humans in the cave was short. And it seems unlikely that humans slid in and out of the cave without meeting Neanderthals.

Second, Slimak and his team uncovered the territory of Neanderthals based on where they sourced their flints — rock pieces used in weapon and tool making. Neanderthals had already lived in the area for millennia and knew where everything was. Some flints came from the Alps, others from Provence and still others from the western side of the Rhone River, Slimak says.

Humans only inhabited the cave for 40 years, or one human lifetime. It seems unlikely they would have known all the information that the Neanderthals knew without some sort of interaction. Neanderthals likely provided information about the territory to humans who had come from elsewhere.

“This is a very large territory and the inhabitants had precise knowledge of all its resources,” says Slimak. “In 40 years, you can’t know the resources of a territory this large that represents several thousand square kilometers.”

This is one of the main reasons why Slimak thinks Neanderthals and humans did often communicate. At the same time, humans introduced tools to Neanderthals. They brought bows and arrows that hadn’t been used outside of Africa and the Levant in the Middle East, says Slimak. Neanderthals previously used much more primitive spears for hunting.

We know that Neanderthals and humans shared a cave. They hunted, they gathered, they shared information and then suddenly, Neanderthals in the Grotte Mandrin were gone. They built their last fires and disappeared. The reason behind their demise has long eluded archaeologists. And Slimak has spent his career exploring the subject. He says that it was most likely “something big and something sudden.” But we still don’t know why because whatever the reason, Neanderthals didn’t live to tell the tale.