Everyone Has Neanderthal DNA in Their Genome, New Genetic Analysis Shows

A new kind of DNA analysis suggests that ancient humans came back to Africa and spread Neanderthal DNA around. 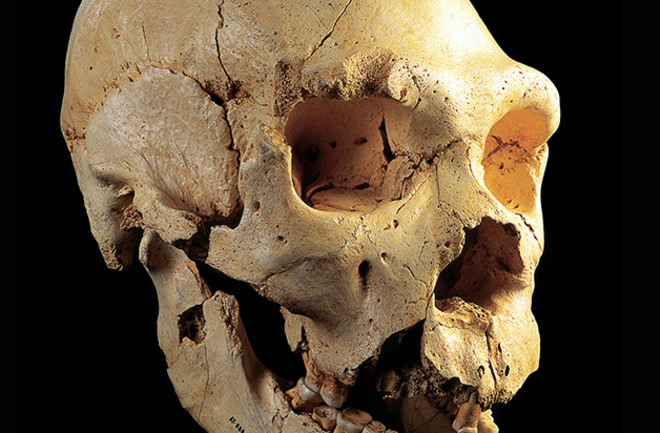 Starting about 200,000 years ago, humans began moving out of Africa. As the current theory goes, they never looked back. Those who reached Europe mated with Neanderthals, human relatives residing on the continent. Echoes of this tryst show up today in the genomes of those of European and Asian descent — those populations are a few percent Neanderthal by DNA. It also explains why Africans were thought to have little to no Neanderthal DNA, as their ancestors never met the lineage.

But new research suggests the world travels of early humans didn’t play out this neatly. Using their own DNA analysis method, a team of geneticists found that humans with European ancestry have a higher percentage of Neanderthal DNA in their genome than previously thought. And, more surprisingly, modern humans with African ancestry had about 17 times as much Neanderthal DNA than earlier tests revealed. The results were published in the journal Cell.

But how did Africans get that Neanderthal DNA if they never left the continent and Neanderthals, as far as we know, never ventured that far south? According to the new data, those genes were carried by ancient Homo sapiens from Europe who made a U-turn and came back to Africa, bringing some of the Neanderthal genome with them.

If correct, this insight adds more nuance to the story of human expansion and dispersal. “It’s sort of clarifying and making more complex the history of migration in that region,” says Aaron Wolf, a study co-author and geneticist at Princeton University and the University of Washington.

For a long time, researchers assumed that Neanderthal DNA appeared in the genomes of modern African populations because the two shared a common ancestor 500,000 years ago — not necessarily because their relatives had kids with each other, Wolf says. Even if researchers suspected the two populations did have some genetic overlap, other DNA tests operated on the theory that they never did.

So Wolf and his colleagues designed a system that left the possibility open. The technique, called IBDmix, combs through the genome of a modern person and that of an ancient human (or Neanderthal) and calculates the likelihood that pieces of DNA match because they were inherited from the same ancient relative. The team compared over 2,500 modern genomes to a Neanderthal DNA dataset.

Older estimates suggested that modern African populations have about one megabase — or 1 million DNA building blocks — from Neanderthals in their genomes. Wolf and his team’s analysis estimates these genomes actually carry 17 megabases of Neanderthal DNA, or 17 million DNA base pairs. That’s still only 3 percent of the overall genome, but it was a shocking result, Wolf says, far higher than previous estimates. “It made us go back and recheck the data a lot.”

Some of the newly identified Neanderthal DNA in modern African groups matched the Neanderthal fragments in modern European humans. To Wolf and his team, this suggests that our older relatives came back to Africa with newly acquired Neanderthal in their genome and shared it with populations still living in the region.

The analysis also found higher levels of Neanderthal DNA in those of European descent than previous studies. By Wolf's analysis, Europeans have as much Neanderthal DNA as do modern Asian populations — about 50 megabases. It's an indication that ancient humans met up with Neanderthals before they split off into different lineages in various geographic areas.

Wolf and his colleagues want to dive deeper into the African dataset. The few geographic regions that the modern-day samples came from all showed remarkably similar rates of Neanderthal DNA, so the team would like to assess more samples to see if any human subpopulations have more or less than what’s been found so far.

Even without that extra investigation, the team thinks this data show that our tangos with extinct human lineages were more nuanced than scientists generally believe. “We’re finding Neanderthal ancestry in almost all the populations we’ve studied to date,” says Wolf.

And the more we learn about how Neanderthals behaved and how often our ancestors interacted with them, the more they remind us of ourselves.