A new book explores the science behind our most versatile sense. 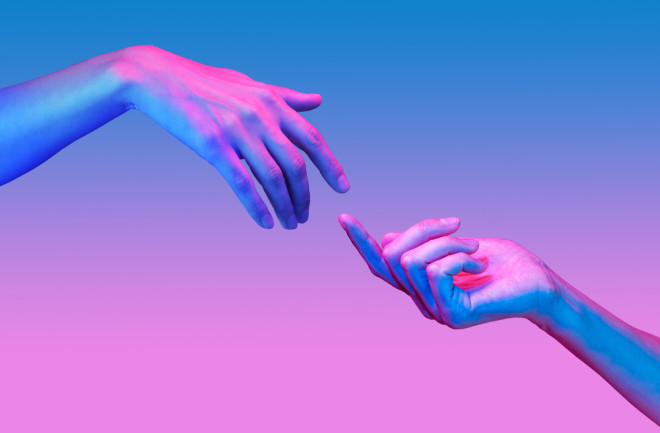 Several years ago, Sushma Subramanian was procrastinating on her work when she noticed her desk was a bit wobbly. It was a rather mundane moment, she recalls, and one that’s only a vague memory now. But as she began to fiddle with the shaky tabletop, the science journalist found herself noting how the experience felt: the grain of the wood against her fingers, the pinching of her skin and the sensation of her muscles straining to lift the desk.

As Subramanian explains in her book, How to Feel: The Science and Meaning of Touch, it was a moment when she began to consider how little she knew about this multifaceted sense — “a capacity,” she writes, “that never shuts off.” The questions kept forming, eventually leading Subramanian, a professor of journalism at the University of Mary Washington, to write an article for Discover in 2015 about the development of tactile touch screens — which use haptic technology, such as vibrations in handheld devices.

In her latest work, she dives deeper into that world, but also explores the limits of our sense of touch and what makes it so versatile. Discover caught up with Subramanian to talk about touch in the age of COVID-19, the future of tactile research and how we experience the sense differently across personal and cultural barriers.

Q. You talk in your book about how so many of us experience a need for touch. Do you feel that need has been under- or overstated in the context of isolation during the COVID-19 pandemic?

A. It's hard to say whether it's over- or understated. I think it depends on an individual person, and everybody has their own particular needs for touch. The interesting thing is, there's actually not that much research on what it means to be missing out on touch in the way that we are during the pandemic.

What people have studied is extreme circumstances, like in the case of Romanian orphanages 30 years ago, when there were these children who just didn't receive all of this sensory input that children normally do in their childhood. That had very dire consequences.

The one piece of research that was done during this pandemic that I know of was by Tiffany Field and her colleagues at the Touch Research Institute in Miami. They found that a lot of people, because of social isolation, do feel more touch-deprived. People who reported that they were touch-deprived also had other problems: more stress, depression, anxiety, fatigue and PTSD symptoms. So there seems to be a correlation there, but it's imperfect. This was done through a Facebook survey. And so we don't really know.

But even though we're experiencing social isolation, I think that we see the same variety of behaviors we had before the pandemic hit. There are people who are at home with their families who are experiencing more closeness with them. There are people who are living alone and even though they're not around people, they're experiencing touch in different ways. They're baking and kneading dough and knitting sweaters and doing all of these tactile things that they maybe normally wouldn't have time for. Even if they don't have other people, they're finding ways to compensate.

Q. I didn't consider that angle of people wanting to do more hands-on things during the pandemic. In my personal experience, I’ve been doing a lot of baking and crafts lately. So it seems that the hobbies a lot of people are picking up are more tactile.

A. I think that you also see historically that there's this connection between more and more time away from touch when we're on screens (a mostly visually-based environment) and all of these tactile trends popping up to compensate. So the more we're on screens, the more we see things like maker movements, professional cuddlers and yoga growing in popularity. I feel like, instinctually, people have this need for touch that is being expressed in these other ways.

Q. Something that’s really drawn me to your book is all the interesting people you met who experience touch in different ways, or hardly experience it at all. Are there any stories or people that you just can't stop thinking about?

A. I actually think that the experiences that were less extreme and more relatable were the ones that stuck with me. I remember hearing about this professional cuddler; she met with me and she told me this story where one of her clients was this guy who was just really wanting physical contact with a woman, but didn't know how to go about it. And so he hired her to help him practice.

He was in this setting where he didn't have to be so nervous about touching somebody. He didn't have to worry about what they were feeling and whether he would be rejected or any of those other things. He just let himself experience the enjoyment of touch with somebody who was hired to be there.

And it allowed him to let go of all of these feelings that he had about touch, related to all of the interpersonal challenges of dating and attachment and it helped him to eventually not need a cuddler and just be comfortable within himself. I think a lot about that story and also how many of us might describe ourselves as touch averse, but we might just not have the knowledge of how to go about getting the kind of touch we need.

Q. In the first chapter, you talk about your childhood, traveling between the U.S. and India, and the differences between how each culture treats touch and comfort. Are there any other differences in touch that you've noticed when traveling as an adult?

A. Oh yeah. So I went to Brazil two summers ago to write a story. And I was really surprised because you're supposed to have this interpersonal distance when you're a journalist covering a subject, but everybody I interviewed there wanted to hug me when they met me. It's really hard to maintain that sense of objectivity and professionalism in that environment.

But since I was a kid, I haven't experienced another culture long term where I would be thrown off returning back to my home. But I do feel that certain countries have a real focus on physical comforts, warmth indoors or other things.

I went on this trip to Wales and people were used to wearing a lot of clothes even indoors, and that felt uncomfortable to me. I just had a different expectation of what was comfortable. So yeah, there are different tactile expectations, but what I started to notice in each of these cultures was how different each one made me feel. When I was in Brazil, when people were hugging me all the time, I felt warmer towards them, you know?

Q. I remember reading in your book that the U.S. can't really be defined as a high- or low-touch culture because there are so many different tactile traditions mixing from all over the world. Do you think there's any benefit to the fact that we don't really define ourselves as high- or low-touch?

A. I think there is a benefit to it because it gets us to talk about it more. There's always a benefit to not assuming what other people want or what they're comfortable with. Opening up a dialogue about it can help us to explain all of these other things that are related to touch, like, how much connection we want to other people and how much separateness.

Q. Yeah. That's interesting. Touch is something that I did not realize was so ingrained in culture.

A. It was also interesting to me that the scientists who study touch would talk about the importance of touch, but they were also in this profession that trains them to be objective. I would ask them about touch in their own lives and they would have a hard time answering that question.

Q. So, is there anything in that field of touch research that felt different than other areas of science that you've covered, or just the way that the scientists approach their work?

A. In terms of the differences between that and other fields, it's a similar approach. But I would say there are some limitations to how you can study the emotional impacts of touch that I noticed affecting research in really important ways.

For example, I was touring Nestle because they do touch research, especially in its relation to mouthfeel. And historically, the way that research was done was using robots to imitate a human mouth to see what happened to food and how its texture was processed. The problem is that there's really no robot that can imitate the way that we chew sideways and circular and move the food around in our mouth, and saliva is added along the way and affects the food as we're eating it. So now, more and more they're relying on humans to report how food feels.

But the thing is, they're looking for these objective measures, right? I feel like there's really not enough just about people self-reporting their own experiences with touch.

Q. Is there anything specific that you wish people understood about touch that they probably don't know now?

A. Well, this goes back to when I started thinking about it; you know what your senses are, but do you really? And so I think what I would like them to understand is what they don't know, and haven't thought about. Even in different scientific fields, the sense of touch is defined differently based on the aspects of it that these different fields are studying — does it have to do with particular types of receptors in the skin or does it have to do with a wider physical or emotional experience? The way you define that is based on the way you want to study it.

Scientists even disagree on what the sense of touch is. We understand it culturally, and what we incorporate into it is a lot of things that have to do with our skin, feelings deeper in our body and movements; all of these different elements. Thinking about that and considering what the sense of touch is, is just a really interesting exercise for anybody to go through.

This interview has been edited for length and clarity.