Rubbery Computer Screens Can Be Bent, Folded, and Even Crumpled 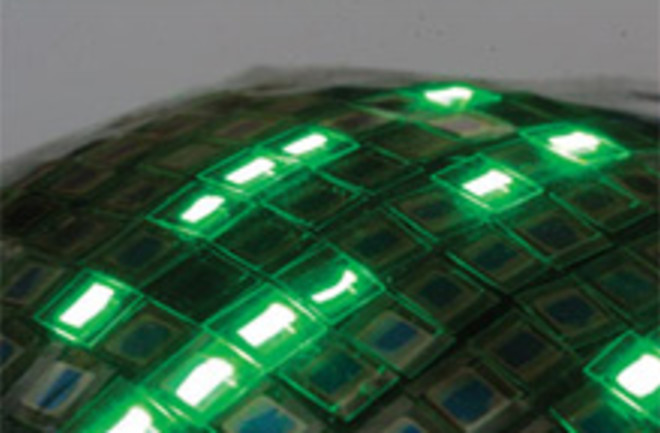 Would you like to wear your Facebook profile on the sleeve of your T-shirt? Or maybe the artists Christo and Jeanne-Claude would like to wrap a building in computer screens? Such marvels may one day be possible due to a stretchy display researchers created by connecting organic light-emitting diodes to a new rubbery conductor. Researchers say the display is remarkably durable--they bent it, folded it in half, and even crumpled it up without affecting its performance. What's more, the display,

which is thinner and less power-hungry than equivalent plasma and LCD screens, is produced through a cheap industrial printing process [Fast Company].

Organic light-emitting diodes (OLEDs) are not yet familiar technology, but many researchers think they'll play an important part in the next generation of electronics. The organic compounds in an OLED system emit light when an electric current is passed through them and need no backlight, which means they draw less power and can be thinner than a typical liquid crystal display (LCD) screen. But the real breakthrough in the current research is in the stretchy conductor underlying the OLEDs. The research group, led by Takao Someya, had previously demonstrated another version of the the stretchy conductor, which is made of carbon nanotubes and rubber. But researchers say that the new and improved version, described in a paper in Nature Materials, is much more conductive and can stretch to twice its original size.

Bendy, flexible electronics that can be rolled up like paper are already available. But rubber-like stretchable electronics offer the additional advantage that they can cover complex three-dimensional objects. "With a sheet of paper, you can wrap a cylinder or a cone, but that's pretty much it," says John Rogers, a professor of materials science and engineering.... "You can't wrap a body part, a sphere, or an airplane wing" [Technology Review].

The researchers can think of a host of applications, and say the conductor isn't limited to use in display screens: Engineers could also

use it to make sensitive artificial skin for robots or prosthetic limbs. Instead of using OLEDs, they would use pressure sensors on the printed conductor [Technology Review].