Materials capable of absorbing upwards of 99.9 percent of light could be useful in a variety of optical and space applications. 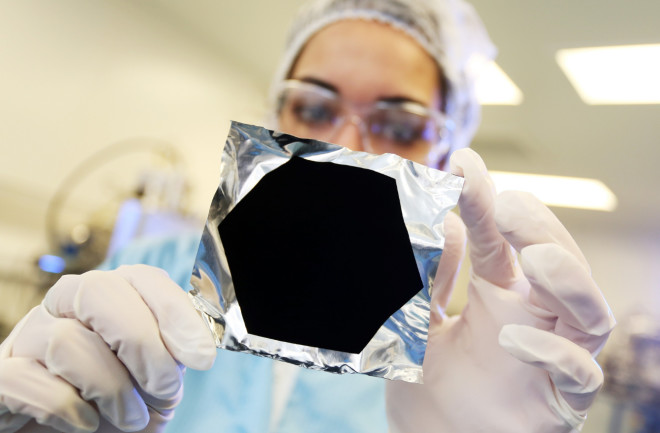 There’s black, and then there’s ultra-black: a blacker-than-black color that absorbs up to 99.9 percent of light. Some snake and deep-sea fish species evolved these ultra-black scales to camouflage their movement in dark environments, while peacock spiders and certain birds-of-paradise display the color in combination with more vibrant hues for eye-catching courtship rituals.

Dakota McCoy, a postdoctoral researcher in biophotonics at Stanford University, says that these biological adaptations — like how some birds-of-paradise use their light-absorbing feathers to convert particles called photons into thermal energy — can serve as inspiration for new technologies. “Engineers are very smart and they've made great devices, but nature has some cool tricks,” McCoy says. “We can look to these birds and these spiders and try to get inspiration for resilient, weather-resistant materials that can absorb light really well. For example, the [peacock] spider is being researched for fabricating new solar panel coatings.”

Indeed, scientists have been on the hunt for their own, improved, version of an ultra-black material for over a decade — but not for courtship rituals. Materials capable of absorbing upwards of 99.9 percent of light could increase the absorption of heat in solar power technology, or find use in military applications such as thermal camouflage. They’ve also been used in space, preventing stray light from entering telescopes and improving infrared sensors focused on Earth’s radiation budget. But just how black can these materials get?

Humans have used carbon blacks, pigments traditionally created by charring ivory, bones or grape vines and stems, since prehistoric times. Artists Rembrandt and Johannes Vermeer, among others, used carbon blacks in many famous paintings. And American astronomer Samuel Pierpont Langley crafted the first bolometer (an instrument that measures radiation from the sun via the rise in temperature of a blackened metal strip) in the 1870s using soot from a gas lamp.

Metal blacks, derived from gold, silver and nickel, came later on and are still used by scientists today. “[Gold black] is fluffy, for lack of a more sophisticated way to put it,” says John Lehman, a physicist at the National Institute of Standards and Technology (NIST) who began making detectors with gold black in the ‘80s. “It’s gold that you boil off in a low-pressure nitrogen environment and it's very analogous to snow falling on a sidewalk if you get the conditions just right.”

When snow falls on a warm sidewalk, it turns into a wet mess. But when snow finds itself on a cold sidewalk, it accumulates more easily — creating a “fluffy” structure akin to the super black feathers of birds-of-paradise. Photons rattle around the microstructures of metal blacks in much the same way, before ultimately being absorbed.

Around 2004, Lehman began investigating a new replacement for metal blacks: carbon nanotubes, cylinders of carbon atoms, or graphite. These tubes, at most 100 nanometers in diameter, are more than 1,000 times thinner than a human hair. “If a nanotube were a telephone pole, it would be a telephone pole a foot in diameter and three miles long,” Lehman says. To make them, scientists cook graphite with a metal, such as iron, in an oxygen-free furnace. As the graphite heats up, it settles into the ring-like template provided by the metal before building upward.

Carbon nanotubes are one of the strongest and stiffest materials discovered to date, but that’s not the only reason Lehman and other researchers turned to them in the search for the blackest black. They can also be grown lithographically, meaning researchers can place them exactly where they are needed and stop their growth when they reach a desired height. “In the past, gold black — pun intended — was kind of a black art,” Lehman says. “It's really hard to do, to get the ‘sidewalk’ temperature right and all those sort of things. ​​So we really feel like this is more of a science than an art.”

When arranged in a properly spaced “forest,” the carbon nanotubes become even blacker. Lehman and his colleagues at NIST grow low-density forests that contain about one billion nanotubes per square centimeter. That may sound like a lot, but it’s not. The tubes are very thin compared to the size of a photon — around 400 to 700 nanometers, just thin enough to trap photons rather than allowing them to immediately bounce away.

Various companies and institutions have developed their own versions of ultra-black materials using carbon nanotubes over the past few years. The efficiency of each depends on the final height, density and distribution of the nanotube forests. Vantablack®,created by British company Surrey NanoSystems, “holds the independently verified world record as the darkest man-made substance,” according to its website. This is also the ultra-black material that most people are familiar with, thanks to an all-out war sparked by artistic access to the pigment. Surrey’s version of the material is more like a map of nanotubes, rather than a forest, Lehman says. “They’ve managed to make this paint very low density and get rid of the binder so that it looks more like cotton candy.”

A more recent version came out of the Massachusetts Institute of Technology in 2019. In this case, researchers began with a metal template that was already a bit rough. When the nanotubes grew, they weren’t of uniform height — adding an extra dimension of roughness. The ultra-black material was unveiled in an art exhibit at the New York Stock Exchange, titled “The Redemption of Vanity,” and included a $2 million natural yellow diamond coated with carbon nanotubes until it appeared to human eyes to be a two-dimensional void.

Lehman says the arms race has no end in sight: “I started my career making black coatings and we’ve been doing this for over 15 years now. I think it's going to be continually a trade-off between how black you can make something and what the practical application is.” Despite claims, it remains up for debate which of the materials is truly the blackest black, he says. But one thing is clear: each absorbs a massive percentage of light (upwards of 99.9 percent) and isn’t limited to just visible light.

To Infrared… And Beyond

Carbon nanotubes absorb wavelengths of light even outside of the visible range, including the infrared and far infrared. This makes them useful in a variety of sensors and detectors — especially in space.

In 2018, the University of Colorado Boulder’s Laboratory for Atmospheric and Space Physics (LASP) launched a satellite, called the Compact Spectral Irradiance Monitor, to measure the brightness of the Sun. Designed with an optical absorber made of carbon nanotubes, it had a greater sensitivity and broader wavelength range than its predecessors. And LASP will soon team up with NASA for a nearly $130 million mission, known as Libera, to record how much energy enters and leaves our planet’s atmosphere on a day-by-day basis. That’s crucial information when it comes to how Earth’s climate is evolving over time.

“There's millions of dollars being spent, but at the end of the day it’s a tiny detector at the bottom of a telescope, with carbon nanotubes on it, telling us what the temperature is,” Lehman says. “That’s something I’m pretty darn excited about.”