Nanotubes Could Provide the Key to Flexible Electronics 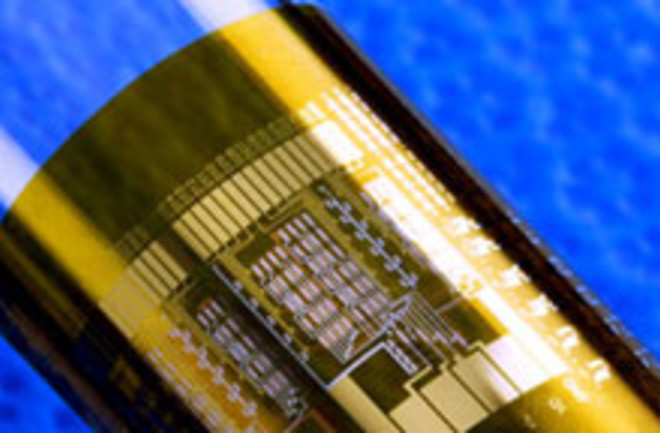 Researchers have used nets of carbon nanotubes to print electronic circuits on to thin, flexible sheets of plastic, in yet another example of nanotechnology's expanding possibilities.

The work is a major step towards the development of 'plastic electronics', where circuits on light, flexible surfaces could provide a range of products from paper-thin displays to intelligent food packaging and smart clothing [Chemistry World].

Everyone from entrepreneurs to the military is dreaming up applications for flexible electronics: They could be used to make a single-page electronic newspaper, for example, or could be formed into an electronic "skin" that covers an entire airplane, and checks the plane's surface for cracks. Since the typical silicon-based circuits are too rigid to use in such devices, researchers have been trying out new materials. The other major contender is semiconductors that use organic molecules, but those have been shown to have poor performance and reliability. In the new study, published in the journal Nature [subscription required], researchers made "nanonet" circuits

by depositing nanotubes onto plastic by standard printing methods, which could lead to low-cost, large-scale fabrication. And the printed circuits can bend to a radius of about five millimeters without compromising the electrical performance of the device. "This method is good for flexible electronics that need to be printed over a large area," says Ali Javey, an assistant professor of electrical engineering [MIT Technology Review].

As carbon nanotubes are natural semiconductors, researchers found that spraying on a random assortment of nanotubes produced transistors. The researchers then deposited insulators and interconnect materials on top of the nanotube network in order to create circuits, with the most complex example containing around 100 transistors. "The largest number of nanotube devices previously integrated together into one circuit has been about five," [lead researcher John] Rogers says. "On the other hand a modern microprocessor has 100 million. Basically we have taken a step forward and if we can do 100 there is a plausible argument we can do 100,000"

Image: University of Illinois at Urbana-Champaign