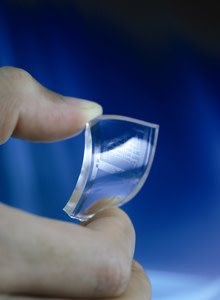 Thin, translucent sheets of graphene may one day allow electronic displays that can be folded and rolled up like a newspaper. Previously, the only way to make graphene—thin layers of carbon atoms that can conduct electricity at stunning speeds—was to use sticky tape to pull off thin films of graphite. Now researchers are developing a technique that can create flexible sheets of graphene on a commercially useful scale.

"Until now, everyone has been using our so-called 'pencil technique' (the sticky-tape method) but the disadvantage is that the graphite crystals are quite small—it's really painstaking research," [BBC News] said Andre Geim, who was the first to create graphene in 2004.

It was Geim who first proposed that graphene could be made more efficiently using a method called chemical vapor deposition. On that advice, South Korean researchers found a way to deposit graphene using CVD, which involves

evaporating a mixture of large carbon-containing molecules and firing it over a heated metal surface. The molecules break down, releasing carbon that re-organises on the surface in neat graphene sheets. The precise conditions of the experiment determine how many sheets are produced [BBC News]. The researchers used extremely thin pieces of nickel as the metal surface on which to grow the graphene, the molecules of which forms a regular hexagonal pattern similar to chicken wire. Afterward, the nickel can be chemically dissolved away, leaving behind pure graphene.

Using standard chip-making techniques, circuit designs are etched into the nickel surface. As the graphene layers form, they take on the shape of the circuit template

The graphene can also be stamped onto polymers with different properties, depending on the intended use. One polymer called PET is flexible, while another called PDMS is stretchable.

The malleable and transparent nature of the graphene-etched polymer could potentially result in foldable displays, flexible solar panels and a number of other electronics applications [CBC News]. A more immediate application might be in

Some believe that high-quality graphene may one day replace silicon-based materials used in semiconductor technologies. But before that can happen, the researchers will have to work out some kinks. So far, the sheets of graphene created with the new technique, described in

[subscription required], are not well-ordered enough for most applications.