New Robot Would Fuel Itself on Grass, Wood, Human Corpses 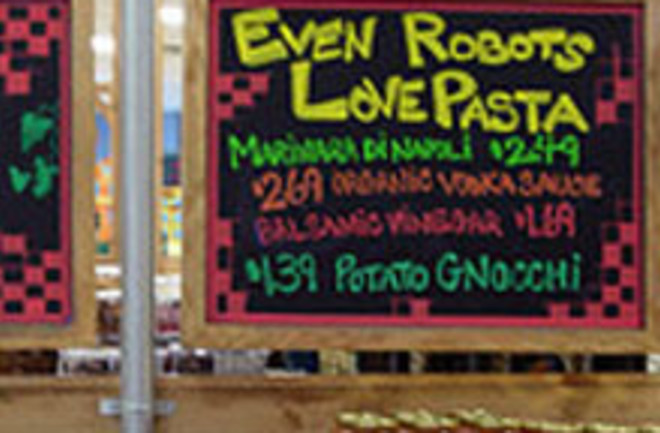 About a year ago, we calmly speculated about the implications that a slug-eating robot might have for us delicious humans. Recently, there have been reports of the development of a steam-powered robot that can fuel itself by consuming any organic material in its path, from leaves to twigs to (gulp) humans. Now might be a good time to panic, at least if you value your body with its flesh intact. According to the developers of the Energetically Autonomous Tactical Robot, appropriately abbreviated EATR, the bot could live independently for years on old furniture, dead animals and, of course, human corpses, which provide the greatest fuel of all. Fox News reports:

EATR... which uses an "external combustion chamber" burning up fuel to heat up water in a closed loop, generating electricity.... Upon the EATR platform, the Pentagon could build all sorts of things — a transport, an ambulance, a communications center, even a gunship. In press materials, Robotic Technology presents EATR as an essentially benign artificial creature that fills its belly through "foraging," despite the obvious military purpose.

Essentially benign? We're not so sure about that. tweetmeme_style = \\'compact\\'; Related Content: Science Not Fiction: Hungry Robots. What Could Go Wrong? Discoblog: New Humanoid Robot Shows More Emotion Than Some Humans Discoblog: Japan’s “Child Robot” Learns to Walk DISCOVER: 20 Things You Didn’t Know About Robots DISCOVER: When Robots Live Among Us